For his last act, Marchionne will outline an EV/hybrid roadmap this week

Investors demand it of outgoing CEO: ‘FCA is way behind rivals’

MILAN/LONDON — Fiat Chrysler (FCA) boss Sergio Marchionne is expected to outline new plans for electric and hybrid cars in a strategy presentation on Friday, aiming to ensure the world's seventh-largest carmaker remains in the race in the absence of a merger.

The 65-year-old will present FCA's strategy to 2022, his final contribution to the company he turned around and multiplied in value through 14 years of canny dealmaking.

After failing to secure a tie-up he said was necessary to manage the costs of producing cleaner vehicles, Marchionne needs to show the group can keep churning out profits on its own, even as emissions rules tighten, SUV competition intensifies and worries around his succession abound.

Marchionne had long refused to jump on the electrification bandwagon, saying he would only do so if selling battery-powered cars could be done at a profit. He even urged customers not to buy FCA's Fiat 500e, its only battery-powered model, because he was losing money on each sold.

But Tesla's success and the need to comply with tougher emissions rules have forced Marchionne to commit to what he calls "most painful" spending.

"FCA is way behind rivals in terms of hybrid and electric vehicles and they need to hit the accelerator to convince investors they can close that gap," said Andrea Pastorelli, a fund manager at 8a+ Investimenti.

Germany's Volkswagen, Daimler, BMW and U.S. rivals GM and Ford have committed to spending billions of euros each in coming years to try produce profitable cars powered by cleaner fuels.

FCA needs to present a clear roadmap, just like Volvo Cars, which ditched diesel from its best-selling XC60 SUV, launched a new electric brand and pledged to shift all brands to hybrid by 2019, a banking source close to FCA said, noting: "The tech divide determines winners and losers in the industry."

Marchionne has already said half of the wider FCA fleet will incorporate some elements of electrification by 2022, while luxury marque Maserati will spearhead FCA's electrification drive by making all new models due after 2019 electric.

But its plans remain vaguer and less advanced than most big rivals and some investors wonder about the capital required to make vehicles compliant, and what share of spending can go to electrification given FCA's numerous demands. 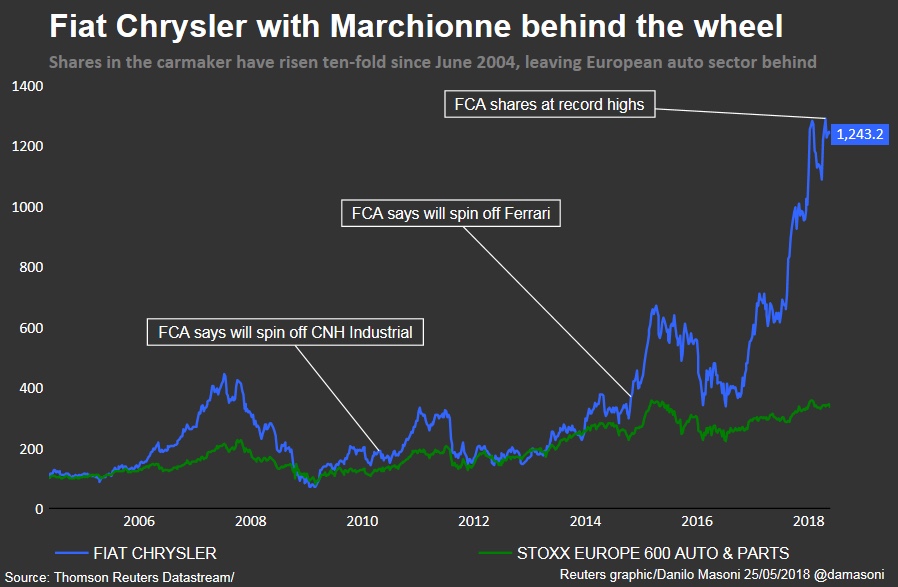 While Marchionne, described by Bernstein analyst Max Warburton as "God's personal gift to auto sector investors," has an impressive track record of creating shareholder value through spinoffs, he has been less successful at delivering a string of ambitious turnaround plans.

Profitability in Europe is only gradually recovering, FCA has yet to make any significant inroads in China and Alfa Romeo — which along with Jeep and Maserati was the focus of the last strategy launched in 2014 — has yet to turn a profit.

The market ridiculed Marchionne's forecast for eight new Alfa Romeos and 400,000 annual sales by 2018. Only two models have hit the road so far as focus shifted to fixing FCA's finances.

But investors take reassurance from what Marchionne achieved in North America, which now makes three-fourths of profits.

FCA retooled some U.S. plants to boost output of lucrative SUVs and trucks, while ending production of unprofitable sedans.

The move got FCA close to erasing the margin gap with its larger U.S. rivals and set it on course to erase debt this year.

Marchionne has set in motion a similar shift in Europe, where Italian plants are being revamped to produce Alfas, Jeeps and Maseratis, while output of some Fiats is being shifted to lower-cost locations elsewhere or discontinued.

This should boost profitability and prevent layoffs that would have been difficult to justify in Italy particularly with populist political parties in the driving seat.

Marchionne multiplied Fiat's value 11 times since he took charge in June 2004, including by spinning off tractor firm CNH Industrial and supercar brand Ferrari.

The pending spinoff of parts maker Magneti Marelli will further up the figure, raising expectations of more deals to come.

Marchionne has ruled out separating the Jeep brand, saying he had to worry "about the stump that's left behind." He also poured cold water on the idea of a Maserati or Alfa spinoff, saying the two needed to become self-sustainable first.

But the doubling in FCA's stock in the last 12 months suggests many still bet on Marchionne doing a final major rejig before he hands over to an internal successor next year.

"Partnerships, a merger, spinoffs and other value accretive deals make up more than 40 percent of the FCA investment case," said Michele Pedroni, a fund manager at Decalia Asset Management.