Now you can rove your land in EV-powered silence BLENHEIM PALACE, England — About halfway through, right as the water touched the top of the wheels, someone made a joke about electrocuting the fish in the Duke of Marlborough's lake with our 2019 Range Rover 400e plug-in hybrid. Despite the 400e's 35.4-inch wading depth — the same as every other Range Rover model — the thought of driving a hybrid SUV through a lake was disconcerting. In the end, the fish were fine. We can't say the same for some of the Duke's pheasants.

This plug-in hybrid is the latest variant of the full-size Range Rover. It pairs a 85 kW electric motor with a 296 horsepower, 2.0-liter turbocharged four-cylinder for a total system output of 398 horsepower and 472 pound-feet of torque. The 400e has 31 miles of all-electric range and EV mode is available up to 85 mph. 60 mph goes by in just 6.4 seconds — quicker than the gasoline V6 model — thanks to copious amounts of off-the-line torque. Power is sent to all four wheels through a ZF-designed eight-speed automatic.

Land Rover wanted to make it clear that the 400e was just as capable as every other Range Rover model, hence the water hazard, muddy hill-climb, and a trek through a field that smelled not-so-faintly of manure. Everything you would expect from a Range Rover is here, from the Terrain Response traction settings to the air suspension to the leather seats that coddle you like the landed gentry you aspire to be. 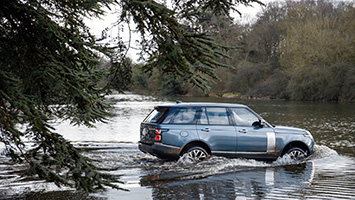 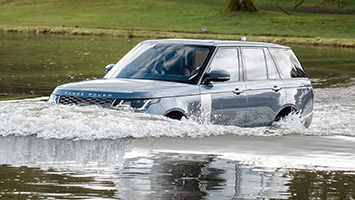 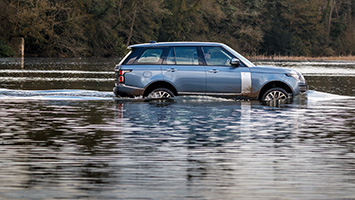 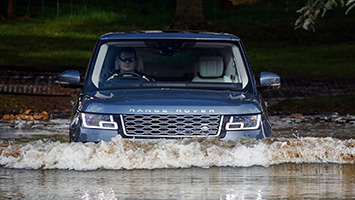 For 2018, the Range Rover was updated with new lighting both front and rear, a new grille, and revised front and rear bumpers. Inside, all Range Rovers now have the two-screen infotainment system from the smaller Range Rover Velar. It's a welcome upgrade, though it still lags behind Mercedes-Benz Comand, BMW iDrive and Audi MMI. The interface occasionally stumbles and lags and some basic controls are hidden in sub-menus.

The comfortable seats get additional padding and adjustable massaging functions. Checking the box for the Executive Seating package gives front and rear occupants wider, softer and more adjustable seats. It's worth it if you're considering the long-wheelbase model. The extra legroom provides space for a folding footrest. It's the most comfortable back seat this side of a Mercedes-Maybach.

In almost every aspect, the 400e is indistinguishable from its non-electrified counterparts. Visually, the only things that give away the PHEV from its siblings are the 400e badge on the back and the panel in the grille that hides the charging port. Inside, you'll find a power meter has replaced the tachometer and an EV mode button has been placed on the console near the terrain select knob. That's it. No green or blue badges, no aero wheels with questionable designs and no unique front fascia. It simply looks like any other Range Rover. We think the subtlety is a good thing. 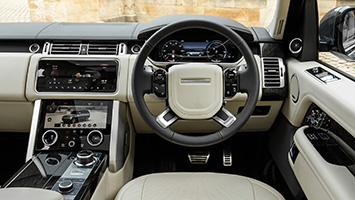 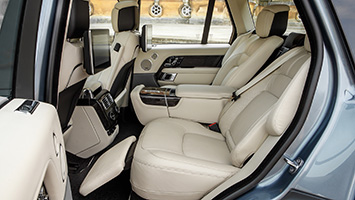 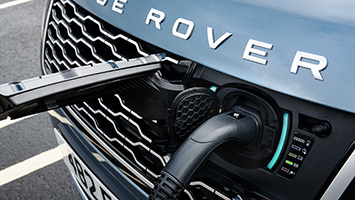 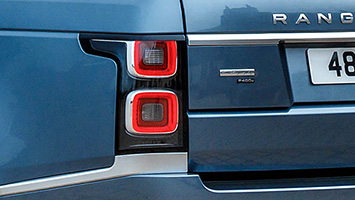 It drives like one, too, most of the time. Because the electric motor is housed inside the transmission, the 400e is capable of all-electric four-wheel drive running. When wading through water, Land Rover suggests keeping the engine running and not crossing water in EV mode in order to keep liquids out of the exhaust system.

The low-end torque is a boon off road. There's always power when you need it, so charging up hills or plowing through mud simply requires dipping into the throttle and holding the wheels in the ruts. Straight off the line, the 400e feels just as strong as a Range Rover with the supercharged 5.0-liter V8. It dies off mid revs, but around town it feels right at home. Passing on unfamiliar roads can be harrowing, but the 400e's torque makes it a breeze.

Like every other Range Rover, the sound isolation is fantastic. This is made abundantly clear when driving in EV mode. The 400e feels like a rolling whisper room, with just a small hum from the electric motor and the occasional vague woosh from a passing car. Driving through small English villages with in pure electric mode give you a relaxed and cozy feeling. This calm is occasionally broken up when the gasoline four-cylinder kicks on. The engine is quiet most of the time, but under full throttle it sounds rough and feels distinctly out of place. At least it doesn't hold revs like cars with CVTs. 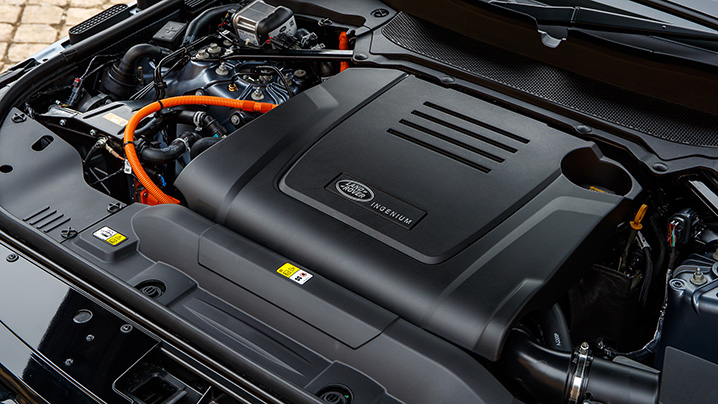 There are downsides to driving like a Range Rover, too. Despite all of the aluminum, this is still a 2.5-ton SUV. Most of the time, it hides its weight well, but occasionally an off-camber corner or uneven road will really make the 400e wallow like a drunk on the teacup ride at Disneyland. It's not as composed as some lighter or sportier SUVs, so you have to dampen your speed a bit.

The ride is on the firm side, too. Engineers had to stiffen things to account for the extra weight from the battery out back — 200 pounds more than a V8 and 500 pounds more than a V6. It's the worst-riding Range Rover this side of an SV-tuned product, but that's like saying " Punch-Drunk Love" is the worst Paul Thomas Anderson film — it's still a cut above most everything else out there. The 400e is better than a body-on-frame SUV like the Cadillac Escalade or Infiniti QX80.

All that said, the brakes work well given the amount of mass they're being taxed with. Better than average for a hybrid. There was no noticeable low-speed modulation problems like on other regen systems, and they never had any issues slowing down this much mass. They likely saved the lives of a few turkey-sized pheasants crossing the road, though not every bird made it through unscathed (it wasn't us, though we can't rule out anyone else). 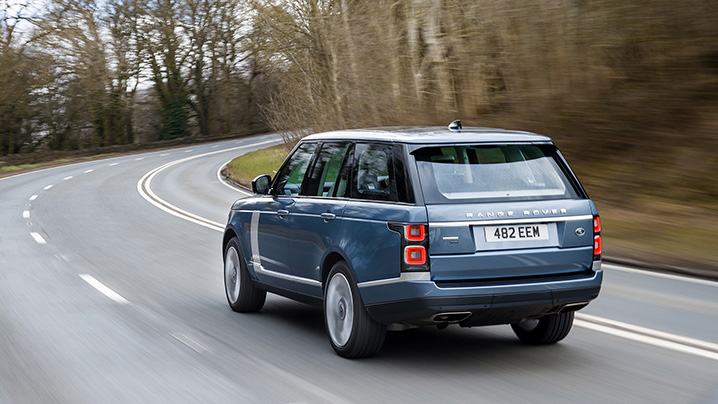 Nothing else on the road looks, feels or drives quite like a Range Rover. The company was building refined SUVs for wealthy landowners before the phrase "sport-utility vehicle" was ever coined. The 400e plug-in hybrid builds on what Land Rover has been doing for nearly 50 years. It's simply a Range Rover that packs a powertrain that's far more in touch with the times than a supercharged V8 or turbocharged diesel.

There's no eco-friendly styling or gimmicks. It doesn't have to shout or make a big fuss about its hybrid powertrain. It simply goes about its business quietly and competently, as you would expect from any non-SV Range Rover. The fact that you don't lose any of the Range Rover's core capabilities is a huge plus. Yes, the ride is a bit firm, and the four-cylinder occasionally breaks the tomb-like isolation, but the tradeoff in fuel economy can't be overstated.

The biggest issue the 400e has is Jaguar Land Rover's wonderful 5.0-liter supercharged V8. Luxury vehicle owners don't want to make excuses or justify their decisions. It's the reason you should buy a V12 Mercedes-Maybach over the V8 version. You never need to explain a V12 badge. It speaks for itself.

Around the city, it feels just as powerful as the V8 model, so you don't feel like you're losing anything there. Running silent is hugely comforting and something you can't do with the V8. There's also the green cred that comes along with driving a plug-in hybrid. Unlike the diesel or V6 Range Rovers, the 400e makes more of a case for itself than simply resting on its improved fuel-economy laurels. Convincing owners that they don't need a V8 will be the 400e's biggest task.