Getting the fundamentals right We test a lot of fancy, complicated cars here at Autoblog. Most of the cars that come in are high-trim with as many options as possible. That's why it was rather refreshing when Hyundai sent us its new Accent in the most basic possible form, the Accent SE. It's the bottom of the Accent line starting at $15,880. There are no options available when building one out on Hyundai's website, and according to the window sticker, the only extra added to it was a set of carpeted floor mats. The only potential problem with such a basic car is that there's nothing to make up for a poor driving experience. Thankfully, that's not the case with the Accent. It's a strong value that offers a comfortable and even sometimes fun driving experience. It even provides just enough features to not feel like a total penalty box.

Being the SE trim level, our Accent was quite unadorned. It had steel wheels with plastic wheel covers, no fog lights, nothing extraneous. Despite that, it wasn't a bad-looking little thing, sporting slightly shrunken Elantra looks that aren't too far out of proportion. Appealing to this editor was the manual transmission, which is only available on this bare-bones trim.

The interior feels about as basic and cheap as the exterior, and is easily one of the weakest points of the little car. The dash and door panels look as though they were molded as one unit from the same hard black plastic. There are only a couple of light gray trim pieces to keep it from looking too bleak, but it feels like a somewhat half-hearted attempt. The good news is that Hyundai doesn't completely penalize you for picking the base trim level. You still get the necessities such as cruise control, power windows and locks, air conditioning, USB and Bluetooth connectivity, six-way adjustable seats, and even hill start assist and rear-view camera. In the Accent's cousin, the Kia Rio, you miss out on the cruise control and power windows and locks. But in the Rio's favor is a far more stylish design that shows cheap materials don't have to be drab and dull. All the Accent's controls feel good and are intuitive, though, which is something fancier cars can't often say. 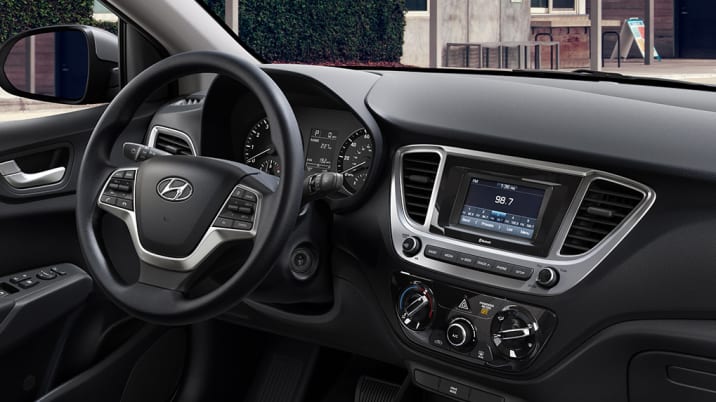 Where the Accent falls short in visual impressions, it makes up for them on the drive. Most impressive is the car's ride quality. We're at the peak of southeastern Michigan pothole season, and the Accent handled it with aplomb. It cruised right over bumps without jarring, shuddering or vibrating. And while smartly soaking up bumps, the body stayed steady and controlled without any sort of float. There isn't much penalty concerning handling, either. Body lean is minor, and the car doesn't get squirrelly over mid-corner bumps. The limits do come up fast though on its little 185/65R15 tires, and the front doesn't feel especially eager to turn-in.

Another strong point is the Hyundai powertrain. It has only a 130-horsepower 1.6-liter four-cylinder, but coupled with the six-speed manual, it's punchy enough to zip through city traffic and hustle up on-ramps in reasonable time. The engine itself is a bit buzzy, but tolerable, and it provides 28 mpg in the city and 37 on the highway with the manual. The automatic adds another mpg to the highway number for 38. The manual shifter is a pleasant surprise. It's smooth, light and precise. Coupled with well-placed pedals, a firm communicative brake pedal, and a responsive throttle, it was easy to do some heel-and-toe shifting and actually have a fair amount of fun driving this little car. The only letdown was the steering, which was average at best. It's weighted fine, but it's numb and a bit imprecise, so it's hard to know where the front tires are pointing and what they're up to.

There's only really one other complaint I have with the Accent, and that's the noise. In addition to the somewhat buzzy engine, wind noise comes through clearly at high speed, with some pronounced whistling around the pillars and mirror. But the worst is the road and tire noise, especially over bumps. It's very boomy when bouncing off them. So you'll probably want to keep the stereo turned up.

Pricing is one final advantage for the Accent. Its tested price of just under $16,000, including destination charge, is cheaper than a similarly equipped Ford Fiesta, Chevy Sonic, Honda Fit, Toyota Yaris iA or Nissan Versa Note. The same goes for automatic-equipped versions of those other cars, but the Hyundai slips over the $16,000 mark there. The Mitsubishi Mirage and Nissan Versa sedan can claim better pricing, but they're also much worse cars. But if you want a manual transmission and more features, the competition pulls ahead since many don't tie the stick to the lowest-level car. Hatchback fans will also have to look elsewhere, since the Accent has lost its hatch option.

All in all, though, the Accent presents a solid package that will do everything you need it to do while delivering a pleasant, sometimes fun, driving experience without costing much money.

To compare the Accent and other vehicles at its price point, check out Autoblog's car comparison tool. And here are our galleries of best cars costing $15,000 and $20,000: