This never-registered 1997 McLaren F1 is for sale, if you have the cash

This is the automotive equivalent of being mint in the package. As many of you readers may know, when it comes to Hot Wheels and Matchbox cars, they're always worth more over time if they remain in their protective packaging – especially rare or unusual models. Clearly the person that ordered this 1997 McLaren F1 had that mindset, and we wouldn't be surprised if the same principle will apply to this car.

This 1997 McLaren F1, previously reported on by Autoweek and being sold by U.K. dealer Tom Hartley Jnr, is remarkable because it has just 148 miles on the odometer, which the dealer claims is the lowest of any F1 in the world. Apparently the owner didn't even register the car for driving on the road. Not only that, but the car is basically in the condition it was in when it left from the factory. Everything on it is well-preserved because nothing has really been used, and everything is still carefully wrapped up in its protective packaging. The dashboard, floors and seats are all lovingly (obsessively?) taped up in foam and plastic. The floor mats are still in their plastic wrap, never having been used. The same goes for the car's fitted luggage and specially ordered F1 LM-style exhaust and F1 GTR-style suede removable steering wheel. 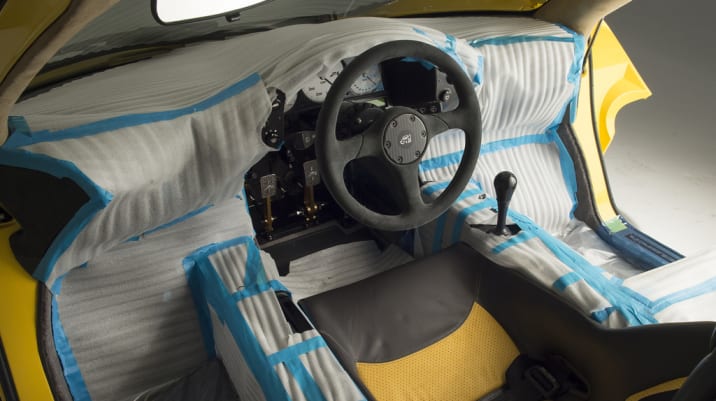 Of course other trinkets remain with the car, too, but have since lost their protective trappings. The car comes with the matching Tag Heuer watch with the car's serial number on it, the complete tool cabinet, on-board tool roll and build book. The car was built for a buyer in Japan. Amusingly, this car is listed as a "right-hand drive" model for that market, which is irrelevant considering the car's center driver's seat. One other custom touch to the car besides the exhaust and steering wheel is the carbon fiber seat with yellow center accents.

Tom Hartley Jnr does not have a price listed for this F1. We're willing to bet that the dealer will be expecting some extraordinary offers, though. Recently, the first McLaren F1 imported to the U.S. went for the whopping cost of over $15 million. That car was likely boosted by provenance and the inclusion of unique U.S. homologation parts, but it also had seen plenty of use with an odometer that had clicked over 9,600 miles. Though this yellow model doesn't have special history like that one, the fact that it's effectively a new car as delivered from the factory should make it extremely valuable.