It can be anything you want or need In what's something of a throwback to the GM Autonomy concept of 2002, GM has revealed another hydrogen fuel cell platform that's effectively flat and can accept just about any body. It's called SURUS, which stands for Silent Utility Rover Universal Superstructure. But unlike the Autonomy, General Motors sees the SURUS as being capable of much more than just transportation.

This is because of a couple of key features. First, the SURUS uses strong, durable truck components sitting on big knobby truck tires, so it can handle heavy loads, and it can go almost anywhere. Second, the SURUS is capable of autonomy, which permits a few interesting possibilities. It wouldn't have to have someone capable of driving it, meaning anyone could use or request one. It also wouldn't have to have a compartment for a driver and controls, opening up more space for other uses.

As such, General Motors envisions the SURUS as being able to handle construction and military transport and hauling duties. But, as illustrated in the photos above, there's also the possibility that it could be used as a self-driving transport for cargo on Interstates or in shipping yards. It could become a mobile medical unit, using all of its space for treating patients and carrying supplies. GM also suggests it could be used as a mobile power generator, bringing electricity to remote or disaster-ravaged regions. 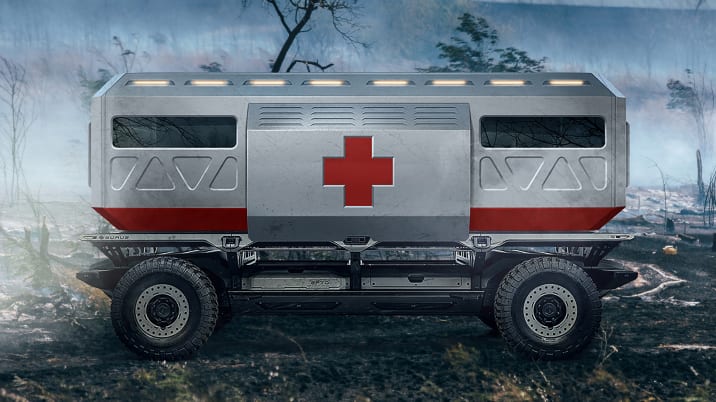 As an aid or relief vehicle, the SURUS has other advantages. Its fuel-cell powertrain, which has storage for 400 miles worth of hydrogen, is quiet and could be used as a generator. It could even be used inside because it doesn't release any dangerous fumes. It also generates water as a by-product of operation, which could possibly be handy in areas in need of water.

Coming back to heavy-duty needs and military possibilities, the SURUS's design and powertrain have other advantages. Its two electric motors provide plenty of torque for heavy loads and off-roading. It should be very maneuverable thanks to four-wheel steering. And specifically for military purposes, the quiet operation and power generation would be a major benefit for running missions in remote areas and when stealth is necessary, advantages pointed out when the Colorado ZH2 military concept was revealed.

It may still be a while before we start seeing these wheeled platforms roving roads and non-roads, though. General Motors hasn't given a tentative launch date for such a vehicle.