Alex Kierstein
Mazda has cracked the code on a compression-ignition engine, called Skyactiv-X (which utilizes SCCI, or Spark Controlled Compression Ignition). That's a neat engineering accomplishment, sure, but why is the tiny company investing big dollars in fancy tech that's frustrated the much larger companies who've investigated it? In this case, Mazda is peering into a crystal ball to consider how best to flow with a few troubling tides. One is the premature handwringing about the death of the internal combustion engine, another is Europe's swing away from diesel engines.

Skyactiv-X seems, at this juncture, a hedge bet against both aspects. EV infrastructure lags massively behind our petroleum infrastructure — no shock there. Mazda claims the tech will net 20-30 percent gains in fuel efficiency over its current gasoline engines and about matching its diesel engine. And that's without any onboard hybrid tech, so that staves off the inevitable necessity to fully adopt electrification for a while — this is assuming that, at some point, it won't be practical to sell a non-hybrid or non-EV. At what date that happens is open to debate, but as I said above, technology like this kicks that decision point down the road a bit. Mazda is here translating research dollars into time, allowing its engine factories a few more years of probably profitable production of internal-combustion engines before retooling, and before somebody needs to pour a massive amount of money into a broad EV charging infrastructure to replace gas stations. None of this is happening fast enough for a wholesale transition to EVs anytime soon. So, that's one bet hedged.

The next is Europe's declining interest in diesel engines for mainly health reasons. Just about a week ago, The New York Times posted an excellent primer on this issue, which is somewhat controversial in Europe. Germany's auto industry, a huge portion of its economy, is heavily invested in diesel tech and seriously opposed to proposals in Britain and France to eliminate the technology, which creates unhealthy diesel particulate emissions. The German industry is hoping Band-Aids like pollution-reducing measures will help them, but after a massive and widespread emission cheating scandal, its credibility is at a nadir. It seems like consumers have sensed which way the wind is blowing, and it has hurt sales. The NYT reports that diesel sales in Germany alone — remember, bastion and originator of diesel technology — are down 13 percent. 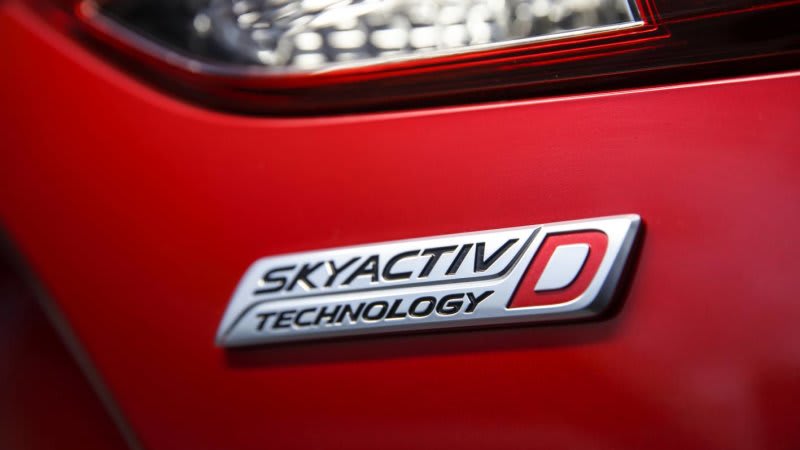 Mazda has a diesel powertrain in the rest of the world, a 2.2-liter unit known as Skyactiv-D, and it's been a rocky road for that motor. It's faced some issues that have led to delays (and more delays) in its introduction here, first in the CX-5 later this year (probably), although it was originally going to show up in the Mazda6 ages ago. Mazda isn't a volume player anywhere, so maybe transitioning away from the Skyactiv-D to the less controversial, gasoline-fueled -X engines in Europe progressively will reduce risk.

As an aside, this -X news made me wonder if perhaps Mazda would skip the -D in the U.S. altogether and leapfrog right to the SCCI technology. I asked a Mazda rep, and he said that's not the case. They view Skyactiv-D as "a pillar towards getting to [Skyactiv-X]". By offering both powertrains at some point (he wouldn't say when, exactly, Skyactiv-X is coming to the U.S., but implied there will be some overlap), Mazda will offer "a greater variety of engine options to customers who have different needs and expectations." As for the diesel CX-5, it's still working through its EPA and CARB certifications, so it's still apparently on track for going on sale in late 2017 — maybe. In any event, I expect the Skyactiv-D to have less than 10 percent take rates in the U.S., but Skyactiv-X has much more potential.

So that covers hedging on diesel fuel. Now what about the much-discussed death of internal combustion, the complete transition to electric powertrains? Mazda has long resisted electrification, and that's admirable not simply because I like gas engines, but also because it's forced the company to think strategically about how to utilize limited resources. Mazda is a tiny company. Its Skyactiv-G direct-injection, high-compression gasoline engine is one of the best of its type around, and that's all Mazda. It offers fuel economy formerly reserved for miserly turbodiesels by using an extremely high compression ratio (14: 1, roughly, but 13:1 here in the U.S. so we don't have to run premium gas). This is all the result of some clever thinking and probably lots and lots of iteration, but it's also all intended to set the stage for sparkless ignition.

That's right: Skyactiv-G has always been a stepping stone. And Mazda's been thinking about compression-ignition since 2010. Our friends at Car and Driver covered this in great detail back then, and their deep-dive into the technology when it was new is both an excellent resource for those interested in the tech, but it also details exactly why Mazda skipped the "downsize and turbocharge" format. The flow requirements of compression ignition preclude tiny engines running lots of boost to make power. This may be why Mazda will turn to supercharging for its Skyactiv-X, which will help provide flow even at low RPM. If you want to read more about the groundwork for Skyactiv-X, please go read Dave Vanderwerp's piece.

The takeaway here is that by limiting itself, investing in "conventional" internal-combustion engines, Mazda has given itself the motivation to innovate. It must, or it'll die. Perhaps it can also sell the new technology its developed to other automakers once the writing is on the wall for diesel. And its new partner with massive resources, Toyota, could easily be a force multiplier here, licensing the tech perhaps.

And let's not forget, despite Mazda's commitment to piston engines that led to this breakthrough, it's even hedging on this by gaining access to Toyota's considerable EV knowledge and equipment. Toyota's upcoming solid state battery is an equally monumental coup in the EV world. If the two companies can effectively scale and leverage these two technologies, the diesel-addicted German companies need to watch out. They might get outmaneuvered.