It's OK if you haven't yet nailed down the name of this one. Porsche Panamera Turbo S E-Hybrid is a mouthful for sure, but it's also a big moment for Porsche. The former top-tier Turbo S model sports a hybrid system for the first time, an obvious sign of how Porsche will electrify its future.

Thanks to the gone-but-not-forgotten 918 Spyder supercar's high-performance hybrid system (and the less powerful Panamera 4 E-Hybrid that utilizes a V6) this isn't new ground for Porsche. Even so, company officials still want to ease people into the E-Hybrid addition. Think of the Turbo S E-Hybrid as the heir to the 918's technology and spirit, rather than a ploy to cut emissions on their most potent and expensive Panamera.

The Turbo S E-Hybrid takes the Panamera Turbo's already thunderous 550-horsepower, 4.0-liter twin-turbo V8 and mates it to a 136-horsepower electric motor, for a combined output of 680 horsepower and 626 pound-feet of torque. That's a bit more than 200 horsepower shy of the 918, but a startling amount for any regular production car – let alone one that happens to be a hybrid. 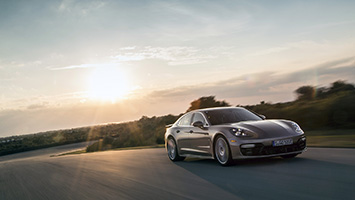 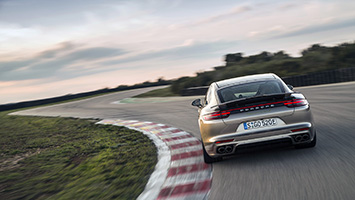 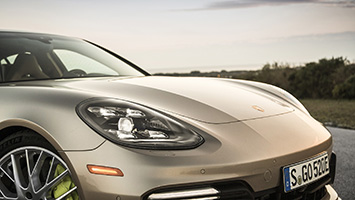 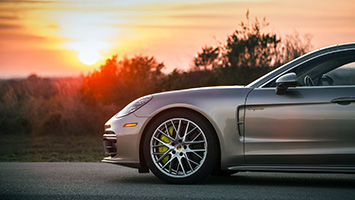 We had some time with the Turbo S E-Hybrid at Vancouver Island Motorsport Circuit for just a taste of what this big liftback can do when pushed. Predictably, the results are spectacular – in more ways than one.

The Panamera Turbo already had ample thrust off the line, but adding a stout electric motor to the package makes the initial launch even more breathtaking. Porsche engineers credit the 8-speed PDK transmission that's in all Panameras for drastically cutting friction versus a torque converter automatic, and keeping the car in the right gear depending on conditions. In the most aggressive drive settings, playing with the shift paddles yourself seems like a sure way to get slower lap times.

Then there's the handling. The Panamera's abilities are unsurprising, given that the Turbo S E-Hybrid comes standard with the three-chamber air suspension, Porsche Dynamic Chassis Control Sport, Porsche Torque Vectoring +, 21-inch wheels and carbon ceramic brakes with acid-green calipers – all of which are usually options on lesser Panameras. But the Turbo S E-Hybrid's talents are still admirable given it weighs more than 5,000 pounds and is 16.5-feet long. The Panamera isn't as enjoyable on a track as, say, the 911 Turbo S that we were following around, but you can't help but admire it. 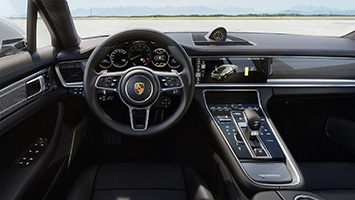 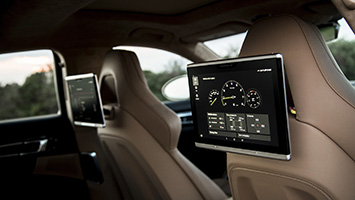 As the top Panamera, however, the Turbo S E-Hybrid is likely to find itself heavily optioned with leather and cosmetic treatments that will do nothing to enhance its performance on a track, because it likely won't ever be driven there. This is where the E-Hybrid part of the name suggests that the Panamera may have split personalities.

Leave it in Sport Plus from the track, and the Turbo S E-Hybrid is still tenacious as it gobbles up mile after mile, but it isn't as frenetic as its name suggests. Put your foot down, and the V8's intoxicating sounds swell as the rate of speed rises quickly. Turn to the hybrid or electric modes, however, and things are slightly less rapid, and you're at risk of running out the 14-kWh battery in a hurry (Porsche claims a 31-mile electric range on the EU cycle, with EPA numbers still pending).

Of course, driving the Turbo S E-Hybrid in crowded city isn't as enjoyable as it is in wide open areas, even if you enjoy the near-silence of keeping it in electric mode. The car's bigness is impossible to ignore at low speeds, though your rear passengers' legs will appreciate that. The Turbo S E-Hybrid is also available in the larger, rear-seat-oriented Executive model, should you need to make both your Panamera and its name even longer. A Sport Turismo version would be a logical variant at some point down the road, especially after a Porsche rep didn't outright deny the possibility of such a car. 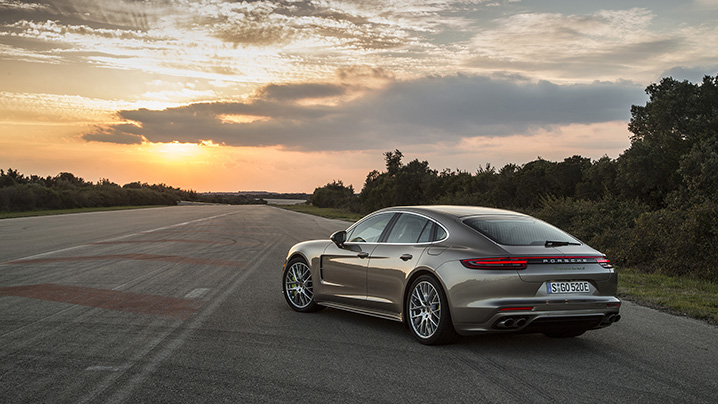 For now, at least, the $184,400 Turbo S E-Hybrid has few four-door rivals. There's still no BMW M7 and a performance version of the just-announced 2019 Audi A8 has yet to be announced. The newly revised Mercedes-AMG S 63 is does the luxury part well and actually has more torque than the Panamera, but weighs nearly as much and doesn't defy Newtonian physics quite like the Porsche does around a track.

Which is a great achievement for Porsche. Some kind of packaging miracle would be needed to fit this setup in a rear-engined car, but it doesn't seem crazy for an upcoming 911 Turbo S to follow the Panamera's performance-hybrid lead. It might be a mouthful, but both parts of the Turbo S E-Hybrid complement the other, on the track and on the road. It's still a sports car first, a luxury car second, and a high-tech object of desire third. Watch your six, Tesla.

But for today, the Panamera Turbo S E-Hybrid benefits from hypercar trickle-down technology to shine as Porsche's futuristic four-door electro-supercar.