Of course environmental factors are the reason the 2018 Panamera 4 E-Hybrid exists, and plug-in hybrid benefits are no accident. But Porsche engineers approached the new E-Hybrid system with a goal to enhance the engine's power any time it's active, not to replace internal-combustion output with juice. This is a departure from most hybrids, including the last Panamera E-Hybrid. In the previous plug-in Panamera (second in the lineage), three conditions had to be met before any electric power was added: the car was in Sport mode, you pressed the accelerator more than 80 percent of the way, and you pressed through that travel quickly enough. You had to really want it, and the system had to want to give it to you.

Porsche's new E-Hybrid system borrows the boosting strategy used on the 918 Spyder – hit the throttle in anything but electric-only E-Power mode and you get a combination of engine and motor power. Instead of the old Aisin automatic transmission that was unique to the last E-Hybrid, the new car uses a version of the eight-speed dual-clutch transmission used on all other Panameras. All-wheel drive is now standard (hence the 4 in the name) to appeal to more snow-staters, whereas before only rear-drive was offered due to packaging constraints – there wasn't enough room for the front driveshaft on the electrified Panamera. 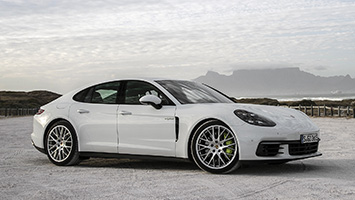 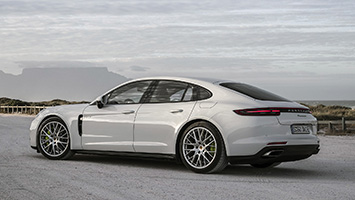 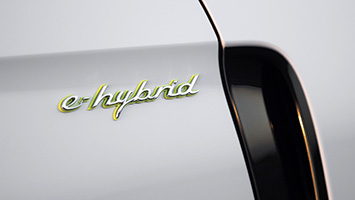 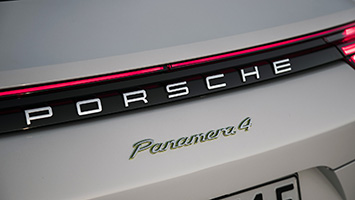 Transmission swap aside it's the same basic powertrain setup in this Panamera, with an electric motor sitting between the engine and trans. That electric motor is now more powerful and battery capacity is up by about half, from 9.4 kWh to 14.1, though the new battery weighs the same as the old one. A full charge takes 12.5 hours at 120 volts, or 2.4 hours if you have the optional 7.2-kW on-board charger and a 240-volt hookup. On the European test cycle, it returns about 32 miles of electric-only driving.

The E-Hybrid's engine contributes the same amount of power as a standard Panamera 4's single-turbo 3.0-liter V6 (330 horsepower and 331 pound-feet of torque) but it's a 2.9-liter twin-turbo six instead, a detuned version of the Panamera 4S engine. (Yes, two different engines with the same output ratings is weird.) With the electric motor factored in, the E-Hybrid powertrain puts out 462 hp and 516 lb-ft, increases of 46 hp and 81 lb-ft over the last E-Hybrid. Imagine them written in Acid Green, because these aren't power levels you usually associate with hybrids.

And with those improvements, the new E-Hybrid is quicker than before. As long as there's charge left in the battery, it will beat the lighter Panamera 4 in an acceleration fight, hitting 60 mph in 4.4 seconds compared to 5.0 for a Panamera 4 with launch control and 5.2 seconds for the outgoing E-Hybrid. The Sport Chrono package is standard on all 2018 E-Hybrids, which means launch control comes on each one as well. On a launch-control start, the E-Hybrid provides the familiar feeling of having your internal organs rearranged for a moment, but after the initial hit of acceleration there's a pause, where it feels like the complex powertrain takes a breath, shifts up a gear, resets its electric motor, and then continues on. It's not bad, just different. 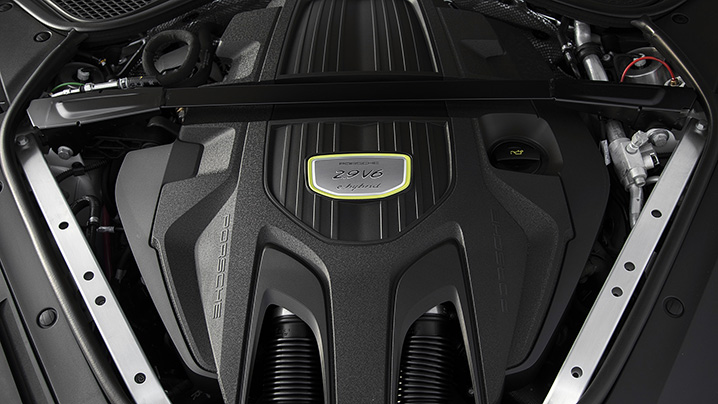 You also notice the hybridity under normal full-throttle acceleration, where the gasps and whooshes of the turbos and exhaust are split by electric-motor whirrs that are surprisingly audible. The motor noise stands out more here than in a full EV because it's a momentary surge instead of a building spinning sound, since the electric motor's output is being fed through a multi-speed transmission and therefore has to pause in between gears along with the engine. Again, not bad, but different from the standard Panamera experience.

The electric-only E-Power mode is, of course, the biggest departure from regular Panamera driving. It's active every time you start the car and otherwise selectable with the E position on the steering-wheel-mounted dial. When running electrically, there a physical detent in the throttle pedal travel that marks the threshold to engine activation – you can push through the stop like a kickdown switch. The car feels surprisingly normal when running under electric power, with adequate acceleration for around-town work, and it's not that hard to keep the engine from lighting right up to the electric top speed of 86 mph. The transmission and its shifting help, both in keeping the engine off and giving a familiar feeling to the experience. The E-Hybrid acts more like a quiet luxury car with Acid Green trim than a big EV in this mode.

Two more electro-friendly modes can only be accessed through the central 12.3-inch touchscreen: E-Hold and E-Charge. As you might guess, E-Charge runs the engine to top up the battery, while E-Hold allows you to save your current state of charge for later – say a low-speed drive through town or to sneak back into the garage at night without waking your nosy neighbor. 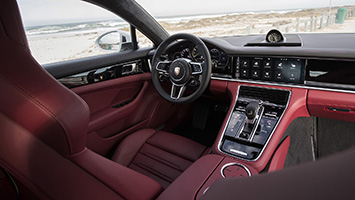 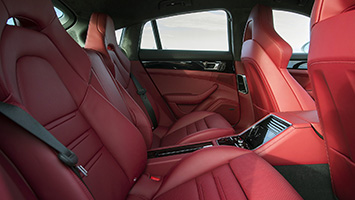 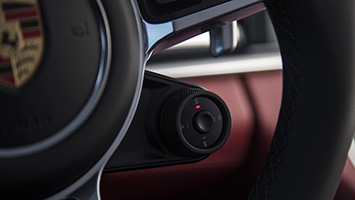 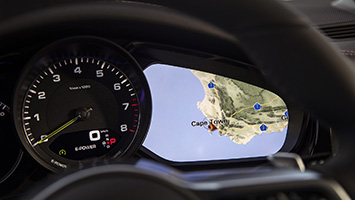 Hybrid Auto mode is the default when once you've run down the battery, so for many drivers it will get the most use. It works like most hybrids, using the engine or electric-only power as needed but slightly smarter: the Panamera E-Hybrid uses nav data to make those choices when you have a route set, similar to how the optional InnoDrive system anticipates elevation changes and curves for cruise control. The engine is quiet enough at low revs, and the stop-start system so vibration-free, that you neither hear nor feel when combustion ceases or reignites. Contrast that with the 918 Spyder, which shouts in your ear every time the engine cracks to life. In the Panamera, you have to look down at the tach occasionally to check if the engine is running.

Once the revs pick up, the engine provides a pleasant performance-appropriate soundtrack much like the one from the Panamera S with the same engine. And you can now get the electronically controlled Sport Exhaust system, just like on other Porsche models, if you really want to hear the engine when it's actually running.

Sport and Sport Plus keep the engine on, both to preserve electric charge for when full power is requested and to provide the quickest response. We didn't find much need for either mode in normal driving, instead preferring to hit the Sport Response button in the center of the mode dial for a 20-second burst of the powertrain's full attention and then letting the car relax back into whichever mode it was in prior. Sport Response is also effective in waking up passengers, who may have a tougher time relaxing back into their own previous mode.

Air suspension is standard on the hybrid, and the car rides and steers much like the other Panamera models. The added weight of the hybrid components is barely felt in most situations. There's none of the shudder over bumps or transitional roll you get with some smaller battery-filled cars, in part because the Panamera is relatively big and its battery relatively light.

To us, the most interesting aspect of the Panamera E-Hybrid is its braking system, which goes the complex route to feel simple. It's also the piece that could use the most work. Here the E-Hybrid again takes a page from the 918's book, using a brake pedal linkage that passes through an electromechanical box of magic that is in turn connected to a master cylinder. The special master cylinder can circulate hydraulic fluid within itself instead of sending it out to the mechanical brakes, which is what it does when the brakes are in regen mode using only the motor, up to 0.3 g of deceleration. The upshot is that your foot is always moving hydraulic fluid and, in theory, the magic box can vary brake assist force so you can't tell the difference between regen-only and mechanical braking.

It does that in most situations, but when the car is about to come to a stop – say, the last ten feet or so – you get nonlinear pedal force, either it goes soft when you don't expect it to or it briefly firms up, while the brake response remains linear. Even with these faults, the system still beats most hybrid brakes. And we have some hope that the E-Hybrid's brakes will improve, because 918 prototypes exhibited similar pedal feel that was smoothed out with subsequent updates. Luckily there's the available Traffic Jam Assist to modulate the brakes in stop-and-go traffic without your feet getting involved, and it does so with no jerkiness at all.

Those really concerned with how their E-Hybrid stops can choose the Porsche Carbon Ceramic Brake (PCCB) option. The standard calipers and the larger ones for the carbon brakes come painted Acid Green, just like the ones on the 918. If you want to tone it down a little, black standard calipers and yellow PCCB calipers (okay, not that toned down) are a no-cost option. This is a marked change from Porsche's original policy on hybrid brake colors, including the 918 Spyder, which originally had mandatory Acid Green caliper paint. 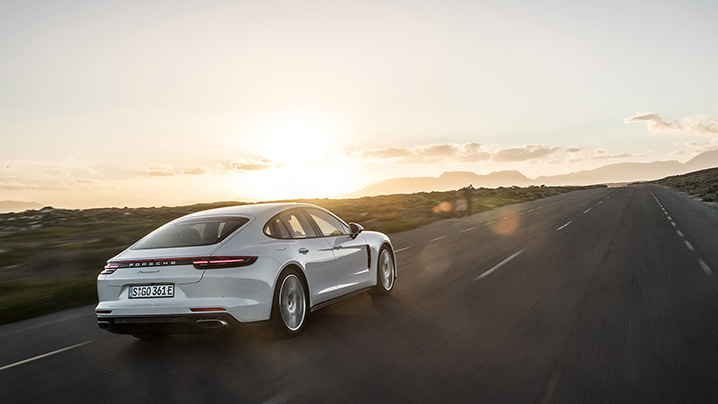 You'll still see Predator-blood touches around the interior, mainly on the gauges, as well as on the exterior E-Hybrid badges and the Panamera 4 script on the back (the latter of which can be omitted with no-cost badge delete). The body doesn't differ from a standard Panamera's – there are no extra aero tweaks like on other hybridized models. And the interior has the same design and pile of tech, including the big center display, reconfigurable gauges, mix of haptic and non-haptic center-console "buttons," and disappearing cup holders.

The E-Hybrid's price doesn't stray much from a regular Panamera 4's either. The base MSRP of the nonhybrid car is $90,650 while the 4 E-Hybrid stickers for $100,650 (or $105,150 for the long-wheelbase Executive model). But when you factor in items that are standard on the hybrid and optional on the other car – Sport Chrono and air suspension – the price difference is $5,545. So yes, it's still a good chunk more, but the plug on the right rear fender means you may be entitled to federal and local tax breaks or rebates. And that Acid Green trim is priceless, whether you like it or not.

If all you're concerned about is performance, the quicker and more powerful Panamera 4S is only $300 more than a 4 E-Hybrid. It acts more like a normal car because it is as normal a car as you can buy at the price with four doors, a hatchback, and the looks of a sports car. But we can understand preferring the hybrid, either for the electric-only driving or the general whiz-bang neatness. Those who fall in that camp will be able to pick one up this summer. 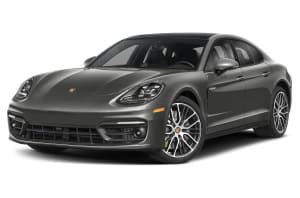