A luxury sedan can't get by on mere posh and power anymore. Intelligent technology has joined the equation.

I'm riding in the backseat of the 2018 Mercedes-Benz S560 when my driver peels his hands off the wheel and glances sideways. Relying on the car's lane guidance and adaptive cruise control systems, he allows our big sedan to drive itself through an unprotected intersection at around 60 mph. Without warning, a car emerges and crosses our path, and we come frighteningly close to slamming into its tail until the Benz suddenly jams its brakes, lets the car pass, and resumes its path.

The harrowing near-miss was staged by Mercedes-Benz on an airfield outside of Stuttgart, but the message is clear: Not only did the S560 successfully avoid a potentially fatal collision, it had the brains to calculate the car's speed and direction, anticipate the potential impact, and apply brakes before resuming its trajectory. During another drill, our S-Class avoided a T-bone accident by coming to a shockingly abrupt stop; yet another alternately timed exercise recognizes the cross-traffic threat but glides past it without consequence. In all, these eye-opening simulations signal significantly sharper tech in Mercedes-Benz's flagship sedan. 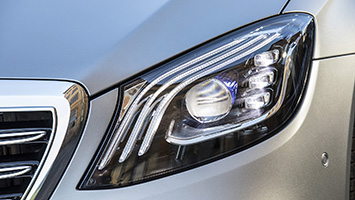 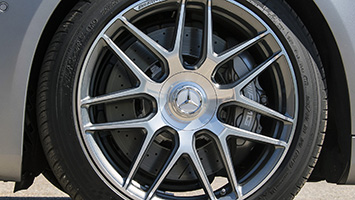 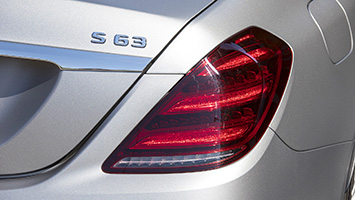 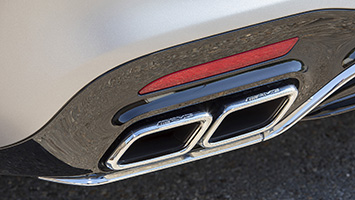 Not long ago, luxury flagships adhered to the simple formula of big engines and plush, amenity-laden interiors. While the new 2018 S-Class still targets optimal poshness starting at around $100,000, the mid-cycle refresh focuses on building a smarter sedan around three new engines whose model names happen to recall big, bad Benzes of yore.

The new S450 is motivated by a 3.0-liter twin-turbo V6 producing 363 horsepower and 369 pound-feet of torque that can haul it to 60 mph in 5 seconds flat. The S560 throws back its nomenclature to the big-bore V8 era but shrinks its twin-turbocharged engine from 4.7 to 4.0 liters, which is good for 463 horsepower (a gain of 16 hp), and 516 pound-feet, yielding 60 mph in 4.5 clicks. Both models mate to nine-speed autos and are available with rear-wheel drive or a new 4Matic+ system, which, for the first time, can fully vary its front/rear torque distribution.

The new AMG S63 drops its V8 from 5.5 liters to 4.0 liters but gains twin scroll turbos that help add 26 horsepower for a total of 603, while retaining its (still stupendous) torque figure of 664 pound-feet. Together with the new 4Matic system and a nine-speed auto that swaps a torque converter for a wet startup clutch, the S63 is good for 0 to 60 mph in a supercar-like 3.4 seconds. The big daddy S65 remains mechanically unchanged, with its monstrous 6.0-liter twin-turbo V12 churning 621 horsepower and 738 pound-feet. Due to its rear-drive configuration and inherent tendency to vaporize rubber (not to mention that the only gearbox capable of handling all that twist is a seven-speed), the S65 manages 60 mph in a (still not-so-glacial) 4.2 seconds.

Look beyond the new engines and you'll find even snazzier stuff with the S-Class electronics. Taking yet another step closer to autonomous driving, the S-Class now uses route-based speed adaption to slow for corners, junctions, roundabouts or toll booths. An active steering system can change lanes following a driver-instigated turn signal, and the aforementioned active brake assist with cross-traffic function uses a long-range radar camera and stereoscopic camera to avoid potential collisions. 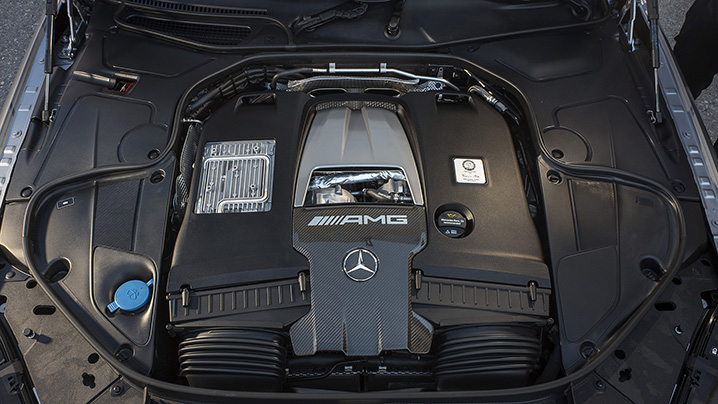 Settle into the S560's left-hand throne, and you're quickly reminded of why the S-Class is one of the most admired – and imitated – luxury cars on the planet. The seats are supportive without hitting any particular pressure point, and that's before you've even started the massage function. Ignore the silly new "Wellness" feature, which links climate control, seat, lighting, and five pre-set music programs with the intention of relaxing passengers; the real relaxation lies in the S-Class's eerily zen-like insulation from wind and road noise. Squeeze the throttle, and the S560 whisks ahead swiftly and smoothly. Select "Sport" mode, and the transmission gains a bit more sharpness, holding gears longer and downshifting more eagerly.

Because the engine's torque peak starts at a mere 2,000 rpm and carries all the way through 4,000 rpm, more aggressive driving modes are really only necessary if you're in a hurry and don't mind the disruption of the S-Class's impeccable smoothness. Though Comfort is a tad innocuous and Eco is a bit toothless, either mode satisfies under most driving conditions. The suspension is pliant and easygoing, with enough body control to encourage swift driving on b-roads. While the S560 is more biased toward all-day comfort rather than out-and-out carving, our tester was equipped with the so-called Curve Tilting option, first seen on the S-Class Coupe. The feature enables the car's air suspension dampers to lean into corners in order to reduce the perceived G-load on passengers; with up to 2.65 degrees of body lean, the S560 seems to corner completely flat, a sensation that might seem strange to those accustomed to the reassuring feel of slight body roll.

The AMG S63 adds a bit more driver involvement without departing far from the familiar S-Class paradigm of isolation and control. The 4.0-liter V8 makes the nearly 2.5-ton sedan feel positively lithe, and the transmission manages that power smoothly until switched into Sport or Sport+ modes, which add a bit more character and crispness to the otherwise quick shifts. Accelerating hard in this massive sedan is all but irresistible because of how improbable it feels to hustle this mass so swiftly. The feeling is further accentuated on the Autobahn, where the S63 pulls like a supercar and embarrasses sports cars by hovering at their bumpers in the fast lane until they finally move out of the way. I passed several already swift cars on an unrestricted section before I finally hit an open stretch where I was able to top out the Affalterbach beast at an indicated 264 kph (164 mph). Despite the speed, the S63 felt confident and composed. 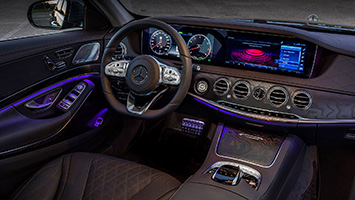 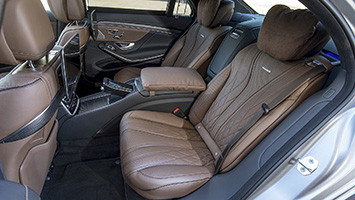 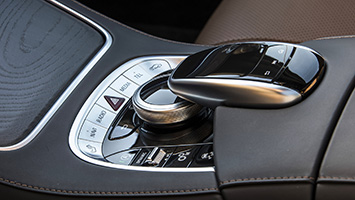 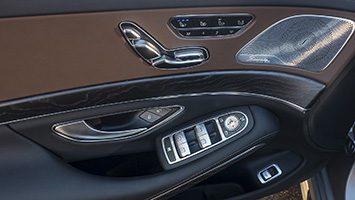 My day-long drive through the German countryside also offered ample opportunity to test the S560's semi-autonomous features. While they worked as advertised (and the safety systems are impressively effective), the lane-keeping assistance wasn't quite active enough to encourage complete abandon. Let go of the steering wheel, and the car stays within the lane for 15 seconds before a warning chime appears. You can get away with a full minute before the system lets the steering go slack, though you'll likely feel more comfortable taking the controls in even light twisties since the electronics don't always keep the car perfectly centered. The system's awareness of upcoming turns is impressive but not exactly groundbreaking (we've seen Audi take this on first), but Mercedes-Benz's execution is outstanding, offering seamless anticipation of upcoming turns.

Interestingly (and not surprisingly), the most intriguing S-Class engine I experienced won't be immediately available in the U.S.: the 3.0-liter inline six-cylinder. The engine runs a 48-volt electrical system that directly runs the starter, water pump, and air-conditioning compressor, thereby removing the need for power-sapping pulleys and belts. The system also uses an electric supercharger (what Mercedes calls a electric auxiliary compressor), which uses 48V juice to add boost before the conventional turbocharger is spooled up. The system is good for 10 to 15 percent gains in efficiency, while adding palpable benefits like a silky smooth auto stop/start system and virtually no lag. Stand by for this advanced powertrain to reach the U.S. market; though it will first become available in the S-Class, its performance and fuel-economy gains will likely lead it to trickle into other models. 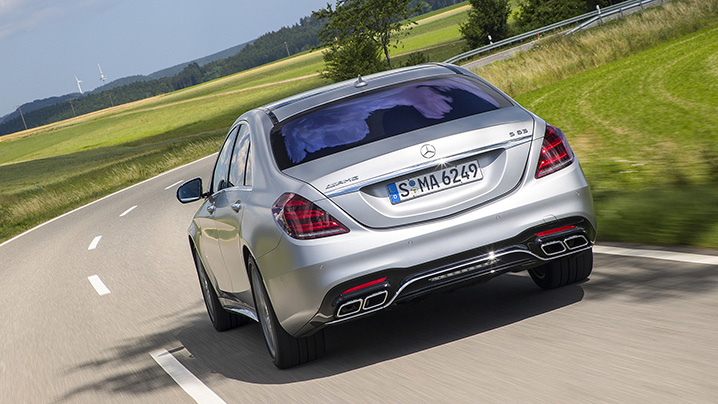 The S-Class is the leading edge of Mercedes-Benz's push toward autonomous driving, and thus the first to benefit from the brand's advances. While surrendering control to the computer is not yet mandatory – in fact, most of the S-Class's bells and whistles can be turned off – the more notable benefit comes in the form of accident avoidance features, which have the potential for saving lives.

Sure, the new S-Class engines offer more performance and greater efficiency, but luxury wars will no longer be won on those grounds alone. Rather, the battle for supremacy will claimed from a matrix of luxury features, cabin comfort, performance – and yes, computer-aided driving. Based on those factors alone, the 2018 Mercedes-Benz S-Class is more than ready for the future.