How Maranello's homely hypercar ended up in a reboot of a '70s Jigglevision series.

Brett Berk
The irregular series, The Car Stays in the Picture , covers the sometimes bizarre backstories of the real stars of movie favorites: the cars. In our last one, we covered the iconic Porsche 928 from Risky Business. This time, it's a homely hypercar's unusual footnote in history.

The inelegantly named, and inelegantly styled, Ferrari Enzo Ferrari was, a technological triumph when it was unveiled in 2002 at the Paris Motor Show. The successor to the equally, but distinctly, unlovely F50, it was Maranello's latest ultra-exclusive supercar. It had a price tag and spec sheet to match: 6-liter V12, 6-speed Formula One-inspired electrohydraulic transmission, 660 hp, $650,000.

It was also, at that fateful reveal in the City of Light, fresh off of a plane from Malibu, where it had just touched North American soil for the first time – or at least North American sand. It had been driven on a beach by a bikini-clad Demi Moore, in her star turn as a villain in the second filmic reboot of the 1970s Jigglevision TV show, Charlie's Angels, subtitled, appropriately enough Full Throttle.

All of which begs the automotive question we love to ask at The Car Stays in the Picture: How the hell did something like this ever happen?

"It was a combination between us having a very strong connection in Hollywood, and knowing the dealer, Giacomo Mattioli of Ferrari of Beverly Hills, that has always been quite prominent, used by a lot of movie directors," says Marco Mattiacci, the vice president of the Ferrari and Maserati brands in North America at the time. "But one of the things we were doing then was trying to find placements for Maserati. And we had to leverage that appeal of Ferrari."

The Enzo was thus something of a Trojan Prancing Horse, with the re-launch of Maserati USA hiding inside – a carrot leading not a stick, but a trident, or maybe some slightly less familiar vegetable, like broccoli rabe. 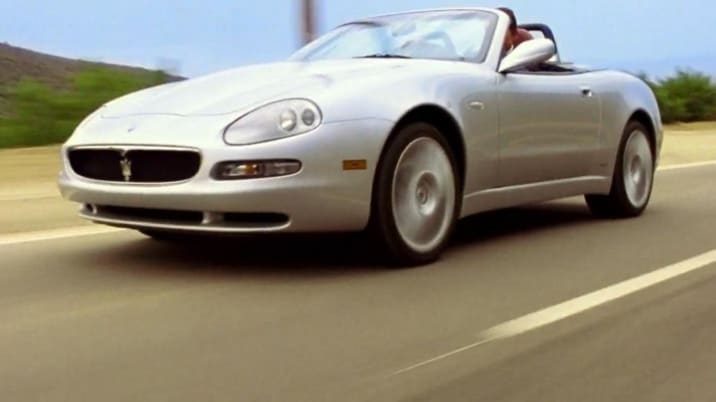 "In that movie, there was the Enzo. But there is also a 2002 Maserati Spyder. That was more of the key product placement. We had to place the Maserati," Mattiacci emphasizes. "So at that point, it was for me to go to the importer and convince Maranello to bring this car on set, because the only chance we had to position the Maserati was to give this premiere of the Ferrari Enzo."

Intrigue and deal making aside, how was this executed – a multi-stop tour for a top-secret production prototype that originated in Italy, jetted to California, and then returned to Europe in time for a reveal in France? Ferrari supercars are among the most desirable scoop in all of autodom, rivaled in the entertainment industry only by the insatiably misogynistic demand for catty gossip from the set of a female-driven hit franchise. Placing the two together on a public beach must have created a paparazzi feeding frenzy akin to a sharknado touching down in a tilapia farm.

"We had to guarantee the importer confidentiality so no photos could be shot of the car. The car was still was one of the demos, or pre-production cars. So we took all the kind of precautions to not have the car viewable," Mattiacci says, modestly. "We brought the car there during the night, the crew did an amazing job."

Complicating matters was the fact that the notoriously complex car – with its low stance, weird doors, funky transmission, and odd startup routine – had to opened, entered, and driven on the coast seamlessly, by a scantily clad, wet, barefoot, movie star. "I did get to drive it," Demi Moore says on one of the extra segments on the film's DVD. "And I had to pull out at the beach parking lot, without going over the speed bumps so I didn't tear out the bottom end of the car." A Ferrari factory technician was on site. A translator for the technician was also present. What could go wrong? Sadly for those of us who live on schadenfreude, nothing of note.

"Everything went smoothly. I think from that point of view we were surprised about that with the cars. But we were very careful. Especially with the Enzo, because we knew they would be taking it to launches and auto shows in the following months. Of course we knew it would be a gamble," Mattiacci says. "I mean the car was positioned on the beach, it was not on the sand. The car was in the parking lot. Demi Moore was coming out from the sea...." 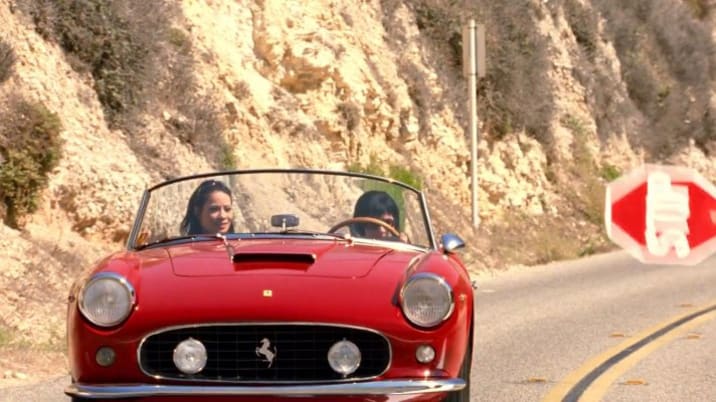 Interestingly enough, the Enzo was not even the most valuable Ferrari on the shoot. Two of the Angels, played by Cameron Diaz and Lucy Liu, shared wheel time in a 1962 250 GT California Spyder SWB, one of just 55 produced. (Originally grey, the car was painted red prior to its appearance in the movie, but has since been restored to its factory hue.) As it turns out, Ferrari helped facilitate the loan of it as well, to sweeten the deal.

"That was from a client, but I can't mention the name," Mattiacci says. "It's part of the Ferrari community and we're lucky to have that clientele."

Charlie's Angels: Full Throttle was the top box office draw during its opening weekend, and eventually raked in over $250 million worldwide. The series' appeal continues to this day, with a new Sony-produced reboot allegedly in the offing. That co-starring California Spyder was offered with a $7.5 million price tag in 2012, and seems to have entered a private collection. The film's hero car was memorialized by Hot Wheels in a limited edition, 1:18 scale, 5,000 unit, numbered die cast model – unopened examples now trade for around $200 on eBay if you're interested. And, according to vehicle valuation specialists at Hagerty Insurance, real Enzos have quadrupled in price since new, doubling over the past three years alone, from an average of nearly $1.3 million to over $2.5 million.

But what ever happened to the actual Enzo that Demi drove? "It went back to Ferrari," Mattiacci says. "It was a European version car. It probably went to a customer there. But we never marketed it as the Charlie's Angels car." 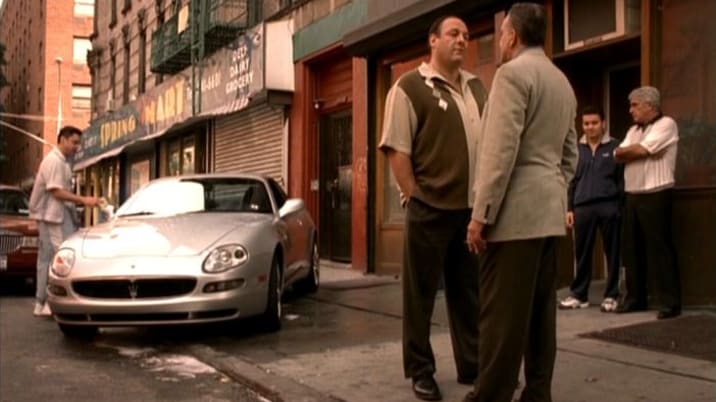 Cars aside, did the Trojan Prancing Horse play work? "As a matter of fact, in the following 18 months, we put Maseratis in The Sopranos and Entourage, so it started a strategy that increased awareness of the brand very quickly," Mattiacci says. "The use of the Ferrari as leverage, that was a key point when we started to build a community."

We still don't like the look of the Enzo – its front end reminds us too much of Pagliacci's sad and tragic party hat, and its rear too much like the front end of a Plymouth Prowler. And we haven't re-watched Charlie's Angels: Full Throttle since we saw it in the theater, but we would hazard to guess that it has held up just about as well as Demi Moore's cosmetic surgery. However, Maserati sales are up nearly 40 percent this year over last, so perhaps this strategy is finally paying dividends.