When the first-generation Subaru XV Crosstrek launched a few years ago, I was skeptical that more ground clearance and fender flares is all it would take to get more buyers. But sell it has. According to Subaru representatives, it's the company's third-best-selling line, and is second in the country for compact and subcompact crossover sales (first is the Jeep Renegade).

Most Crosstrek sales are in America - 60 percent of them. So if lifting an Impreza can yield such impressive sales results, it's no surprise that Subaru kept the formula the same for the new Crosstrek. The end product is served well by all the improvements to the new-generation Impreza, while equally hampered by its issues.

One of the few ways the Crosstrek is distinct from the Impreza is on the outside. Though the main body is the same, the front and rear bumpers are a little chunkier, and the front grille is different. It also features the tried-and-true addition of black plastic fender flares to signal its crossover and dirt road intentions. Every Crosstrek comes standard with roof rails and alloy wheels with a machined finish and black-painted accents. Those wheels are available in either 17- or 18-inch varieties. The body sits atop a raised suspension that brings ground clearance up to an impressive 8.7 inches over the Impreza's 5.1 inches. That also matches the Jeep Renegade Trailhawk for clearance. 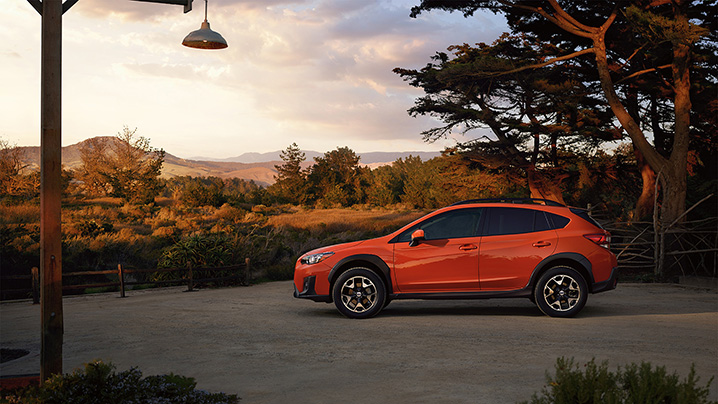 The Crosstrek's fresh bod is propelled by the same 2.0-liter flat-four as the Impreza, which, at 152 horsepower, makes four more ponies than the old engine. Torque remains the same at 145 pound-feet. The engine, which Subaru says is 80 percent new, is much less coarse and clattery than its predecessor, letting more of the pleasant boxer engine's rumbling noises through.

You'll likely hear those noises plenty, because you'll need to work the car hard to get anywhere. Just as we found in the Impreza, what power the engine makes is all high in the rev band. And even when you're in the meat of it, it still takes an agonizingly long time to get up to speed. There were a number of overtaking episodes on two-lane roads during the test drive, and each was a nerve-wracking experience. Even with the foot to the floor, the Crosstrek took the tortoise's approach to forward momentum, and I was constantly fearful of a hare coming up the other lane.

Brutally slow acceleration isn't particularly out of the ordinary in the subcompact and compact crossover class. The Toyota CH-R and Nissan Rogue Sport, among others, are just as slow, if not more so. Still, we wish the Crosstrek had more pep. If Subaru could just stick a small turbo on this engine and bring horsepower and torque closer to 200, all these complaints would go away. 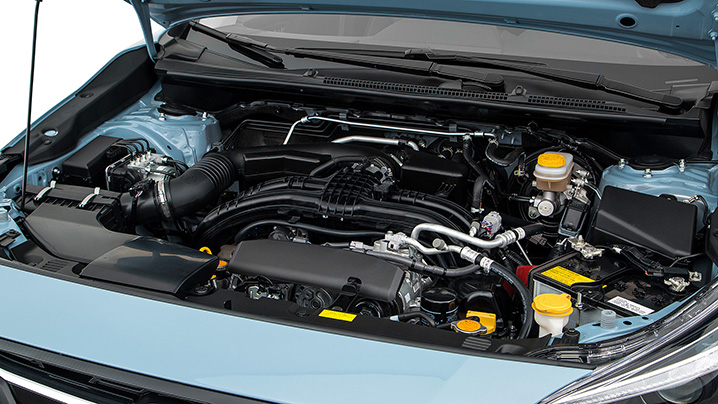 Besides being just as slow as the regular Impreza (or possibly slower, we're not sure exactly since Subaru didn't release 0-60 mph times for either model), the Crosstrek gets worse gas mileage than the low-riding version. With the new six-speed manual transmission, which is now available on both the base trim level and the Premium version, it gets 29 mpg on the highway and 23 mpg in the city. The CVT, available on every trim level, improves to 33 mpg highway and 27 in the city. But the Impreza, with just a five-manual, manages as much as 32 on the highway and 24 in the city. The CVT-equipped Impreza will do up to 38/28.

The good news is that when you're not going foot to the floor or for ultimate fuel economy, the Crosstrek is a good driver. Inside, wind noise is nearly nonexistent, and only on particularly rough concrete or dirt roads would we hear any commotion from below. The ride quality is very good, muting most small bumps, and reducing big ones to minor hiccups in the cabin. The drawback is a hint of floatiness and some noticeable body roll.

The Crosstrek trades its old 16: 1 steering ratio for the new Impreza's 13:1 rack. That allows the Crosstrek to change direction with little input from the helm, and the car turns in quickly with plenty of grip. It's a shame the steering wheel is completely numb and the weight feels a bit too light and artificial. All Crosstreks now also feature torque vectoring on the front wheels, which works by applying some braking force to the inside wheel to send power to the outside, which undoubtedly helps, too. 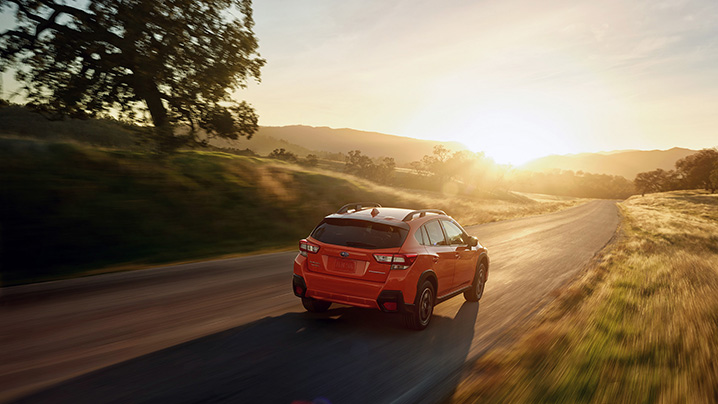 The added ground clearance also makes it easy to tackle rough service roads and trails to campsites. It's complemented by Subaru's "X-Mode," a feature that's only available on CVT-equipped Crosstreks. It works at speeds under 25 mph and softens throttle response and adjusts how the traction and stability control work to improve traction over slippery and rough surfaces. The reduced throttle sensitivity was very noticeable, and if nothing else, it did help keep from getting overexcited and blasting over large rocks and ruts.

More impressive than the throttle and traction tweaks was the hill descent control that activates with X-Mode. We had the opportunity to try it on a gravel hill at a rock quarry. After climbing up the massive mound of rock chunks, we descended what Subaru said was a 20 percent grade. That may not sound like much, but from the driver's seat facing down, it's pretty darn steep, and the hill descent control was never once fazed by it. It lowered us down the hill slowly and safely. The Crosstrek, since it's a car at heart, won't ever be as capable off-road as a real SUV with a low-range transfer case, but it can do a lot more than you might expect.

The excellent visibility shared with the new Impreza makes it even easier to place the Crosstrek. Pillars are slim, and the front seats are up high. The passenger seat, which isn't adjustable for height, is almost too high. In the sunroof-equipped models, this editor was scraping the ceiling. The driver won't have this issue, though, as both the driver's seat and steering wheel have a wide range of adjustments for height and reach, making it easy to find a comfortable position. It's unfortunate that the Crosstrek's seats are so flat and unsupportive. They have a decent amount of cushion, but without the support, we could see them getting a tad uncomfortable on a long trip. The back seats don't excel in support either, but they do have plenty of head and leg room, the latter of which was improved by the slightly longer wheelbase shared by the Crosstrek and Impreza. 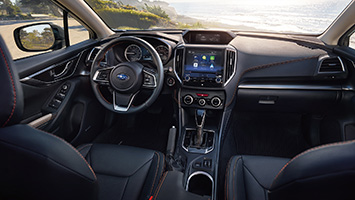 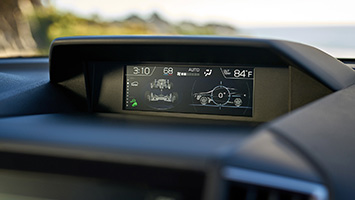 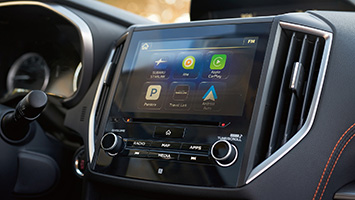 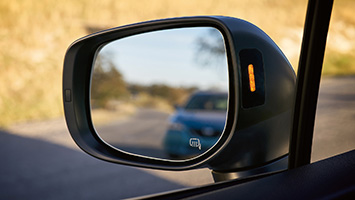 The interior styling is once again identical to the Impreza in nearly every way. The only significant differences are in upholstery and details such as orange stitching on some models. This isn't a bad thing, since the dashboard is much more sculpted and modern than the dated design of the previous model. However, it retains most of the simplicity of the old car. The climate control is always adjustable via big simple knobs and buttons. Large shortcut buttons on the center stack allow you to easily jump to parts of the infotainment system you use frequently, and there are knobs for the volume and tuning.

The touchscreen interface is similar to Apple CarPlay and Android Auto, both of which are included, in that it uses large icons and pages to organize functions and apps. Subaru also offers apps to download for the Subaru system including Yelp!, Magellan navigation, and – we're not making this up – a birdwatching app. The infotainment can also be hooked up to an optional Harmon/Kardon sound system, but only the serious audiophiles should consider it. The Premium and Limited's standard six-speaker system works surprisingly well, and even has good bass. Subaru didn't have a base model with a four-speaker version on hand to test.

Subaru naturally offers its EyeSight safety system on the Crosstrek, too. With it comes lane-keeping assist, automatic emergency braking, adaptive cruise control. Subaru even offers reverse automatic emergency braking, so if something is behind you as you're backing up and you don't see it, the car will stop itself to prevent a collision. Both of these safety features are optional, though, and only available on higher trims. EyeSight is only offered on Premium and Limited, while reverse automatic braking is only available on Limited. 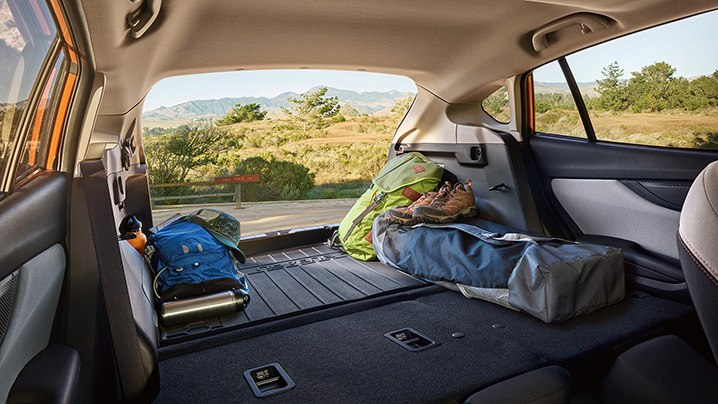 Cargo space is also the same as the Impreza hatchback. There's 20.8 cubic feet available behind the rear seats and 55.3 with the seats folded. That puts it ahead of many sub-compact crossovers such as the Jeep Renegade, Mazda CX-3, Chevrolet Trax, and Toyota C-HR, but still behind Nissan Rogue Sport and Honda HR-V, as well as virtually every single crossover from the slightly larger compact class.

As far as pricing goes, the Crosstrek is bang on with the subcompact set. The manual transmission model starts at $22,710, which is, give or take a few hundred dollars, the same price as entry level all-wheel-drive versions of the Honda HR-V, Mazda CX-3, and about $1,000 less than the Nissan Rogue Sport. It's also less than the Toyota CH-R, which isn't available with all-wheel drive in any trim level. Of course, if you don't need all-wheel drive, you could save some money by opting for one of the front-wheel-drive versions of the above crossovers. 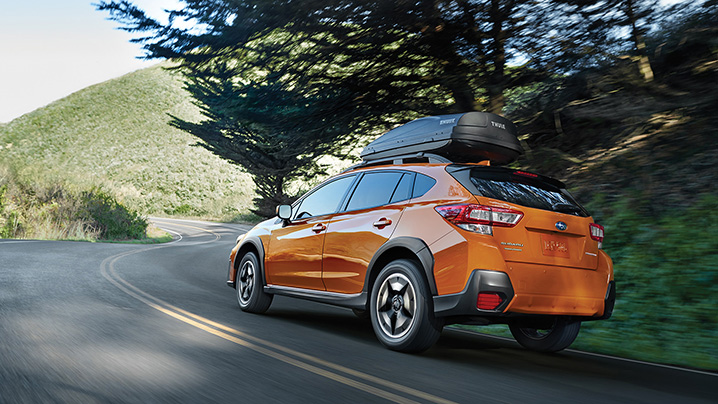 Moving up to Premium costs just $800 more, and it nets heated seats and the six-speaker sound system, along with the ability to add EyeSight. The Limited is on the pricey side at $27,210. And the only major upgrades are standard blind-spot monitoring, CVT shift paddles on the steering wheel, a larger infotainment screen, and some trim upgrades. We would probably skip this model. Especially since at $27,000, larger compact crossovers become much more alluring thanks to more space, and often more power.

Overall, the Subaru Crosstrek is a solid little car that lives and dies by its Impreza base. The weak powertrain really brings it down, but it still has the Impreza's usable space and maneuverability with a dash of crossover flair and comfort. Add in its dirt-trail capability, and it becomes a great option for someone looking for a small, practical car that won't quit when the going gets (a little) rough, or even for someone who just wants the look of a car like that. Because of that, we expect Subaru will sell plenty more Crosstreks in the next few years.