View All Specs
The phrase "all new" gets bandied about way more than it should in the automotive world. Depending on how lenient an automaker's marketing department is feeling at the time, refreshed fascias and a reshuffling of trim levels might earn a tired vehicle the all-new appellation. That's not what Subaru has done with its reborn Impreza compact. Everything from its wheels to its windows has been completely redesigned for 2017.

With one glaring exception, the 2017 Subaru Impreza has benefited immensely from its rebirth. The chassis is stiffer, the steering is better, and the interior is larger than before. Like on most Subarus, standard all-wheel drive remains a key selling point. The only thing that's missing is more power.

Subaru has gotten guff over the years for its exterior design, with vehicles being called everything from ugly (Baja) to odd ( B9 Tribeca). The 2017 Impreza doesn't fit those descriptions. There's just enough surfacing pressed into its bodysides to attract the eye, and the burly flared-shoulder fenders add a muscular stance. Dead-on, the Impreza's face is a bit too nondescript – if it didn't wear a Subaru badge, you'd be forgiven for mistaking it for a Honda or Toyota – but it's not unattractive. The bug eyes of Imprezas past are now nothing more than a historical footnote. 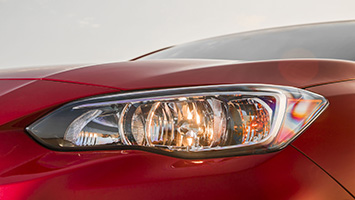 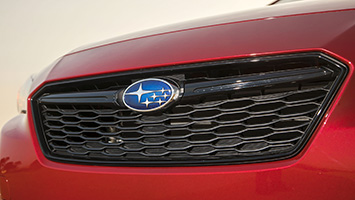 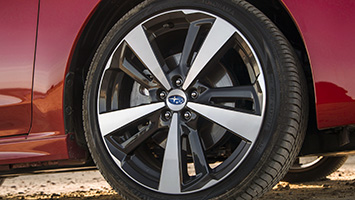 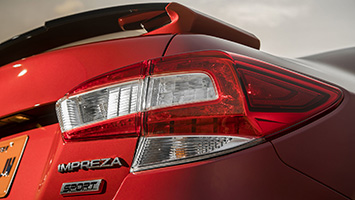 The Impreza is again available as either a sedan or, for $500 more, a hatchback. The trunk of the sedan measures 12.3 cubic feet. Obviously, the hatch offers more utility than the sedan, with 20.8 cubic feet of space behind the rear seats and a maximum of 55.3 cubes with the seats folded. That's more than the VW Golf's 52.7 and way more than the new Honda Civic hatchback's maximum of 46.2.

The first thing we noticed from the driver's seat is how easy it is to see out of the 2017 Impreza. Visibility is excellent in every direction, and all that glass means the cabin feels light and airy. Large, easy-to-read speedometer and tachometer gauges sit front and center, but the rest of the information needed for the task of driving is spread across three different LCD screens. The first sits between the two gauges, and the second is atop the center stack. The third screen is the largest, measuring 6.5 inches on base 2.0i models and 8.0 inches in Sport and Limited trims. Check out the Short Cut video below to see these three screens in action, and stick around for a look at the interior roominess, the hatchback's rear cargo area, and a walkthrough of the differences that define each trim level.

Subaru's latest touchscreen infotainment system comes standard with Apple CarPlay and Android Auto, which is great. There's a spot below the screen with a tiny Near Field Communications icon that allows NFC-enabled smartphones to pair easily with the car's electronic brain. We tried it with both an iPhone and a phone running Android, and it worked as expected. While Subaru still isn't at the tippy top of infotainment technology, the system in the 2017 Impreza is the best we've seen from the company. We like the large, clear icons on the home screen, and we're happy to report that the system felt snappy and responsive. Subaru gets a round of applause for including physical buttons and dials for the audio and climate controls.

The 2017 Impreza marks the debut of the Subaru Global Platform, which will underpin pretty much everything the automaker builds for the foreseeable future. While the new Impreza is larger in every dimension than the version it replaces, it hasn't grown out of its segment. At 105.1 inches, the Impreza's wheelbase is longer than the Volkswagen Golf's, but an inch shorter than the Honda Civic's and Mazda3's. Total length is 175.6 inches, which is exactly equal to the Mazda's. Width and height similarly measure up with its peers. Headroom, shoulder room, and legroom are all at or near the top of the Impreza's class.

In the case of the 2017 Impreza, bigger doesn't mean less nimble. Despite stiffening the chassis and the size increase, the curb weight of 3,034 pounds is about the same as before. The car's center of gravity is five millimeters lower than the last Impreza's, and that pays dividends on the road with a firm but comfortable ride and confident handling. Braking performance is another strong point, with solid pedal feel and plenty of reserve power in normal driving scenarios. 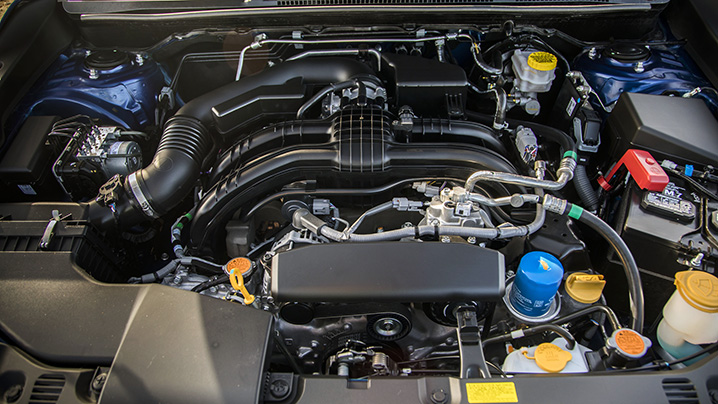 The 2017 Impreza's 13:1 steering ratio is much quicker than the last model's 16:1 rack. Even if the number doesn't mean anything to you, know that the Impreza's steering gear now has the same ratio as the BRZ sports car's. You won't confuse the Impreza for a sport coupe or hot hatch, but it feels light on its tires and is one of the best-handling vehicles in its class.

Unfortunately, the 2017 Impreza is let down by its powertrain. The engine is of course a horizontally opposed "boxer" four-cylinder, and it displaces 2.0 liters just like before – in fact, it's a mildly revised version of the previous Impreza engine. Stated horsepower is 152 at 6,000 rpm, which isn't a lot and feels like less, although it's four more than the 2016 model had. Torque measures out to 148 pound-feet, and it peaks at 4,000 rpm. The engine makes its power high in the rev range, and the CVT does its best to get the mill spinning at or near its peak without going straight to redline and generating a ton of ear-piercing whine, but there's just not much forward gumption to be found. An optional upgraded engine would shore the Impreza up with its main competition.

We drove the new Honda Civic hatchback recently, and there's no contest in acceleration between the two – Honda's 1.5-liter turbo engine is rated at 180 hp, but it feels more than 30 hp stronger than the Subaru. VW puts a 1.8-liter turbo in the Golf with 170 hp and 199 lb-ft. Mazda sticks with naturally aspirated engines, but offers a larger 2.5-liter option with 184 ponies and 185 lb-ft. The Chevy Cruze, Kia Forte, and Hyundai Elantra all have options for more power than the Impreza. The base 2.0-liter in the Ford Focus is about on par, but it shares the showroom floor with the $25,000 Focus ST, which has a lot more power. Only the anemic Toyota Corolla (137 hp and 126 lb-ft) has notably lower output than this Subaru. Of course, this Impreza will be followed by hotter WRX and WRX STI versions, and it's only a matter of time before those are unveiled and go on sale. But for now, if you want a 2017 Impreza you're stuck with the naturally aspirated 2.0-liter.

EPA fuel economy maxes out at 28 miles per gallon in the city and 38 on the highway for the CVT-equipped sedan, but trim levels and the five-door body shape can bring both figures down an mpg or two. 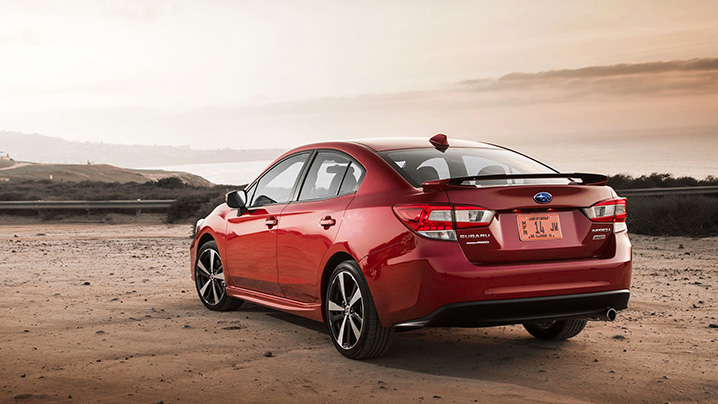 Subaru offers four trim levels for the 2017 Impreza, starting with the 2.0i at $19,215 with a five-speed manual. (Yes, a five-speed manual. In 2017.) The continuously variable automatic transmission adds $1,000. A step up the Impreza ladder brings you to the $22,015 Premium, which gets the CVT standard, plus better suspension dampers, alloy wheels, and some additional chrome bits. For a reasonable $1,395 more, buyers can add Subaru's EyeSight driver-assist package, which includes adaptive cruise control, pre-collision braking, and lane-keep assist made possible by a camera system, and comes bundled with blind-spot monitoring, and reverse automatic braking. At the top of the Impreza food chain sits the Limited, which starts at $25,415. Throw every option at the Limited and you'll still end up a few hundred bucks shy of $30k.

The $23,315 Impreza Sport, which offers Active Torque Vectoring technology, 18-inch wheels, black exterior accents and different interior trim, is the model aimed at enthusiasts. Of course, no amount of red stitching or faux carbon-fiber trim can make up for the car's lack of power, but the 2017 Impreza Sport's excellent driving dynamics and standard all-wheel drive will be enough for a lot of potential buyers.

Since the company says its Global Platform can accommodate plug-in hybrid and fully electric drivetrains, we think there's plenty of reason to be excited about the brand's future. And with a chassis this good as a starting point, we're interested to see what else is in store for Subaru's compact vehicle lineup. Bring on the WRX! 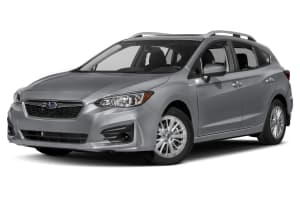