Will the Accord, Camry and other new sedans further increase Detroit's reliance on SUVs and pickups?

DETROIT - Honda on Friday revealed its newest-generation Accord, one of four re-engineered midsize sedans that Asian automakers are betting on to win market share as Detroit automakers shift focus to SUVs, crossovers, and pickup trucks.

Honda declined to discuss details ahead of Friday's event in Detroit.

The Accord and Camry are pillars of their manufacturers' US businesses, each selling well over 300,000 vehicles a year. In the coming months, Nissan is expected to launch a new Altima midsize sedan, and Hyundai will launch a new Sonata. Both are popular marques that will be promoted heavily.

"There has been no new news on the midsize sedan side for three years, and we think this is a great opportunity to bring attention back to the segment," said Jack Hollis, Toyota's head of marketing for North America. 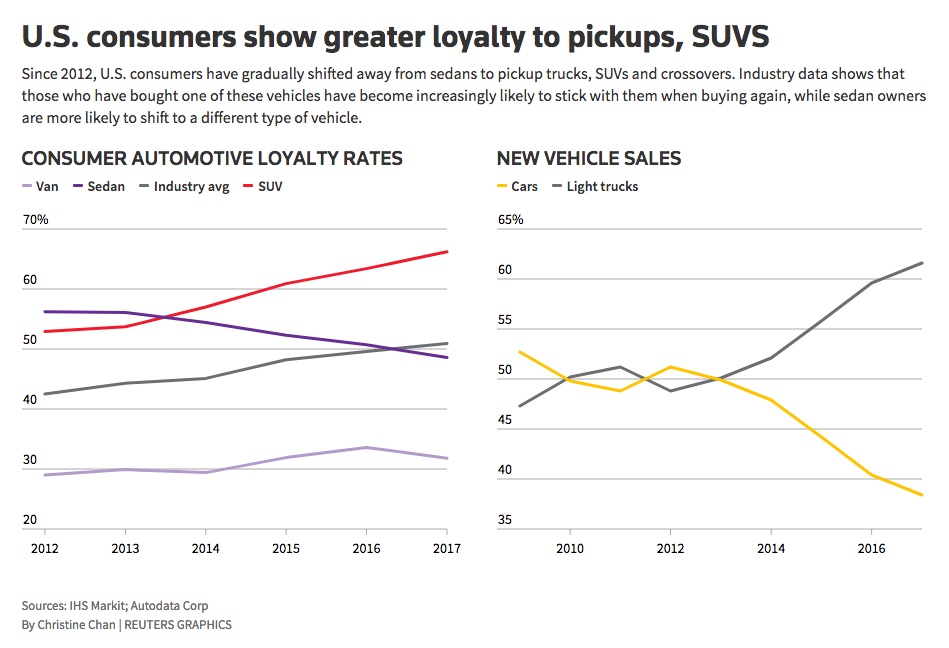 Year to date, US passenger car sales are down 11.4 percent, and sales of midsize sedans are down 14.2 percent. Still, Americans bought 7.1 million sedans in 2016. With General Motors and Ford cutting sedan production, and Fiat Chrysler Automobiles abandoning the segment, Honda and its Asian rivals could boost sales with updated models, dealers said.

"They could take share from other brands, which is traditionally what happens when a new product is launched," said Pete DeLongchamps, vice president for manufacturer relations at Group 1 Automotive Inc, the third-largest US auto dealer group.

"NOT FINDING A PLACE WITH CONSUMERS"

The Accord for years was Honda's top-selling model in the United States. Within the past year, US sales of the Honda CR-V have eclipsed the aging Accord, and Honda has expanded production capacity for the compact crossover.

Passenger-car sales have steadily declined since 2012, when they made up 51.2 percent of the US market. Sedans have sagged to a 38.1 percent share in the first half of this year. IHS Markit said US consumer loyalty to SUVs and pickup trucks has risen since 2012, but declined for sedans.

The new Accord and Camry "may stem the decline," said IHS Markit's Tom Libby. "I don't think they will cause a marked reverse."

Improvements to the Accord should boost sales at Galpin Honda in San Fernando, California, general manager Ed Hartoonian said. The dealership sells about 500 Accords and Civics, combined, per month, and Accord sales are up nearly 13 percent so far this year, he said.

"As a dealer we can't ask for much more."