Lighter Is Better, And The V6 Is A Demon

Greg Migliore
View All Specs
The Autoblog gang was downright stoked to learn the 2016 Chevy Camaro was next on our test-car docket. Then we found out it was the V6 model. Buzzkill. We were hoping for the snorting V8, or at least the spunky new turbo four-cylinder. The V6? Meh.

We've been driving V6 Camaros for, like, six years. It's what you buy if you can't afford anything better, or so say horsepower snobs as they wrinkle their noses and cut their coffee with 93 octane. But after a week with the six-pot Camaro, we'll admit it: we were wrong.

The all-new 3.6-liter V6 is strong, sounds good, and is damn fun to drive. Its 335 horsepower and 284 pound-feet of torque appear modest by modern standards, but they power the Camaro to 60 miles per hour in 5.1 seconds with the automatic, or in the case of our manual-equipped test car, 5.2 seconds. That's almost half a second quicker than the new turbo four-cylinder model.

Yes, it has the same displacement as the old V6. No, it's not the same engine.

Upon closer inspection, the V6's potency shouldn't come as a surprise. This engine is from General Motors' newest family of dual-overhead cam powerplants that launched in the Cadillac CTS and ATS. Yes, it has the same displacement as the old V6. No, it's not the same engine. Don't be fooled, and don't underestimate it at stoplights.

The strapping V6 is unsuspectingly good, but it's just one of many improvements for the sixth-generation Camaro. Chevy's coupe is lighter, faster, and more modern looking inside and out. It starts with a rear-wheel-drive chassis donated from the Cadillac ATS, though about 70 percent of the components are unique to the Camaro. The 2016 model is about two inches shorter in length (thanks to a shorter wheelbase) and about an inch has been removed from height and width compared to the 2015 model. These lighter underpinnings jumpstarted the Camaro's weight-loss plan, and thanks to extensive use of aluminum, the V6 with the new eight-speed automatic transmission weighs 3,435 pounds – 294 less than its predecessor (the manual-transmission V6 Camaro weighs 3,448 pounds). The V8, meanwhile, sheds 223 pounds.

One by one, these elements would merely enhance how the Camaro drives, but taken collectively, they invigorate the new model. It feels much more confident and agile in all circumstances. Put simply, it's a sportier car.

Grab second, let the revs build, and the dual-mode exhaust changes its tune from a low buzz to a rumble, then a growl.

With that in mind, we set out on a fall Friday morning to explore downtown Detroit. Everyone is at work, and the streets are largely empty as we blast down Interstate 75. Our first stop is Belle Isle, a picturesque island in the Detroit River along the Canadian border. It's an idyllic setting to get a feel for the Camaro at modest speeds. The car is an excellent boulevard cruiser. Grab second, let the revs build, and the dual-mode exhaust changes its tune from a low buzz to a rumble, then a growl. We want more. Leaving the island we hang a left onto Jefferson Avenue, a route that takes us by General Motors world headquarters. Forging ahead, we enter a tunnel and merge onto the Lodge, one of the oldest expressways in Michigan, where the exhaust note reverberates off the ancient walls.

We get used to that sound, and driving the Camaro becomes addicting. Time to head home after a hard day at the office. Let's take the long way, with curves. Someone needs to get the Thai food? On it. Stick it in Touring mode and the engine will happily spin along around 2,000 rpm at 70 mph. This coupe is comfortable, even semi-quiet for the segment. Chevy cut a lot of weight, but didn't skimp on the insulation. The cabin is neither harsh nor abrasive. We put down the windows, let the 50-something degree air in, and urge this big Chevy forward.

We were happy to run around town in the Camaro, but we we actually had a better feel for the car's limits earlier this year, when we tested a V6 prototype on Belle Isle – when it was set up for the Detroit Grand Prix. The Camaro's lighter weight and improved reflexes sparkled as we went hard into the track's tight corners and aggressively accelerated out of the pits. There, the V6 provided plenty of juice, and the engine was a force on the brief straightaways. During this test, we also tried a V6 equipped with the new eight-speed automatic, which is a dramatic improvement over the outgoing six-speed auto. 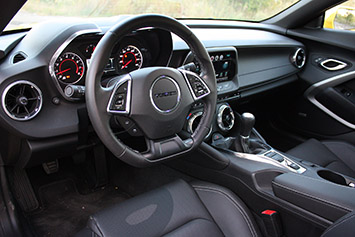 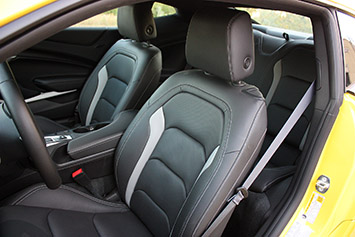 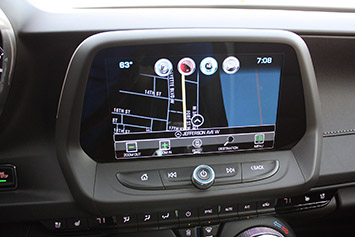 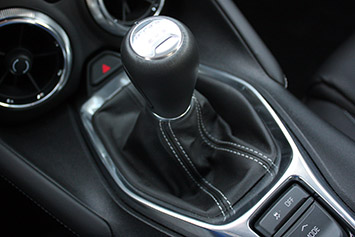 Overall, the Camaro has a much nicer interior, but there are still some areas that could be improved.

Both of our stints lead us to conclude that the new Camaro is easier to drive well. The old car was happy to slide its tail out during turns – whether you wanted it to or not – but the new one is more poised. The quick ratio electric power steering system is way more connected, something Chevy engineers sought with the double-pivot design of the MacPherson front suspension. We notice the steering weight on highway curves, though it's lighter at slower speeds. The dynamics can be tailored with a driving mode selector mounted in the center console, a new feature for '16.

It's one of several significant upgrades to the cabin. The materials look and feel better. There's cool new technology, like available high-definition color displays and a sophisticated ambient lighting system, yet it retains the layout and charm of a true American muscle car. Sitting in the driver's seat, things like the four big vents immediately grab our attention. Two bookend the long dashboard, and two more, set in the middle, can modulate temperature and fan speed by twisting the vent housings. It's a really neat feature (see how it works in the Short Cut video below). There's a flat-bottomed steering wheel that feels good in our hands, and it reinforces the car's freshly sharpened steering dynamics. We also like the leather panel dressed up with some stitching that runs across the top of the glove box. Overall, it's a much nicer interior, but there are still some areas that could be improved. The angled door panels create the feel of a cockpit, though the plastic feels cheap. On our tester, the door latches had noticeable gaps between the pulling mechanism and the rest of the assembly. Some consumers might not notice or care about these minor warts, but they caught our attention.

Yes, it looks about the same as the old car, and the interior still has some foibles. But take our word for it, the 2016 Camaro is demonstrably better.

Our Camaro is a 2LT model that costs $35,065 with options. It has a black interior, which is always a tasteful way to spec-out a car. It's sporty yet understated. The bright yellow exterior color could also be construed in an athletic sense, but it's anything but subtle. It almost overshadows the design changes, which are evolutionary. Eyeballing this thing at the curb, there's no doubt it's a Camaro – but it might take you a second to realize it's the sixth generation. Look again, though, and the changes are more evident. The hood looks a little curvier, the roofline is raked to create more of a fastback silhouette, and the head and taillights have new designs. Only two pieces, the rear Bow Tie emblem and the SS badge are actually carryover, and designers underscored the Camaro's weight loss with sheetmetal that looks tauter and more confident.

That neatly sums up the improved 2016 Camaro, which goes on sale later this year. It's leaner, meaner, and true to its heritage as Chevy's emphatic response to the Ford Mustang. Yes, this new car looks about the same as the old one, and the interior still has some foibles. But take our word for it, the Camaro is demonstrably better – quite literally from its now-lighter core. Don't be fooled by its familiar looks, and definitely, do not overlook the V6 model. We're glad we didn't.