Disclaimer: We were limited to a short 10-minute drive at Hyundai's research and development facility in Namyang, about a 90-minute drive from the South Korean Capital of Seoul. The closed loop didn't provide much in the way of road variation, and we reached a blistering top speed of 45 mph with all of three opportunities to use the brakes.

The Kona we drove was a Korean-spec model. Suspension and steering tuning will be adjusted for the US, though we couldn't get a clear answer on what sort of changes that entails. Expect the US model to be a bit softer than what the Koreans and the Europeans will see, though we'll have to wait until a full first drive to be sure.

Hyundai has been on a roll lately, releasing a series of solid if not exactly groundbreaking products, though until now they company was missing an entry into the ever-burgeoning B-segment crossover. For several years, compacts like the Honda HR-V and Mazda CX-3 have ruled the class, but Hyundai is going all-in on crossovers, with several new models on the horizon. The first one out of the gate is the Kona. In the next few years, we'll see a model that slots below the Kona and a large SUV that will sit above the Santa Fe.

We got our first look at the new model at Hyundai's new Motorstudio, a place that's half interactive museum and half high-end conference space.

The Kona's styling, a mix of original and derivative design elements, is sure to be divisive. The most standout feature is the plastic cladding that comes in either black or grey, depending on the body color. Hyundai is calling it armor. We just hope it's affordable to replace. 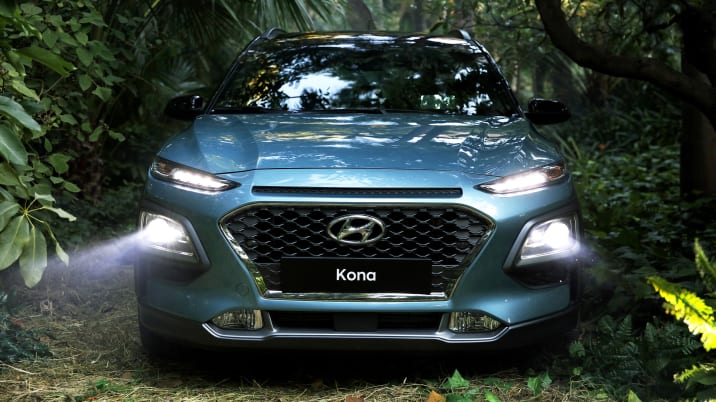 The front wears Hyundai's cascading grille, an element that's making it's way across the automaker's lineup. It's flanked by what Hyundai is calling is calling composite headlights. It's a split design that places the slit-like turn signals above and separate from the actual headlights. It looks very similar to the current Jeep Cherokee, odd considering the controversy that model caused a few years ago. There's also a bit of Nissan Juke in there, though substantially toned down.

You best get used to it, though, as design chief Luc Donckerwolke says it's the new face of the brand. Expect to see some variation making its way across the automaker's lineup. Not so with the rest of the Kona, as Donckerwolke said each model will get unique elements only found on that particular car. For the Kona, it's the armor.

Other exterior design cues include the floating roof with a Land Rover-esque D-pillar and the two-tone paint scheme that adds a black roof to certain body colors. Like the cladding, there's no mixing and matching the body and roof colors. There's also a wide slot just above the grille that doesn't lead anywhere. It resembles the hood scoop on the fifth-generation Chevrolet Camaro SS. It's another design flourish that seems out of place, especially since it isn't functional.

In sharp contrast to the busy highly-styled exterior, the Kona's interior is typical Hyundai: handsome, conservative, and well positioned. It's very similar to the new Elantra GT, with a large infotainment display that floats on top of the dash. It's a similar design to those in Mazda, BMW, and Audi products. Donckerwolke says the placement makes the dash appear lighter and lower. With displays getting bigger, having them sit in the dash forces the vents, controls, and storage areas down and out. 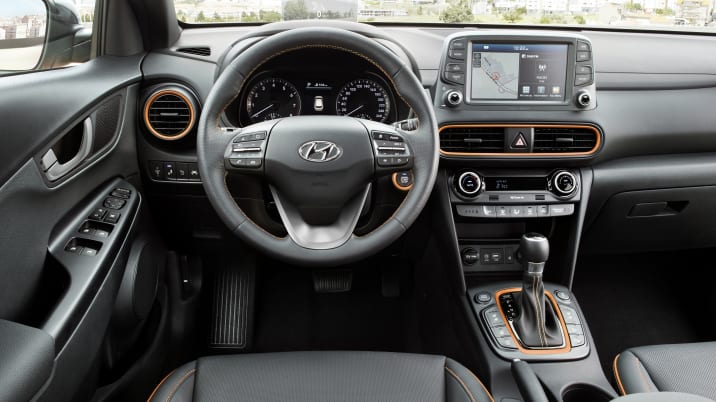 In our short time in the car, all of the materials felt nice to the touch. It isn't luxury-car soft, but nothing felt cheap either. All of the controls were well placed, with dedicated buttons and knobs for HVAC, radio, lighting, active safety, and more. Everything felt natural, and there was no hunting for various functions. There's even a dedicated button to engage the all-wheel drive system. The standard mode waits for a loss of traction before sending power to the rear. We didn't get much of a chance to play with everything, but it looks and feels fine at first glance.

It definitely looks and feels better than something like the new Toyota C-HR, which was black over black over black. The buttons and knobs all feel like Toyota went for the least expensive option. In our very, very short loop, the Kona drove better than the C-HR, too.

From the moment you start moving, the Kona impresses. The steering is weighted really well in its standard drive mode and provides a surprising amount of feedback - far more than one would expect from a crossover. Our short time in the car didn't allow us to try any of the other drive modes to see if there is a change to the steering force. The leather-wrapped wheel feels great in your hands. In our brief experience, the steering feels as good as any competitor. We'll have to wait for more seat time in a US model to make a final call.

Likewise, the suspension displayed a surprising amount of poise, soaking up bumps and handling the intentionally upsetting pavement at Hyundai's facility with grace. Secondary motions were minimal, taking every hit with little drama. We can only hope that the US-spec models will feature tuning similar to those in Korea. Our old long-term Honda HR-V and Fiat 500X weren't set up for traversing Michigan pavement. We'll be interested to see if Hyundai will be any better. 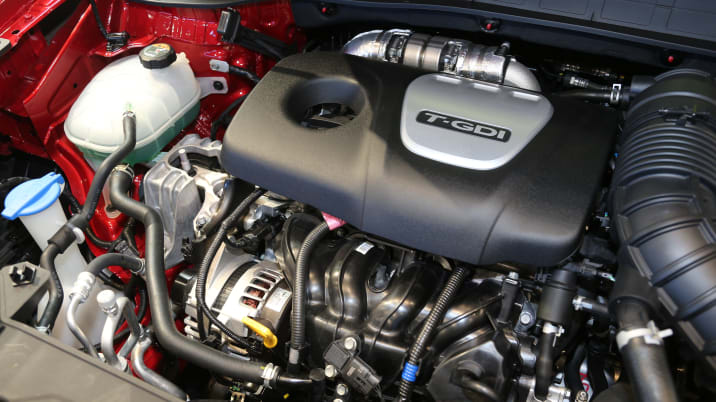 At low speeds, it exhibits the same sort of hesitation as other Hyundai and Kia products with the same powertrain. It's not great, with power taking a moment to kick in while the clutch engages. Once it does, the Kona gets up and goes. Hyundai reports a 0-62 mph time of 7.7 seconds, genuinely quick and better than the Fiat 500X, Honda HR-V, Mazda CX-3, and Toyota C-HR. At speed, the car responds to throttle inputs with minimal turbo lag.

The biggest complaint we have from behind the wheel is the noise level. At idle, the car is relatively quiet. Once you get moving, there's a notable amount of wind noise, especially coming from the mirrors. It's not blaring, but it's not as good as some of the competition.

We'll reserve judgment until we can get some real seat time in the Kona. We had no opportunity to test things like active safety with the heads-up display, cargo space, or back-seat room. There simply wasn't the opportunity. As it stands, the Kona seems to have a lot of potential to be a class leader. Just hope that Hyundai doesn't change it too much for us Americans.