Road trip: A Chevy Bolt's journey to the far reaches of its range

Or, a road trip to Indiana tests the Bolt's real-world travel chops.

Joel Stocksdale
Electric cars are steadily reaching the point where they could be a true replacement for an internal combustion car, and few exemplify this potential more than the Chevy Bolt EV. Its 238-mile estimated range means that you'll probably never worry about range on trips in-town or to the next town over, and its price tag of around $30,000 with a tax credit makes it attainable for a lot of people. But to really be a replacement for a gasoline-powered car, an EV needs to be able to handle long-distance trips, too. To determine the Bolt EV's long-distance capabilities, I took our short-term Bolt EV on a 540-mile round trip. I made it, but it wasn't trivial.

The weekend road trip I embarked on was one I do frequently: a journey from the office in Birmingham, Mich., to my house in Warren to pick up my dog, and then on to my parents' home in Richmond, Ind. This is a roughly 270-mile trip one-way, which sharp readers will note is greater than the estimated range of the Bolt on a full charge. So this meant I would need to find a place I could charge up to complete the drive. Along the route, there were plenty of chargers, but not all are created equal.

You see, there are three basic levels of electric charger the Chevrolet Bolt EV can use. The first, called Level 1, is your run-of-the-mill 120-volt wall outlet. This is borderline useless, and exists primarily for emergencies. According to Chevrolet's website, it will only provide about four miles of range per hour of charging. The second type, aptly named Level 2, is a 240-volt charger. This will provide about 25 miles of charge per hour, and we have one at our office. Chevrolet or a third party will also sell you one of these chargers for your home.

The third and final charger is the one I was looking for, the DC fast charger. These can add up to 90 miles of range in 30 minutes, according to Chevrolet. That was exactly what I needed to do the trip in one evening. As I looked at the Chevy Bolt EV owners' page, which shows where charging stations are, and what level they are, I discovered that DC fast chargers are very few and far between at the moment. 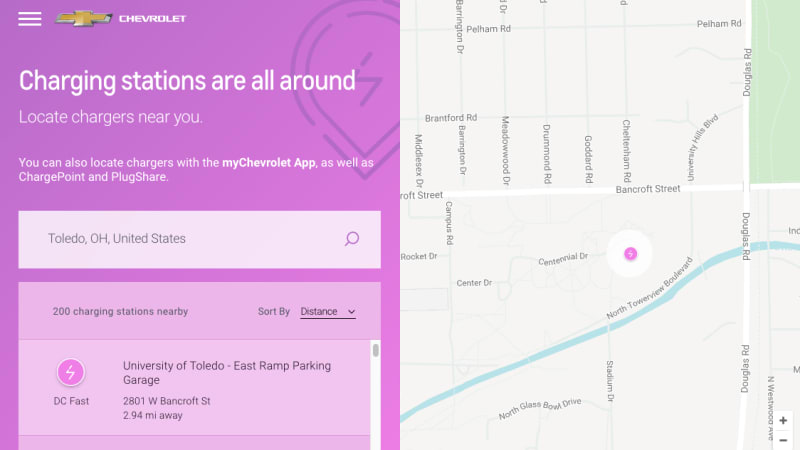 Had I been driving a Tesla, I would have had more options, since looking them up on the Tesla site revealed three Supercharger locations between Detroit and Dayton, Ohio. Unfortunately, only Teslas are able to use those chargers. When looking for a general-purpose DC fast charger, only one showed up on the map between the Detroit area and my parents' house. Thankfully it was located in Toledo, Ohio, at the University of Toledo. It's approximately 90 miles from our Birmingham office to the university, so it was in the perfect location. Without that charger, my trip would have been over before it began.

There was one other charging solution I needed to sort out before I could set off with any confidence. I needed to find at least a Level 2 charger in Richmond so I could return to Michigan at the end of the weekend. Interestingly, the only place in the entire city with such a charger was Premier Toyota and Nissan, the local Toyota and Nissan dealer. With that sorted, I was ready to take off.

I departed work at my usual time with a fully charged Bolt and stopped by the house to pick up my dog, Ruby. She had a bit of difficulty getting into the high backseat of the Bolt EV, but managed with some lifting from me. From there, I headed down to Toledo as if I were driving a normal car.

For the most part, the Bolt felt like a normal car, and a good one at that. There were some differences. The near silence of the motor and the instant torque delivery make the Bolt fun around town, and going up highway ramps. The inclusion of a paddle for maximum regenerative braking also provided a fun challenge: one-pedal driving. It's strong enough that when timed properly, you almost never have to touch the brakes. Even the Bolt's "low" shift mode increases regeneration enough to keep your foot off the brake pedal most of the time. I found this combination so enjoyable that I drove the car almost exclusively this way the whole time I had it. 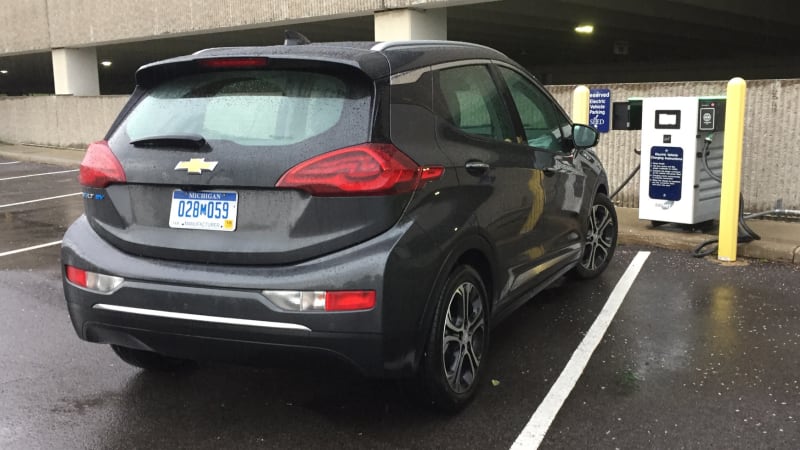 Aside from the powertrain, the Bolt EV also had fairly entertaining handling. The low center of gravity created by the battery pack in the floorboards helped keep the very tall Bolt from leaning much in corners. Its quick steering made it feel nimble and eager, as well. The interior, though slathered in cheap, hard plastics, at least featured a nice assortment of textures to break things up. The driving position in the airy cockpit was quite good, and it was easy to get comfortable. This was despite the relatively thin cushions on the seats.

About an hour and a half into my trip, I arrived at the University of Toledo parking garage where the charger was located. I had to download an app to my phone to use it, but it was fairly straightforward, and it was free. One thing that did concern me was there was just one SAE J1772 charging port on the charger. If someone else was plugged in and charging when I arrived, I would've been out of luck. The location was also a mixed blessing.

On the one hand, the University of Toledo is a very attractive place, and it had plenty of nice areas where I could walk my dog while charging. This was particularly helpful since Ruby gets pretty antsy when she's in a car that isn't moving. However, if you don't have a dog dictating your activities, there wasn't anything else around to kill time. There weren't any nearby restaurants, shopping, or other entertainment.

I left the car to charge for roughly an hour and departed the university with an estimated 200 miles of range. This specific charger didn't seem to deliver on the promise of 90 miles in half an hour, but it did the job. And with 200 miles, I calculated that I would make it to Richmond with 20 miles to spare. This assumed my driving would meet the middle, most likely estimate. The Bolt EV provides three range estimates when using the instrument panel in the "enhanced" configuration. On the left side of the screen are three numbers. At the top is an estimate if you drive particularly economically, at the bottom is one if you don't, and the middle, which in this case was 200 miles, was the estimate if you drive somewhere in-between. 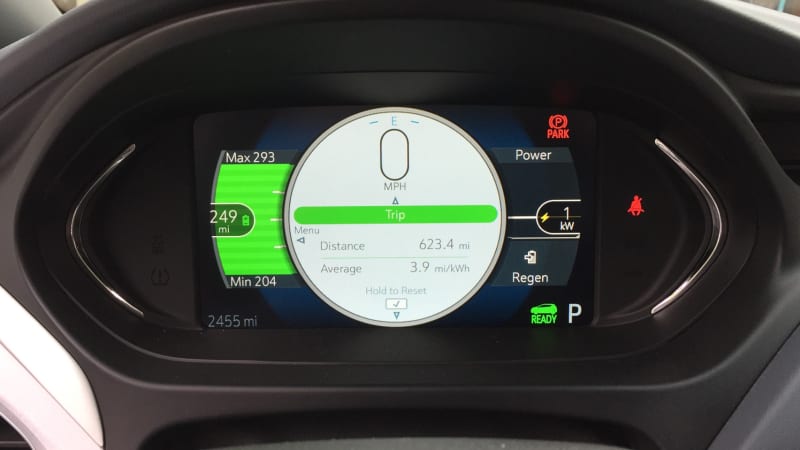 I started the second portion of the trip driving the same way I drive a normal car: I stuck to the speed limit and kept up with traffic. I kept the climate control off as much as I could, though, since anytime I touched the button, my displayed range dropped 5 or 6 miles. As I was making progress toward Richmond that windy, rainy night, I noticed that the remaining miles to my destination weren't decreasing as quickly as my range. The yellow bar that extends down to the low estimate when driving poorly was full, too. This was likely a result of constantly applying power, and never having areas where I could let off the throttle and let the car regenerate some energy. I realized that there was no way I was going to make it home driving that way.

For about two-thirds of that second leg, I kept my speed below the limit. I did what I could to match the distance left in my phone's navigation and the electric range. I started to go 65 mph in the 70 zones. Then dropped down to 60 mph, later. For the first time ever, I was thankful to enter 55-mph construction zones.

As I got into town, I triggered the low charge warning, which demanded that I stop and charge the vehicle. One issue with this warning is that it shuts off the remaining range gauge. I knew I had enough charge left, but not being able to see how far I could go wasn't reassuring. When I finally pulled up the driveway at my parents' place and shut off the car, I discovered that I had just 9 miles of range remaining.

That night, I went ahead and plugged in the Level 1 charger to scrape together a few miles for driving around town the next day. After running a few errands with my dad, we drove it over to the Nissan dealer to charge it until nightfall. My mom then arrived with their Subaru Impreza to bring us back home. Late that night, we returned to pick up the Bolt, which had nearly a full charge. Back at the house, I plugged it into the Level 1 charger to top it off before doing the return trip. The second time was less stressful, though, since I knew what I was in for. 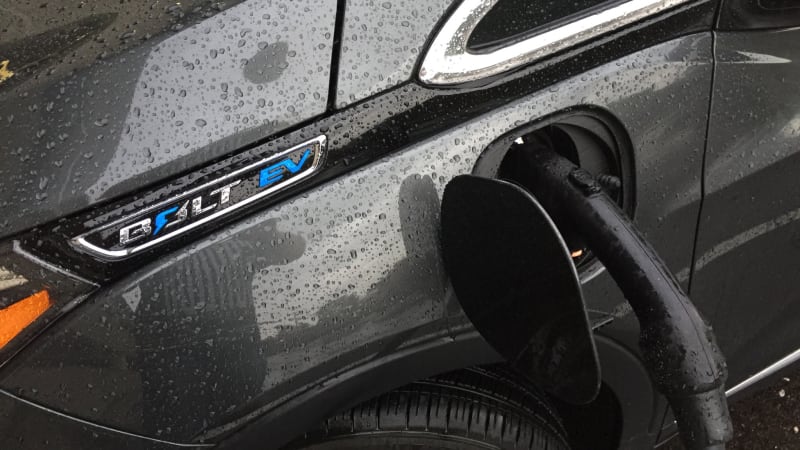 So as to the question of whether the Bolt EV is capable of doing long road trips, the answer is: sort of. My trip was successful, but only because of some important factors. Foremost among them was the Bolt's impressive range. Having a range of 200 miles or more finally opens up the possibility of long-range drives, even if it doesn't make them as straightforward as with gasoline-powered cars. The range estimator, despite shutting off near my destination, also came in handy, showing what the most likely outcome of my driving would be. Other primary factors were the fact that I could easily look up charging stations on the Bolt EV website and that there happened to be a DC fast charger in a good spot along my route. If it were too close to either my starting point or ending point, it wouldn't do much good. I also had plans for charging when I arrived at my destination. If I didn't have family to cart me around after dropping off the Bolt at the car dealer, I would have been stuck there for over 5 hours. No offense to car dealers, but that would have been an awful experience.

We are getting closer to a future where EVs are a true replacement for internal combustion, though. With slightly more range and more fast-charging stations, it wouldn't be hard to cover long distances in a Bolt EV. We're just not quite there yet.