Reese Counts
For months, rumors have persisted that the Lexus GS is dying, to be replaced in the lineup by the ever-growing ES. After spending some time with one, we can't really figure out why it hasn't happened sooner. For a long time, the smaller, less expensive, more efficient front-wheel-drive Lexus ES has been growing in size and dominating the rear-wheel-drive GS in sales. As customers move from sedans into crossovers, Lexus' five-car lineup of the CT, IS, ES, GS, and LS is looking a bit too crowded.

We shouldn't lament the loss of another rear-wheel-drive sedan. Lexus customers sure as hell haven't. There are better options available. Outside of the GS F, the Lexus GS isn't a car that encourages you to drive in a way that would take advantage of a rear-wheel setup. In the rain and the snow, the front-wheel drive ES is likely to be a more stable and sure-footed car.

If you want power, the less expensive ES 350 actually has a more powerful engine than the base GS 200t. It's nearly a second quicker to 60 mph as well. Stepping up to a GS 350 puts a nearly $12,000 divide between the ES and the GS. Yes, you can get the GS with all-wheel drive, but how many people well and truly need it? 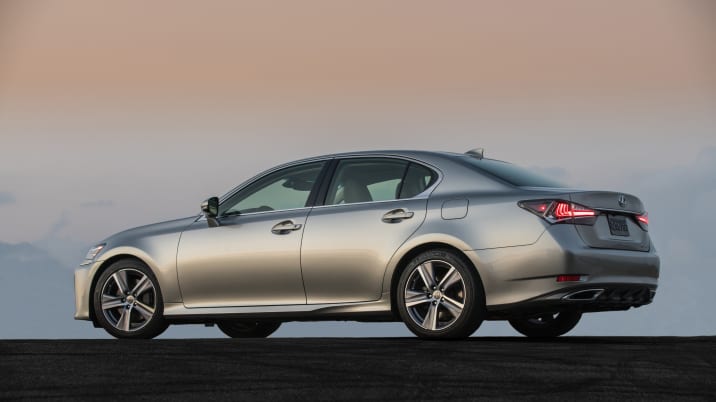 Size-wise, the ES is nearly identical to the GS, with the ES being longer but narrower by just over an inch in either direction. Being front-wheel drive, the ES has better rear packaging, meaning a roomier rear seat. The GS does beat the ES on cargo capacity, but on nearly every other measurement the ES is roughly identical or better. Another editor noticed the exact same thing when the current ES debuted nearly four years ago. That goes for pre- and post-refresh models. The ES isn't quite as handsome as the GS (as long as you ignore the spindle situation up front). From some angles, the ES looks like nothing more than the tarted up Toyota Avalon it is.

From behind the wheel, the GS fails to convey any sense of excitement or occasion. It's simply a shoulder shrug of a car. When competition like the BMW 5 Series or Mercedes-Benz E-Class offer both refinement and a decent infusion of fun, it's hard to make a case for the Lexus. The ES isn't any better, but with a base price of $39,895 it's a far more reasonable proposition than a $47,305 GS. Our test car was starting to show its age, as the competition has long sailed by when it comes to noise, vibration, and harshness. Lexus quiet this GS 200t was not.

All that said, it seems that customers have already spoken. In 2016, Lexus sold 58,299 ES and 14,878 GS. That's not an insubstantial divide. In fact, the ES is the automaker's second-best-selling model, only behind the RX, which moved 109,435 units. The ES even outsold the smaller, less expensive IS sedan. The RX, like the ES, is heavily based on already existing Toyota platforms. Having a Lexus-specific platform seems to have no sales benefit.

Customers want crossovers like the RX and NX, not big sedans like the GS. Enthusiasts might love models like the old inline-six powered GS 300s of the '90s, but they aren't exactly lining up for new Lexus performance products like the IS F, GS F, or RC F. Even in the 1990s, the GS 300 and 400 weren't sport sedans in the same vein as the BMW 5 Series. Dropping the GS to invest even more in the ES benefits Lexus' bottom line and improves a product consumers already want. Something's got to give, and it should be the GS.