We never thought the Hellcat would look so tame.

Reese Counts
After months of teasers, rumors, cryptic messages, and veiled hints, the 2018 Dodge Challenger SRT Demon is finally here, and it's as wonderfully insane as we hoped it would be. Finally we know the facts and figures that Dodge has been hinting at for so long. 840 horsepower. 770 lb-ft of torque. 2.3 seconds to 60 mph. A quarter-mile run of 9.65 @ 140 mph. While pricing hasn't been announced, Dodge is trying to keep it under $100,000.

That horsepower figure makes this the most powerful production V8 ever. With those 0-60 and quarter-mile times, it's also NHRA certified as the quickest production car ever. Someone with the means needs to line a Demon up against a Tesla Model S P100D. All that power and all of the Demon's trick launching software and hardware will throw a driver back against their seat with 1.8 Gs. Drivers will be seeing a bit of sky, as the Demon is the first production car to pull a wheelie from a dead stop. Yes, this is all totally and 100 percent street legal.


In order to make all this power, the red-painted supercharged 6.2-liter Hemi V8 has been significantly improved over the Hellcat. It's equipped with a larger 2.7-liter supercharger that turns the boost up to 14.5 psi, redlines at 6,500, and has what Dodge is calling SRT Power Chiller, a system that uses the air conditioning to cool the air coming in through the new Air Grabber hood scoop. In order to keep your engine running time and time again, there is an after-run cooler than cools the supercharger after the car is shut off.

The pistons and connecting rods have been strengthened to deal with the higher load. In order to feed enough juice into the engine, the Demon uses dual fuel pumps. We assume that a decent EPA rating wasn't on the top of the engineer's list. Oh, and the Demon can run on 100-octane with the press of a button. With the traditional SRT black and red keys, the Demon actually has three horsepower ratings: 500 with the black key, 808 with the red key, and the full 840 with the red key and 100-octane fuel. Don't worry, even if you have the black key, the Demon will drop the 1/4 mile in 11.59 seconds, still quicker than almost anything around.

Most of the rest you already know from the seemingly endless teasers. The Demon wears lightweight wheels with sticky 315/40R18 Nitto drag radials at all four corners. For true drag-strip runs, a crate of goodies comes with everything you need to put skinny wheels and tires on the front to reduce rolling resistance and drag. The crate's jack, cordless impact wrench, tire pressure gauge all fit neatly inside the Demon's trunk. There's even an air compressor.

In order to get the best launches possible, the Demon's TransBrake system locks the transmission output shaft in order to hold the car at a standing start. The shift paddle triggers the system, giving better launches than using two feet, holding the brake with one foot and the gas with the other. The transmission has been improved with a new torque converter that has a stall speed 11 percent higher than the Hellcat's.

The Demon's Torque Reserve system works in conjunction with TransBrake. A bypass valve closes, pre-filling the supercharger and building boost, even at just above idle. Then, on acceleration, fuel flow and spark are adjusted to make sure that just the right amount of horsepower and torque are being sent to the rear wheels. The system activates when the engine passes 950 rpm.

While TransBrake and Torque Reserve are all about dealing with power, torque, and how it can be efficiently exploited, the new Drag Mode works to reduce wheel hop. Wheel-speed sensors detect slip, cutting torque in order to keep the wheels planted. The front Bilstein shocks are set for firm compression and soft rebound damping, while the rear Bilstein shocks are set for firm compression and firm rebound damping. They hold that setting while under wide-open throttle, firming back up when the gas is released. 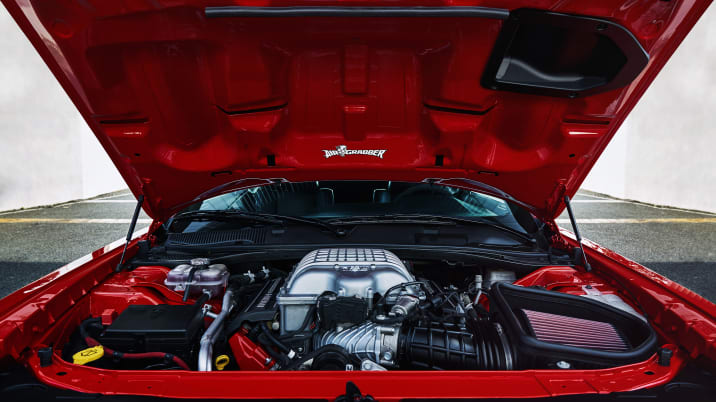 Quicker times aren't just about adding power. The Challenger is a porker, and the engineers at SRT know it. The team has cut more than 200 pounds of equipment from the Demon. Dodge lists the following reductions: There will be customers who have family and friends, so the spare seats and trunk carpeting can be optioned for $1. Other weight-addition options include a Harman Kardon 19-speaker, 900-watt audio system, a sunroof, and heated and ventilated leather front seats with a heated steering wheel. 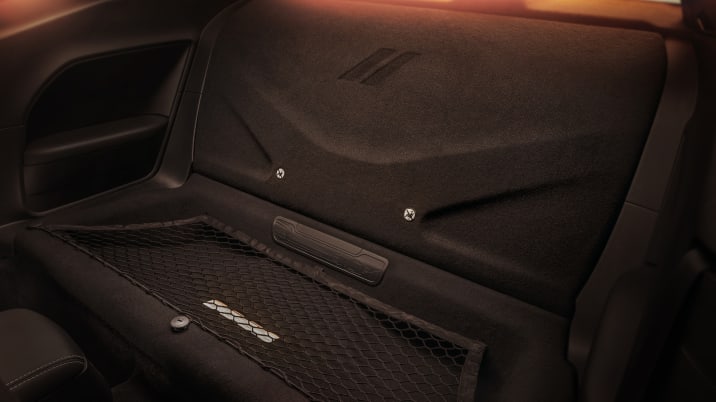 The Demon has selectable drive modes for the street, the drag strip, and even a password protected valet mode that limits horsepower, engine speed to 4,000 rpm, and disables the shift paddles and launch control. SRT Performance Pages can show info like lap timers, temperatures, pressures, and g-forces all on the 8.4-inch infotainment display.

Visual changes to the Demon are few but distinct. The large Air Grabber hood has a 45.2-square-inch scoop, the halo headlights now feature two air intakes instead of one, and large wheel wells cover the new wheels and tires. Demon badges replace the Hellcat ones, but it's not hugely different from what we already know.

Pricing hasn't been announced, but Dodge has already attempted to reassure customers by promising a three-year/36,000-mile limited vehicle warranty and five-year/60,000-mile limited powertrain coverage. Dodge has named Hagerty as the official insurance provider for the Demon, though there's no word on how much premiums will cost. Customers also get a one-day session at Bob Bondurant School of High-performance Driving in Chandler, Arizona. All in all, the Demon is one hell of a package. We can't wait to get behind the wheel.