Sales figures for cars in America have plummeted. In a robust overall market, where vehicle purchases have reached record-setting levels, car sales fell by an incredible 9 percent last year alone. SUVs and crossovers are drinking their milkshake, now accounting for nearly two in every three purchases, a profound shift from cars' majority dominance as recently as 2012. Audi's all-new A4 sedan was a bright spot in the brand's car portfolio in 2016, increasing by 16 percent, but A6 and A8 sales fell 18 and 17 percent respectively, and the A5 coupe's sales tanked by a shocking 35 percent. Mitsubishi sold more than three times as many Outlanders last year as Audi did A5s. Were you even aware that Mitsubishi still sold vehicles in America?

This trend is expected to continue, perhaps even escalate. But Audi refuses to give up on sedans and coupes. Credit the Teutonic monomania that requires a tit-for-tat escalation and diversification into every existing and invented market segment in which its rivals from BMW and Mercedes compete or don't. (An eminently sales-resistant five-door hatchback, the A5 Sportback, joins Audi's US car lineup in a couple months.) Whatever the instigation, we appreciate it. Cars are an intrinsically more efficient, and more fun, way to move people and goods around compared to SUVs. And Audi's new S4 sedan and S5 coupe prove that we live in a golden age of cars, especially enthusiast cars. 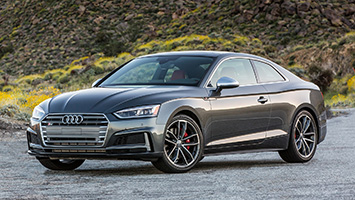 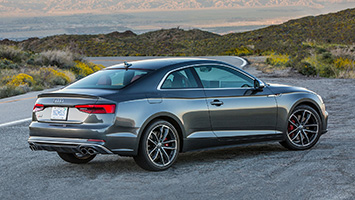 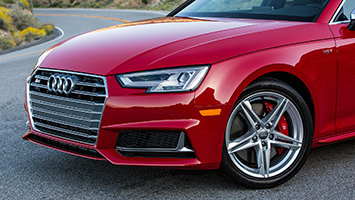 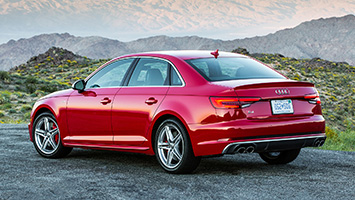 At first glance, you might not notice much of a difference between the outgoing cars and these all-new models. Part of this is because the design is extremely evolutionary – though when you start with a pair of models that so elegantly nailed their respective categories, it makes sense not to smash the mold. Closer examination will reveal additional facets, creases, and muscularity in the revised designs. It will also reveal greater differentiation between the related pair, especially around the headlamps, grille, and hood, all of which are meant to be more sporting and exclusive on the two-door, a play to fit with its more sporting and exclusive nature. You might place your faith in other more magical ideas, but we're believers in evolution.

The interiors of the cars are similarly evolutionary, and also far more similar. This is not a bad thing. Audi continues to excel in cockpit innovation. We credit it with reinventing the dashboard with the amorphously shaped LCD-screened Virtual Cockpit. Though what seemed like a radical step when it first appeared in the TT sport coupe – one screen, in a driver-centric binnacle – feels a bit watered-down here, with a second screen mounted above the center console, and a third projected onto the windshield.

In our era of compounding in-car information, redundancy is one solution: presenting content abundantly, in the hope that one site will be less distracting, or offering up the opportunity to divide and conquer: tune your dashboard to navigation, your center console to media, and your windshield to self-driving. We're not sold, but we suppose we don't have to be just yet. It's a work in progress. Still, it's a lot of work. 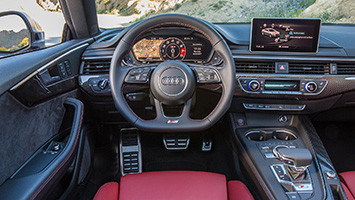 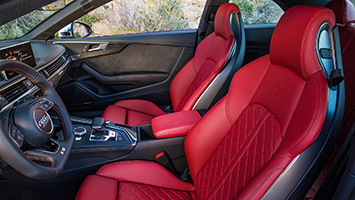 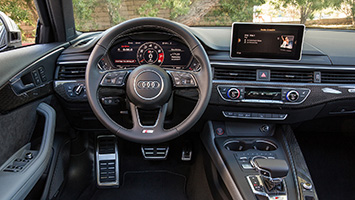 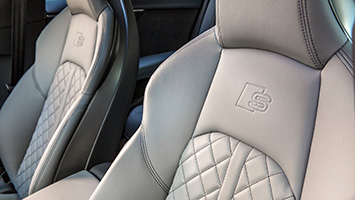 Also similar on the inside are the cars' deep insides, many of which are all new. Up front is a 3.0-liter V6 with a "hot V" twin-scroll turbo inside the valley. By reducing the distance the exhaust gasses have to travel before spooling up and pumping more air into the mixture, these cleverly located, vaned snails allow access to the full rush of 369 pound-feet of torque (up 44 lb-ft) from a very low 1350 rpm, boosting acceleration, and cutting a half-tick from the previous S4's 0-60 time, now dispatched in 4.4 seconds. Power is up 21 hp to 354, a number that peaks higher in the rev range, with a tunable exhaust note that falls on the spectrum somewhere between throat clearing and throat singing. We prefer the brash bombast of a V8 or the lyrical polish of a straight-six, but the power is there and it comes on strong, and the sound isn't unpleasant. Also, we can just turn up the stereo and blast the new Thundercat.

What we can't do is swap our own gears, except with the fiddly plastic plastic paddles – made of a material that, like much trim on the exterior of the S cars, is christened with the Orwellian portmanteau Alulook, meaning shiny plastic. If you want a stick-shift in the Audi A4/A5 family, you'll need to acquire the poverty-spec version. This practice returns the manual to one of its vaunted historical positions as the economy play, but denies its other as the enthusiasts' option. Audi claims this is because everyone interested in performance is motivated solely by metrics, and the auto box is faster than a manual. We like to shift, but the ZF eight-speed here was impeccable, regardless of whether we were cruising the highways in Comfort mode or Sport-pounding the heavenly, rippled San Jacinto mountain roads that climbed from and descended into the Coachella Valley. 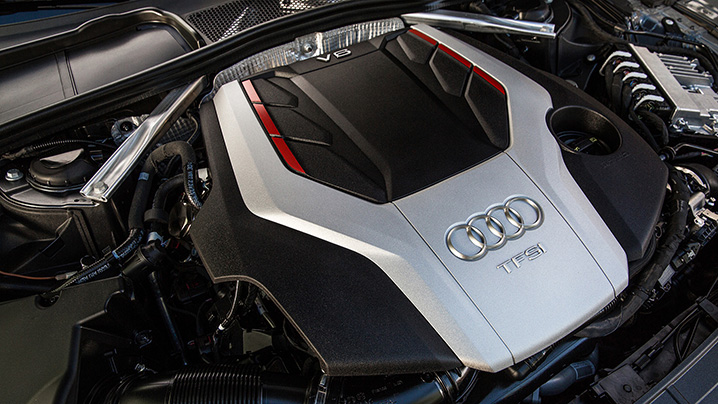 Transmitting all of these ideal ratios to the wheels is Audi's new front/rear torque splitting and side/side rear torque vectoring differentials. These computer-controlled mechanisms measure how and where power is needed, especially in aggressive or low-traction conditions, and, like Ratt, lay it down. Again its seamless, and provided us with the sensation that we are far more competent at driving than we are, allowing us to push the car closer to some evanescent limit that we could never possibly reach. At times, it was difficult to tell – without looking at one of the thirteen speed displays – whether we were driving at 50 or 100 mph. (Some of our cohorts on the drive had this determination made for them by the local police force. Schadenfreude is a German word.) Is this good? Is anything good in this ruined world?

We love the flexibility, ease of ingress and egress, maturity, capacity, and sleeper stolidity of sedans, so the S4 is our favorite of the pair, but that's a personal decision. If you prefer a vehicle that's more expensive and less practical, by all means pay the $4,000 premium for the S5. (Pricing alert: Base S4 $50,900. Base S5: $54,600. S4/S5 we drove, $65,000.) Either way, you're going to end up with a sporty and nearly flawless car. In fact, we are having a difficult time thinking of anything that we didn't like about this pair, aside from their proximity to perfection in balancing poise, efficiency, performance, and appearance.

But all of this perfection in a car somehow approaches the anodyne. Maybe this is why people are turning to crossovers. Cars have become so good, so devoid of objective flaws, that we have to add the handicap of a ridiculously high center of gravity, an extra quarter-ton of weight, and the handling liabilities of giant wheels just to feel like we are in touch with the road. 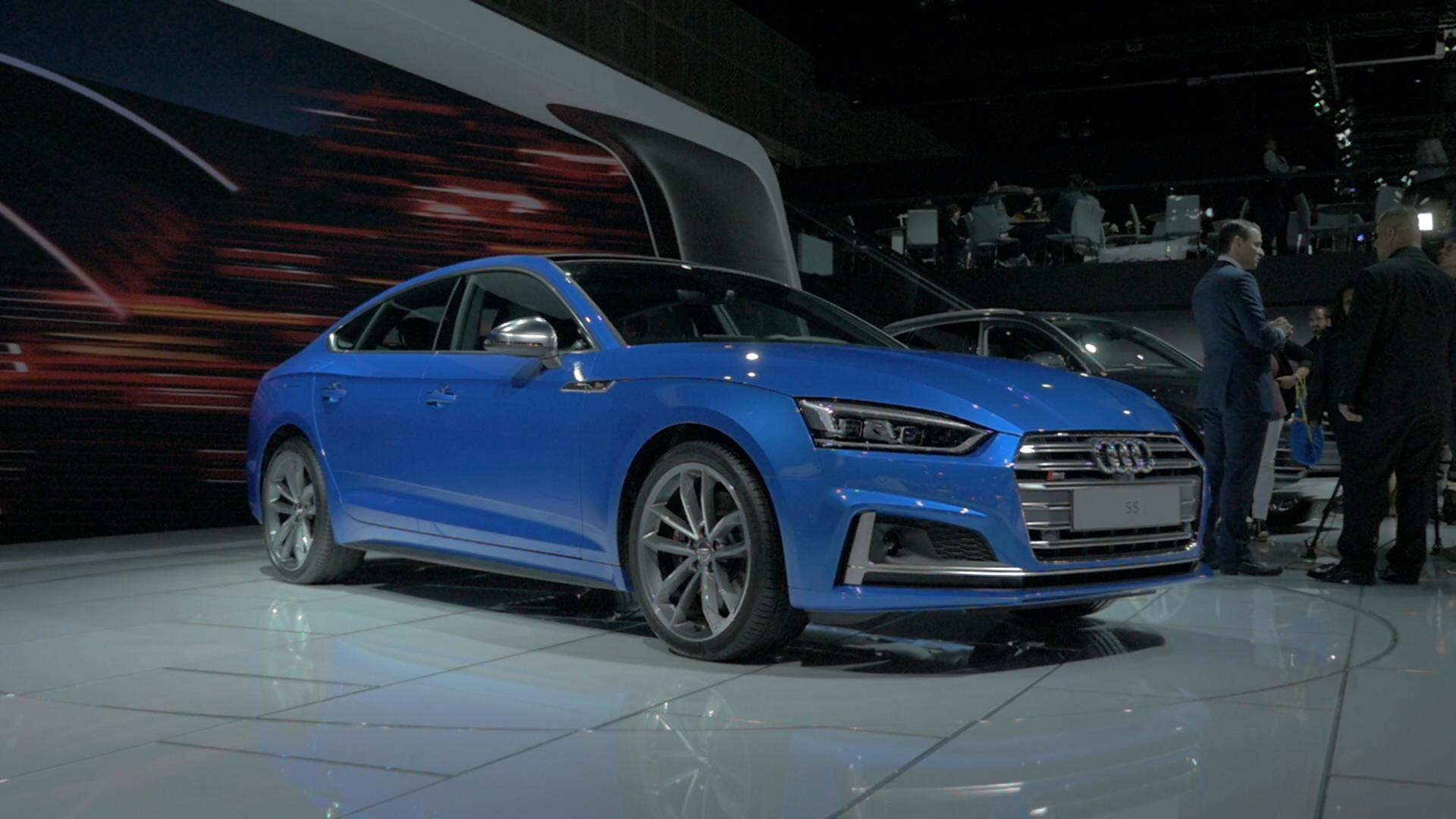