GOP import tax? If you drive a car, you won't like this idea

That's an eye-popping number, based on a study by Baum and Associates LLC, a West Bloomfield, Mich., firm that analyzes the car industry.

But those of us who can't afford Jaguars and Land Rovers might care more about the study's projected price increase for an average new car – $2,250 – a number that one industry official calls "a recipe for disaster" that could boost car payments by $100 a month, harm the US economy and even trigger a recession.

The dire predictions are based on an across-the-board 20 percent Border Adjustment Tax (BAT) – aka, a tariff – on imports, under consideration in Congress. (On the flip side, a BAT could also provide tax breaks to companies that export goods.) The intent: to bring back manufacturing jobs from overseas – and generate an estimated $1.2 trillion to offset lowering corporate and personal income taxes.

The idea is popular with House Republicans and Speaker Paul Ryan, but its odds are less clear in the Senate. And though President Trump hasn't endorsed a BAT, he reiterated a trade criticism in his speech before Congress on Tuesday night:

"Currently, when we ship products out of America, many other countries make us pay very high tariffs and taxes, but when foreign companies ship their products into America, we charge them nothing or almost nothing."

Alan Baum of Baum and Associates says his numbers may not accurately predict what would really happen under a BAT. "I am not for one second saying the price of a new Land Rover is going to go up by $17,204," Baum told me this week.

His team's index of a BAT's effects on new-car prices by manufacturer (see chart, below) was calculated simply by looking at the percentage of foreign car parts in every vehicle sold in the United States. But there are many unknowns, he says, and one of the biggest is how such a tax would impact carmaker supply chains, in which parts often are co-manufactured in multiple countries. 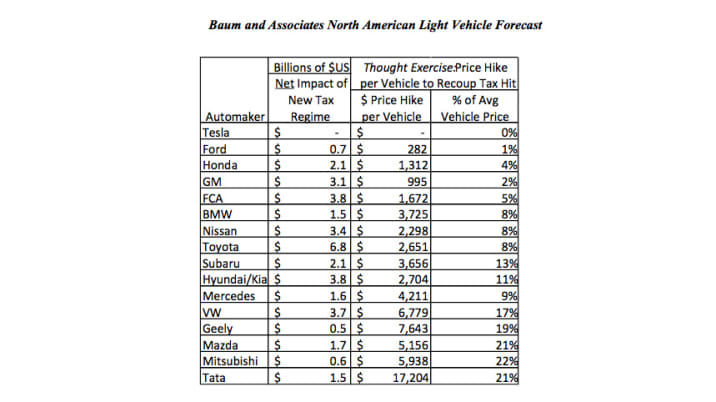 Baum says it's simpleminded to assume suppliers or carmakers could flip a switch and suddenly in-source their overseas manufacturing.

"We're at a peak in the market," Baum says. Politicians "want more direct investment in US manufacturing, but this is the exact wrong timing." He says a BAT could shrink the automotive sector by 6.5 percent, or 1.1 million vehicles (down from 17 million cars sold in 2017 without the tax). "So now the industry would be hurting, and you're asking them to reinvest in US production, which is absurd."

He says consumers would naturally react to an increase in new-car prices by switching to used cars – but they'd be hurt there, too, since car parts would also be hit with the tax. So even repairs will get more expensive, and older cars need more of them.

"This is a really fragile time," says Paul Ritchie, who owns a Kia and Honda dealership in Hagerstown, Md., and a Honda dealership in Altoona, Penn. "The average consumer hasn't seen much of an income increase, but car prices keep going up." He worries that any price increase for any reason will make even used cars difficult for most buyers to finance.

Michelle Krebs, senior analyst at autotrader.com, echoes Ritchie's concerns. "Clearly there would be some impact, and likely it would come in the form of higher vehicle prices at a time when the sales cycle is held back by the lack of affordability for many consumers."

Autotrader's 2016 research on affordability backs this up, showing an ever-increasing length of loans because Americans can't scrape up as much downpayment money for new cars as they did in 2009. Americans now owe a staggering $1.07 trillion in outstanding auto-loan debt. 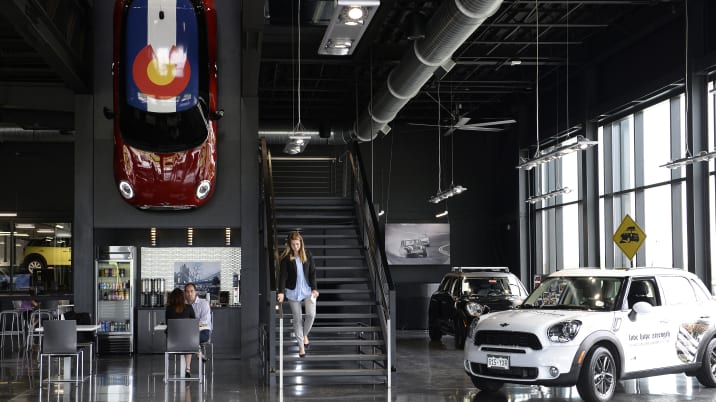 Jason Courter, COO of Honda of Kirkland and Honda of Bellevue in Washington state, says the BAT is going to hit anybody who drives, period. "Just look at the cost of tires – it's one of the biggest expenses for drivers." Though US tire production is relatively high, tires are a global commodity, and domestic production faces the same constraints in capacity that other car-parts suppliers do. Simply ramping up tire production isn't a ready answer to the BAT, at least not for several years.

Courter is also worried about vehicle mix. He says that if carmakers can't make a profit on some models, they just won't be sold in the US anymore, and that means less competition – so prices will go up even more. "That's really strange. This vote [the 2016 election] was supposed to be about less government, but this is about government handcuffing the free market."

Dave Conant is the biggest dealer we spoke with. He's head of the Conant Auto Group (CAR) in Irvine, Calif., with 1,300 employees and $1.2 billion in annual sales. CAR's Norm Reeves Honda dealership in Cerritos is consistently the biggest Honda dealership by volume in the world. Conant worries that Congress really hasn't gotten the message about how extraordinarily important dealers are to local economies, regardless of the makes and models they sell. He notes that whether you sell Fords or Hondas, it doesn't matter, because even domestic brands import a lot of their parts and will get hurt by the BAT as well.

"I don't expect customers to think about any of this when they come to buy a car," Conant says. "If they can't afford the payment, that's why they walk out the door." 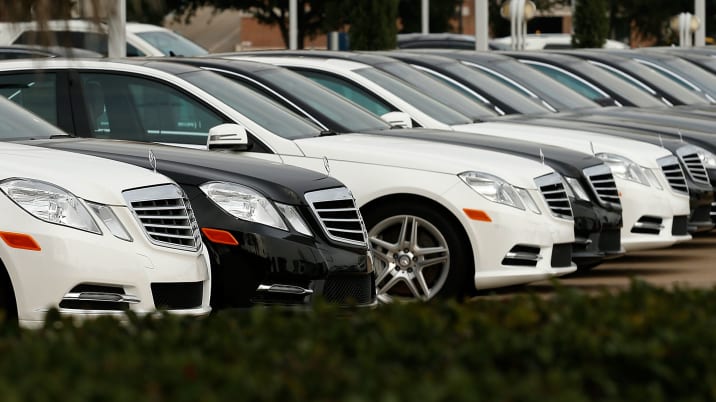 But he does want Congress to understand that sales tax, property tax, and all of the other grease in the gears of the economy, from insurance to the repair business, greatly impact every American. "When we sit down with city managers in Cerritos, they tell us that we're paying for the parks department, the police, the sheriffs, all of it."

Conant's not exaggerating. A 2015 Center for Automotive Research study found that nearly 7 million Americans are employed directly or indirectly in the auto sector, and combined make half a trillion dollars in income – and pay roughly $300 billion in taxes.

Cody Lusk, chairman of the American International Automobile Dealers Association, a trade group in Alexandria, Va., has called on his dealers to come to Washington and voice their concerns to Congress in a meeting on March 8. Lusk is blunt about the BAT. "It's a recipe for disaster. It's a tax on consumers, and it means the average car payment goes up by almost $100 a month – and that's on a car that just goes up by a $2,000 sticker." Lusk fears the BAT could plunge the US back into a recession and said as much in a letter to association members.

Car dealers have heard Lusk and the AIADA loud and clear. Dave Conant will be in Washington, as will Jason Courter and Paul Ritchie. Members of the House and Senate who want to revise America's tax structure – and risk hurting car sales – may not like what they've been hearing in town halls at home this week. And they really won't be able to ignore what they hear from car dealers when they get back to Washington in March.