For Europeans, the new, 250-mile Zoe is the electric car to get.

Europe is in love with an electric car that most Americans will never see, let alone drive. The Renault Zoe is the best-selling EV in Europe, moving over 50,000 units across the continent since going on sale in late 2012. It has been named the " Best Electric Car for less than £20,000" at the What Car? Awards in the UK for four years in a row. And now, undisputedly, it's an even better electric car.

That's because Renault has managed to increase the Zoe's range with an impressive 41-kWh battery, called the R90, that gives an official NEDC range of 403 kilometers (250 miles). Sure, the NEDC range is a optimistic fiction concocted by European regulators – something that even Renault admits – but the new Zoe's real-world range should be around 200 km (124 miles) in the winter and 300 km (186 miles) in the summer. Compared to the first-gen Zoe's 250 km (155 mile) NEDC range, this is a tremendous improvement.

And that's exactly what Renault wanted to show off during a recent drive along the coast of Portugal. The company debuted the new Zoe at the Paris Motor Show last year, but the exterior and interior design is practically identical to the model that came before. All that's new are the electronically folding side mirrors, different wheels, and some fresh exterior colors. The new Zoe is in dealerships now, and we figured we'd tease our American audiences with some tasty French forbidden fruit.

It shouldn't surprise anyone that the Zoe is similar to the Nissan Leaf. When the Renault-Nissan Alliance worked on its EV strategy, it decided to focus on mass-market EVs, and that means that both cars share a simple practicality that can work for many people. Both are little hatchbacks, but the Zoe is more rounded and perhaps cuter. Inside and out, the lines are sparse, with very little that could be considered fancy. Well, maybe the headlights and taillights.

The dashboard, too, is uncluttered. The main screen in front of the driver gives only a few data points: speed, gear, distance traveled and energy used, and the remaining battery charge. Of course, since the theme of the test drive was "forget the battery," Renault staff put a sticker over the battery indicator and told us to just head on out. We did, and never once worried we'd run out of range even after many hours behind the wheel. It was a clear indication that this car is meant to subverty "range anxiety." In fact, given the European tendency to not drive less than 40 miles a day (something about 80 percent of drivers do), it is entirely feasible for a Zoe commuter to only charge up once a week. That's impressive.

And the drive is impressive, too, if you engage with the Zoe on its own level. As an easy-to-use pure electric vehicle with excellent range, it's great. it's not the quickest or fastest EV, but every car doesn't need to beat the competition in every aspect to be a winner. On the coastal roads and busy Portuguese highways, the Zoe felt right at home with the rest of traffic. The new battery pack – which is heavier than the previous version but not physically bigger – weighs down the car on its soft suspension, so you're going to experience a bit of body lean if you take a corner aggressively, but it's not offensive in any way. Steering touch is light enough, and accurate, but it's not going to wow someone who only buys cars for their curve-hugging capabilities. Renault isn't trying to convince anyone of anything else, either. The Zoe's doesn't have a sport option, for example, just an eco mode that can be turned on or off. This is a practical commuter EV, and it should be measured as such. 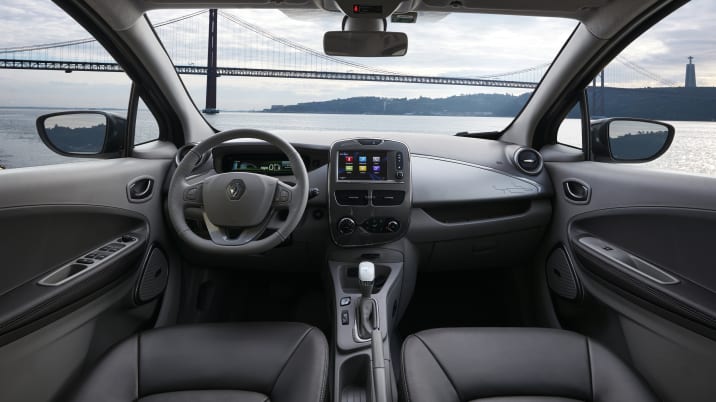 The Zoe is smaller than the Leaf, but feels plenty big inside. The ceiling is covered in a thin fabric that's printed with a quiet electric pattern. Visibility is great and the seats are comfortable. The Zoe doesn't have the extra little zip and features that potential competitors like the Chevy Bolt EV (the Opel Ampera-e in Europe) has, things like the paddle-controlled regen and better connected-entertainment options. There is a limited Bose version (known as Edition One in France) that comes with seven speakers that are smaller, lighter, use less energy than the standard units. It also comes with heated front seats and a special Yttrium Grey color.

Renault has made the Zoe affordable by doing something that no automaker is doing right now in the US: battery leasing. That means sticker prices that seem outrageously low, with the Zoe starting at just 23,600 euros ($26,481). That's before any governmental incentives, but then you also have to add in the monthly costs to lease the pack. This could be as low at 69 euros ($77) a month with up to 7,500 kilometers (4,660 miles) a year included, or 119 euros ($134) a month for as many miles as you want. You can also, of course, simply get a traditional lease for the whole car starting at 149 euros ($167) a month. Prices may vary by country, but you can see that the general price for a new Zoe is not out of reach for most new car buyers.

When it comes time to charge, the Zoe utilizes Renault's Chameleon charger, which can plug into almost any EV-friendly power source, from a wall outlet to a fast charger ( Tesla Superchargers excluded). There are currently 80,000 public charging points in Europe and 5,000 fast chargers. What's somewhat disappointing is that the Zoe's fastest charging option is not with the R90 battery, but with a similar 41-kWh pack called the Q90. The R90 offers the 403-km range, while the Q90 is only good for 370 kilometers. But, when plugged into a 43-kW charger (the best the Zoe can handle), the Q90 is able to get to 80 percent 65 minutes, while the R90 takes an hour and 40 minutes. So, you lose a little bit of range for shorter recharge times.

Charging is really the only complicated thing to think through when it comes to the Zoe. Everything else about the updated EV is easy and obvious. Put it all together, and the Zoe is the new standard for what an EV is supposed to be like in 2017. Easy to use, practical, reliable, and affordable. Too bad we can't get it here in America.