Michael Frank
Autonomy is on the minds of automakers, and Nissan in particular is thinking about one thing: getting a human being to pay attention while an autonomous car, driving itself, is lulling that person into doing exactly the opposite. Nissan's solution is to loop in someone outside the car to guide it through challenging scenarios, and end run around the problem of getting a distracted human to re-take control of a vehicle hurtling toward some confusing or dangerous scenario. We sat down with experts at Nissan to get a deeper, behind-the-scenes take at how the automaker thinks this system will solve some of the problems currently facing autonomous vehicles.

But first, some background so you're up to speed about the terminology involved. There are cars for sale right now that can perform some driverless functions, like the 2017 Mercedes-Benz E-Class that has automated steering and automated passing. Those functions are considered Level 2 on a scale of 1 to 5 (1 is some basic assistance and 5 is complete driverlessness). Tesla's Autopilot ranks as a Level 3, also referred to as "conditional autonomy", in which the vehicle does everything provided there's a human driver to respond to requests for input. But the 1-5 metric is merely a working rubric for discussing autonomy, and it's not even universally accepted among all carmakers.

Because Level 3 autonomy allows the driver to "tune out", the hard part becomes getting the (slow, perhaps distracted) human to pay attention again at some point when the (quick) autonomous system reaches a problem it cannot solve on its own. We've already seen limited autonomy fail with the Tesla Autopilot crash this past summer, and engineers at Google's Alphabet have argued that once drivers are hands-off you can't expect them to react in time to re-take the wheel.

That's why Nissan has proposed an interim step, which it calls Seamless Autonomous Mobility, or S.A.M. This system loops in what's referred to as a "mobility manager", a human that can step in and remotely navigate the vehicle through a challenge that the autonomous system can't handle. For instance, to zipper merge or navigate a construction zone – things that a human can do well, but are problematic for autonomous systems. Nissan says part of the advantage is that every S.A.M. solution to a real-world problem would populate a cloud-based AI, helping other autonomous Nissans on the road navigate similar issues on their own. 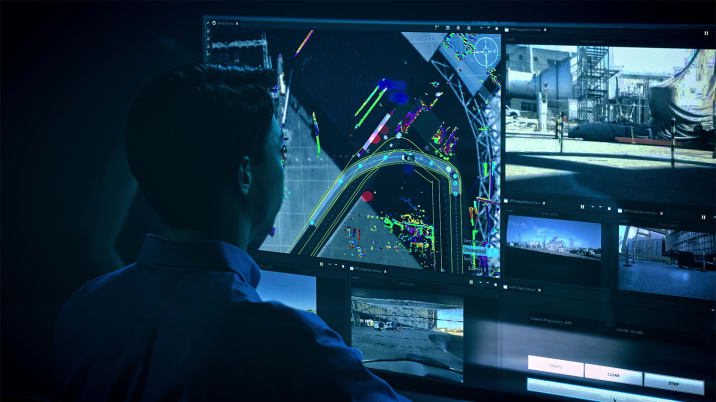 Dr. Maartin Sierhuis, who directs Nissan's Future Lab in Silicon Valley and used to work at NASA on autonomy, wants us to think of S.A.M. like "air traffic control, where a remote human is trusted with guiding a plane." Of course the problem here is one of scale, and Nissan acknowledges that S.A.M. won't be broadly implementable until a few key supporting technologies roll out. One is vehicle data communication of at least 4G speed. They say in this pilot form S.A.M. could outperform competing models where stand-in drivers are sometimes introducing more, rather than less danger – for example, the autonomous Uber Volvo in California whose human backup driver didn't prevent the SUV from running a red light.

Regardless of statistical safety improvements, there are less tangible barriers to the idea of Level 3 autonomy that may make Nissan's S.A.M. system more socially acceptable. Iyad Rahwan, a professor at the MIT Media Lab who studies artificial intelligence interaction, says even if partially driverless cars are actually safer, social acceptance barriers are very steep. He cites the Tesla crash last summer as the perfect example. "There were some 15,000 human-driven car accidents that occurred in the U.S. that day and in this instant the only victim was a passenger," yet it was all over the national media. "No matter how rare they are, these accidents will raise wide speculation about the decisions the car could have made to avoid harm."

That's precisely the argument Sierhuis has for having a second human being in the equation, even if they're not physically in the car. "Nissan is not convinced that we can do a system that allows the driver to stop paying attention. It's better for us to say, 'We're not ready, and we should not experiment in the real world.' We have to build up the technology before we get to this next step, and the teleoperation system is one way to minimize the risk."

Sierhuis says only studying human behavior on the roads on a vastly larger scale will enable full autonomy, because we're constantly breaking the laws while driving while not actually causing accidents. Teaching a robot how to do this is, at present, is beyond the capability of any computerized driving system any single company can invent on its own.

Given all of that, as a society we're still iffy on the notion that behind the wheel of some car soon we'd be able to quit paying attention and trust the machines with our lives, with or without a teleoperator as backup. Nissan's S.A.M. system might be a useful stopgap until we can hopscotch directly to Level 5 and finally, comfortably, climb in the backseat and chill for good.