When the Subaru BRZ debuted in 2012, it was heralded as a return to the traditional Japanese sport coupe formula – a compact, lightweight, rear-wheel-drive runabout that hearkened back to greats like the original Toyota Celica, Mazda's RX-3, and the Nissan 240SX. Japan is covered in mountains, and that's where its enthusiasts honed their hooning. Cars that emphasize handling, not horsepower, make the most sense there.

Now, five years on, Subaru is using the model's first facelift to further differentiate it from its Toyota cousin. The BRZ is Subaru's ultimate vision of a sophisticated driver's car, more string-backed gloves than flat-brimmed hat. To prove the point, Subaru invited us to drive the refreshed 2017 specimen, along with 2016 models for comparison, at Japan's legendary Fuji Speedway.

The BRZ's revised styling makes the distinction painfully clear right off the bat. It now sports a squarer jawline, with a chin described by senior designer Yuki Kumono as aircraft-inspired. LED DRLs are embedded in the new headlamps, moved up from the space they once shared with fog lights. A side note for Subaru fans: The C-shaped DRLs are called "hawkeyes" internally, which is sure to cause confusion among Subarists who have already given that name to the 2006–07 Impreza WRX and STI. 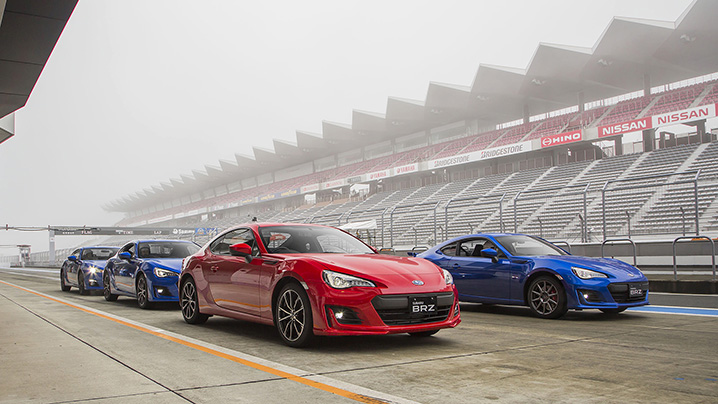 Freshened taillights and a reshaped spoiler update the badonk, and the Subie has new fender inserts. Styling is of course a subjective matter, but anyone who says the sea-creature maw of the post-Scion 2017 Toyota 86 is better looking is clearly wrong.

Ultimately, though, the question on everybody's minds is, "Does the BRZ have any more danged power?" The answer to that is yes, technically, but only on certain cars. The 2.0-liter boxer four makes five more horsepower and five more pound-feet of torque only on manual-transmission cars. That brings the totals to 205 hp and 156 lb-ft. Cries for a turbocharger have gone stubbornly unanswered.

In typical Japanese fashion, it's not the numbers that matter. Subaru has focused instead on the overall driving feel, that elusive metric that can't be expressed on a spec sheet or through the frothing internet comments of armchair racers. Subaru's engineers, some of whom are trained as the company's expert test drivers, have toiled away at a host of improvements for the base Premium trim, the upper Limited grade, and a new Performance Package that's available on top of the latter.

Sliding into the 2017 car, the cabin immediately feels more upscale and welcoming than the Spartan pre-facelift model's. Most of the touchable surfaces, including the dash, door panels, and center console, come slathered in soft stitched materials instead of the old hard plastic. 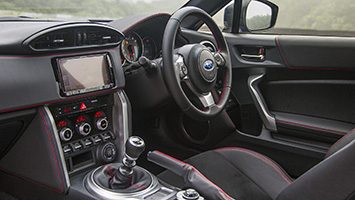 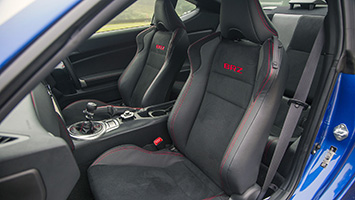 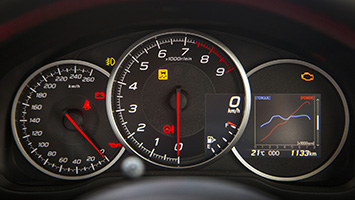 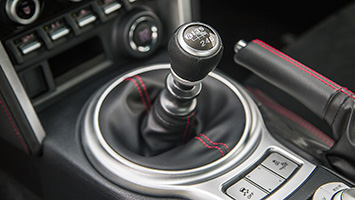 The steering wheel gets an upgrade as well, with the old plain-Jane design giving way to one with grippier and suppler cross-stitched leather. That may not seem like a big difference, but after white-knuckling it around a fast circuit, your hands will thank you. A big change from the 2016 is that there are actual controls on the spokes – basic stereo functions on one side, and a way to flip through vehicle information on the other. The latter controls a 4.2-inch TFT screen that displays everything from outside temperature to power and torque curves, replacing the rather blank-looking analog fuel and engine temp gauges of old.

Now about that power. Engines with the extra ponies are easily distinguishable by their red intake manifolds. The part also switches to an aluminum one-piece casting with an increased internal diameter, letting the boxer inhale more air. That's combined with a strengthening of the engine block and crankshaft mounts, polished cams, and a low-friction fuel pump for the direct-injection system that appears on all 2017 BRZs. Manual cars switch to a shorter final-drive ratio of 4.3:1 instead of 4.1. The torque bump from the engine changes and the gearing massage mean acceleration times should theoretically improve.

The place to test that would be Fuji's nearly mile-long straight, but since it's summer we had rain at the track. A fog as opaque as miso soup had rolled through the foothills, reducing visibility to just a few meters. We thought it best not to shoot off turn one at triple-digit speeds as it emerged from the mist. 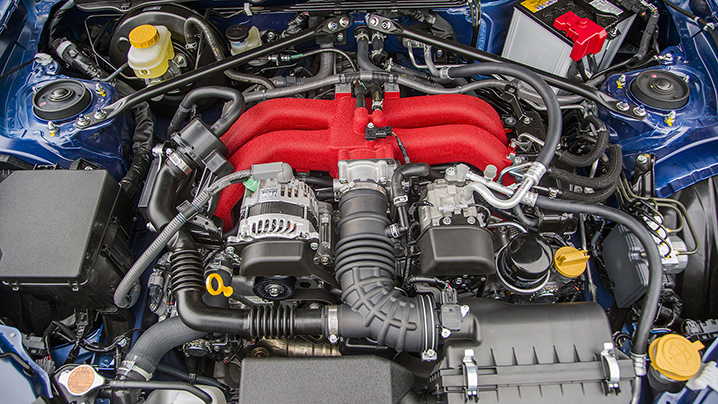 Likely, though, most buyers won't really notice the slight improvement in forward thrust. The new car gains a few pounds – 21 for Premium, 15 for Limited – and while the power-to-weight ratio still increases, it's by a scant 0.25 pounds per horse.

What is noticeable, however, is how the accelerative forces now work in unison with the new suspension. Remember how the original BRZ had softer rear springs than the FR-S? The updated Subaru's rear springs are softer still. The revised boxer finds a dash more mid-range torque in the sweet spot from 2,500 to 4,000 rpm where you're most likely to be powering out of a turn, and the softer rear squats to the tarmac more to put that down when you need it.

Engineers said that the suspension changes to the rear allowed for more fine-tuning in the front. The result is an increased directness and linearity in the steering feel, and at least the sense the car will more obediently go where it's pointed.

Addressing one of the bigger complaints, Subaru's engineers have also reprogrammed the VSC stability program to work in conjunction with the more cooperative suspension. VSC now leaves control in the driver's hands for longer before kicking in, and when it does it's far less intrusive – the touch of a guardian angel rather than a jarring deus ex machina jolt. The intensity and eagerness to activate have been reduced in all drive modes, but the reduction is greatest in the most aggressive setting. Subaru cites this as the reason for rechristening Sport mode to Track. That should have you thinking twice before activating it on the street. 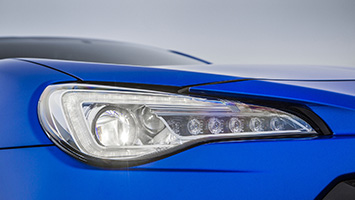 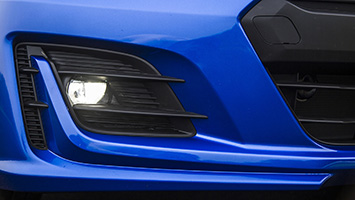 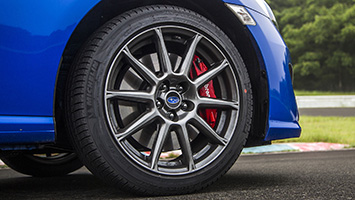 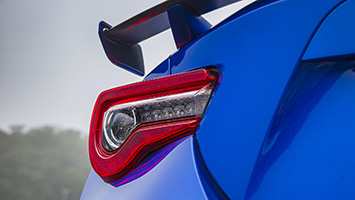 In practice, the combination of these changes makes for a more surefooted car, but more important they inspire confidence. Fuji is notorious for its confounding late apexes, requiring mid-corner corrections from drivers unfamiliar with the track even on a day when said apexes are dry and actually visible. The improved suspension and steering feel gives you the confidence to make those adjustments when the outgoing model would have lost its footing.

For an even more planted feel, there's the new Performance Package. While it doesn't add any more "go" to the Limited, it does provide Brembo four-pot calipers and 12.8-inch rotors up front, and twin-piston counterparts and 12.4-inch discs out back (compared to the standard 11.6- and 11.4-inch rotors) to improve braking. A set of exclusive 17 x 7.5-inch wheels make room for the larger stoppers, finished in black and recalling the RS-Watanabe racing rims popular with the touring cars that once roamed Fuji Speedway.

Despite the wheels being half an inch wider than stock, the tires are the same size, just stretched a little. The Performance Package also throws in Sachs ZF dampers that absorb irregularities in the road with a quicker response rate without, in theory, compromising ride quality. We didn't really get a chance to test this out on Fuji's glass-smooth surface, but the nicer parts should address some of the outgoing BRZ's issues, including a tendency to feel unsettled in corners on roads not maintained as well as an F1 circuit. 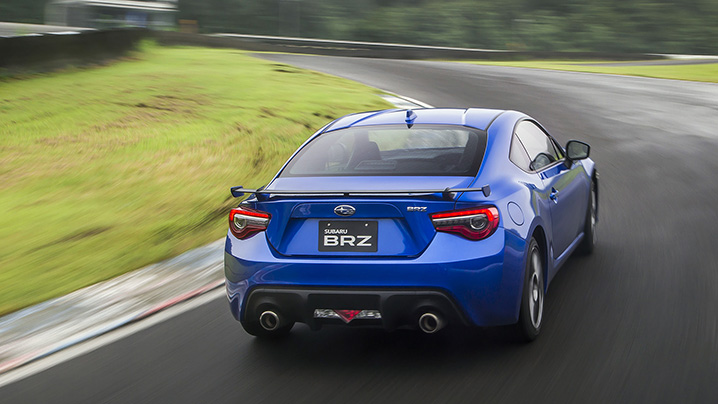 In short, Subaru has made one of the best-handling cars under $30,000 several hairs better. You can't help but have fun in a car so capable of making you feel like a cornering hero every time you make a left. But if you're buying it for the extra power, you've got the wrong idea.

If we had to guess, the horses are just a bone engineers threw out there because the 2017 BRZ's real improvements are difficult to quantify. This car is for backroads, not boulevards; drives, not drags. We know you won't believe us because that number 5 looks so small and insignificant on paper, but we'll scream it from the mountaintops until we're hoarse. It's about the handling, not the horsepower. 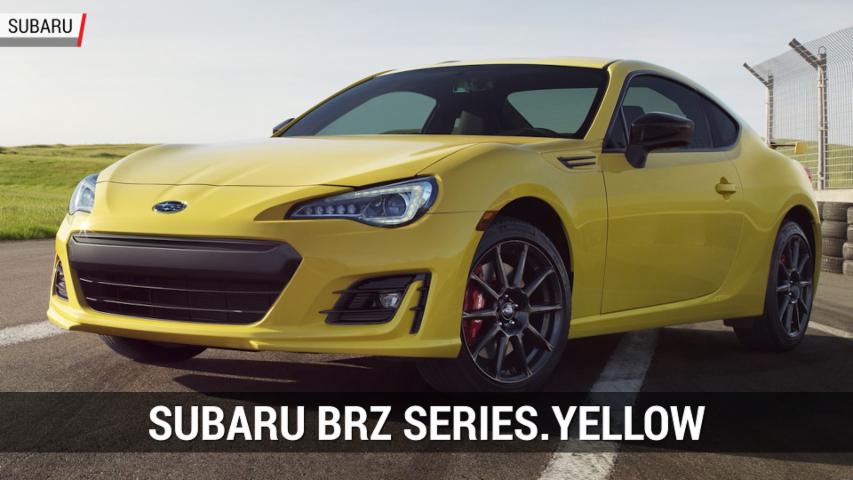