The least mini Mini is getting, um, less mini. Great, now we're done with the "mini" jokes from here on out. The all-new, second-generation Countryman is wider, longer, and rides on a stretched wheelbase. And oh yeah, the plug-in hybrid is the first electrified Mini since the Mini E last seen in 2010.

By adding 8.1 inches of length and 1.3 inches to the width, the Countryman is easily the biggest Mini ever built. As a key-carrying fan of Mini's older pint-sized models, this is a disappointment. But the size increases pay dividends in the cabin, making this effectively the first Mini that won't result in assault charges for forcing passengers to ride in the back. The 2.9-inch stretch in the Countryman's wheelbase contributes to a hefty 3.8-inch jump in second-row legroom, and there's around two inches of extra shoulder room in both rows.

There's a bump in cargo volume, too. Trunk space increasesby 1.1 cubic feet with the second row up, and 5.4 cubic feet with the back seats folded down. That cargo space is easy to reconfigure, too, with a 40/20/40 split in the seats and up to five inches of fore/aft movement. So yes, the Countryman is an annoyingly large Mini, but it's inarguably the most versatile and family friendly vehicle ever built by the British brand.

Whether the overall dimensions please or anger you, everyone can get excited by the changes under the hood. Leading the pack is the first-ever hybrid Mini. Called the Cooper S E Countryman All4, Mini paired its excellent 1.5-liter, turbocharged three-cylinder with a 7.6-kilowatt-hour lithium-ion battery and an 87-horsepower electric motor for total output of 221 horsepower and 284 pound-feet of torque, which is enough for a brisk 6.8-second run to 60 miles per hour. Fully charged from the plug on the driver's side front fender, the latest electrified Mini can cover 24 miles at up to 77 miles per hour. We like that kind of balance. 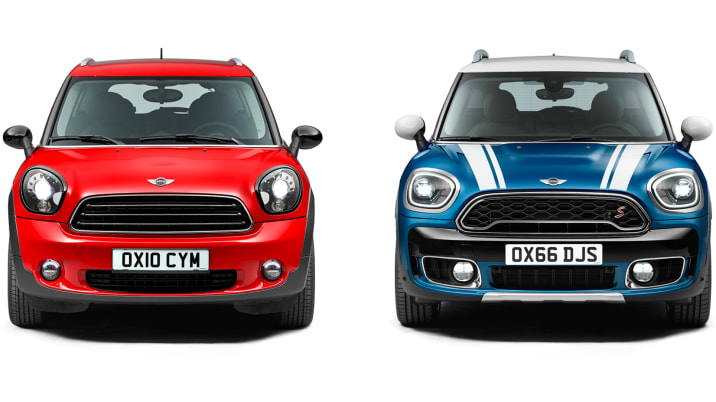 But while the Cooper S E Countryman is almost certainly very efficient, there are a few sacrifices. The biggest is the 9.5-gallon fuel tank, which is far smaller than the standard car's 16.1-gallon tank. That's not a problem if you have time to charge regularly, but it will be an annoyance on sustained road trips. Like the BMW X5 xDrive40e, the Countryman PHEV will feature three separate powertrain modes. Auto eDrive leaves things up to the car's computers, Max eDrive forces the car to run on electrical power alone, and Save Battery does exactly what it says.

If you prefer a traditional gas-powered Mini, the Countryman mimics the Clubman's powertrain options. Owners can mate either a base 1.5-liter, turbocharged three-cylinder with 134 hp and 162 lb-ft of torque or a 2.0-liter, turbocharged four with 189 hp and 207 lb-ft with a standard six-speed manual or an optional eight-speed automatic. Regardless of transmission, the base Cooper hits 60 in 9.5 seconds while the six-speed Cooper S takes 7.3 seconds to the automatic's 7.2 (the optional All4 all-wheel-drive system drops those last two numbers by 0.2 seconds).

While you're welcome to weigh in on the new exterior and interior look in Comments, we'll simply say that while the Countryman still isn't the prettiest car ever – it's trying way too hard to look butch – Mini refined the first-generation car's look in favor of something less polarizing. We mostly like it. As for the cabin, it's a big improvement. Based heavily on the Clubman, it gets light-up trim pieces and a similar overall layout for the center stack and transmission tunnel.

All three new Countryman models will debut next month at the Los Angeles Auto Show. The gas-powered cars go on sale in March, while the Cooper S E Countryman arrives in June. Mini should release pricing and fuel economy shortly before those dates.