But it wasn't weird in the way you might think.

Joel Stocksdale
At a recent press event focused on industry trends, Ford offered the opportunity to ride in one of the automaker's autonomous Fusions. As someone who had never ridden in a self-driving car before, I was expecting a strange experience. I was right, just not in the way I expected.

Naturally, I've spent my entire automotive life in cars driven by humans, whether myself or someone else. I knew that it would be freaky and disconcerting to ride in a vehicle that is steering, accelerating and braking on its own. I even prepared to feel a little nauseous, in part because unlike a human driver, an autonomous car doesn't really telegraph its moves, so you don't know exactly how the car will act.

That's what I was expecting when I hopped in the back of an autonomous Fusion with one of our video producers. In the front seats were two Ford engineers who would tell us about how the technology worked and keep an eye on things in case something went wrong. The drive took us around the Ford development campus featuring roads with actual signs, lane markings and real traffic. We never got above the speed limit of 25 miles per hour, but the trip was enough to demonstrate how the car recognizes signs, signals, pedestrians, and other traffic. We even had a chance to witness the vehicle wait for an unexpected pedestrian at a crosswalk. 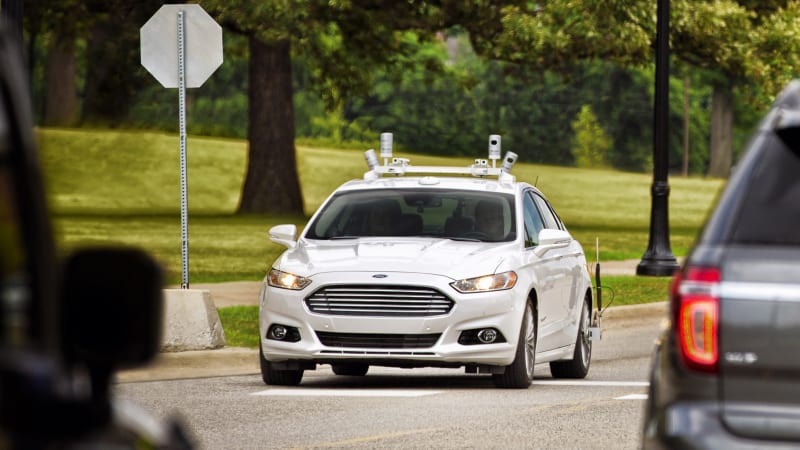 During the ride, it was easy to forget that the car was driving itself. The machine drives more timid than most drivers, which the engineers explained was on purpose, but all of its inputs felt very natural. It executed turns smoothly, even during left turns against traffic. Every time the vehicle accelerated from a stop or started braking for another, it acted with enough urgency that it didn't feel slow, but never so abruptly that it wasn't smooth. The driverless system also maintained its lane position very well, never getting too close to either side, and never bouncing between sides. Mostly the experience just felt like a human driver was at the controls.

Would it have been a more conventionally bizarre experience if there wasn't anyone sitting at the wheel, or if I were sitting at the wheel? Perhaps. If that were the case, it would be more obvious what was happening and I might be fighting the instinct to intervene. But even then, I think I would get used to the feeling far quicker than I previously would've imagined.

And that's what was so weird. The whole experience was so mundane, I felt comfortable with it almost immediately. I never gasped and shouted as the car started turning by itself. I never felt sick starting and stopping. This huge technical feat felt amazingly similar to an average taxi ride. And that might be the highest praise an autonomous vehicle could get. The more normal autonomous cars feel, the more quickly people will get over their fears.

Ford plans to have the first road-ready self-driving cars available to car- and ride-sharing services in 2021 with consumer versions to follow. Considering how far Ford has come, that target seems plausible. It could be the start of the autonomous age.