And it can travel up to 31 miles using electric power alone. Hybrids are for more than saving fuel, according to Porsche. To wit, the German automaker's upcoming 2018 Panamera 4 E-Hybrid boasts 462 horsepower and 516 pound-feet of torque courtesy of its 2.9-liter twin-turbo V6 (330 hp and 331 lb-ft) and electric motor (136 hp and 295 lb-ft). All that power is sent to all four wheels through an eight-speed PDK transmission, resulting in a 4.4-second 0-60 run and a top speed of 172 miles per hour.

For those keeping track at home, those performance stats put the E-Hybrid a few ticks behind the 2017 Panamera 4S, which uses a more powerful version of the twin-turbo V6 engine to hit 60 in 4.0 seconds (with the optional Sport Chrono package). The payoff, though, is in efficiency. There's a maximum electric range of 31 miles with a fully charged battery, and the engine isn't needed until speeds top 86 mph. That means the majority of drivers won't need to use a drop of gas for most daily driving chores.

The E-Hybrid ought to be pretty fun to drive, too. In the previous Panamera Hybrid, the accelerator pedal had to be pressed at least 80 percent of the way down to get maximum electric motivation. For the new version, every electric horse is available at all times. Coupled with the nature of turbocharged engines, we'd imagine there's going to be a lovely wave of torque at around-town speeds and on highway on-ramps. 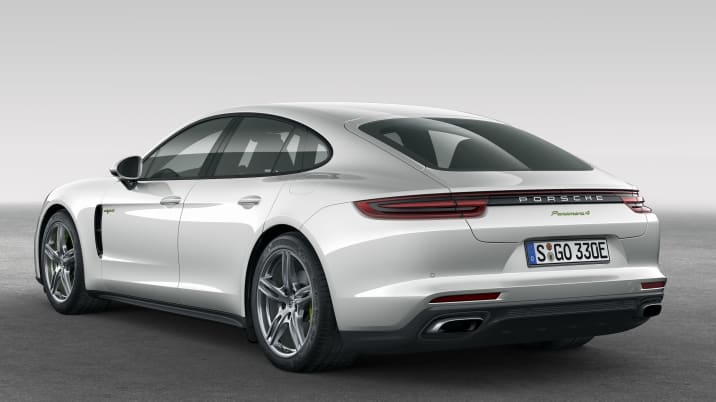 A liquid-cooled, 14.1-kWh, lithium-ion battery is located under the floor of the cargo area. It takes 12 hours to charge on a standard outlet, or as little as 3 hours with an optional high-speed charger. As with other Panamera models, most of the interior buttons have been replaced with touch-sensitive panels. E-Hybrid models get unique programming for the dual 7-inch displays in the dash and the 12.3-inch touchscreen atop the center stack that shows various power meters and driving tips to increase efficiency.

Porsche's Sport Chrono Package comes standard on the Panamera E-Hybrid. In addition to the Sport and Sport Plus modes of the steering-wheel-mounted mode switch, there's an E-Power mode that relies solely on electricity, a Hybrid Auto mode for maximum gas/electric efficiency, an E-Hold setting that switches the car into gas-only mode to preserve the battery, and an E-Charge mode that forces the gas engine to keep the battery fully charged. If you want maximum performance, you'll want to keep the switch in Sport Plus.

Expect the 2018 Porsche Panamera E-Hybrid to hit US showrooms this summer. Prices aren't yet known, and official EPA fuel efficiency figures haven't been released. We should know more soon, though, because the hybridized Panamera will make its official debut at the upcoming Paris Motor Show. In the meantime, check out the high-res image gallery above.