Instead of autonomy taking the driver out of the picture.

Pete Bigelow
Some of the leading companies in the race to develop self-driving cars have insisted the quickest path toward an autonomous future is to eliminate human involvement in the driving process. Toyota executives see the benefit of keeping drivers around.

Gill Pratt, the company's top research executive, said Thursday that Toyota plans to pursue two parallel paths toward autonomy, one that would remove motorists from the driving equation and a semi-autonomous approach that would further entrench humans behind the wheel.

The latter would consist of a system that amounted to an autonomous "guardian angel," Pratt said, that would allow humans to maintain control of their vehicles in almost all cases except when it can help them avoid poor decisions or imminent dangers. Such a Guardian Angel system would combine and enhance the advanced safety features already appearing on production cars today.

"What we're trying to do is develop a system that will not be the cause of an accident." – Gill Pratt

"Toyota intends to do both," said Pratt, the CEO of the recently created Toyota Research Institute. "We're not making claims about doing one or the other. Both are important and ... Guardian Angel is a tremendously valuable approach." His comments, made during the GPU Technology Conference in San Jose, California, provided fresh insight into how Toyota intends to invest the $1 billion it earmarked for the Research Center's projects.

Developing autonomous cars that keep drivers involved is a starkly different approach than the one currently plotted by companies like Ford and Google, the latter of which has proposed doing away with equipment like steering wheels and brake pedals. Executives within their autonomous ranks have extolled the importance of removing the possibility of human intervention, because it allows them to bypass some regulatory ambiguity and complications of a thorny handoff of control between man and machine.

Pratt, pictured below, doesn't disagree with that path. For elderly and disabled people who cannot drive a car, he said that was "essential." But it will also take longer to achieve. In the meantime, he said development of a system that retains human involvement could be deployed sooner, and more quickly reduce the 1.2 million traffic deaths that occur worldwide every year. 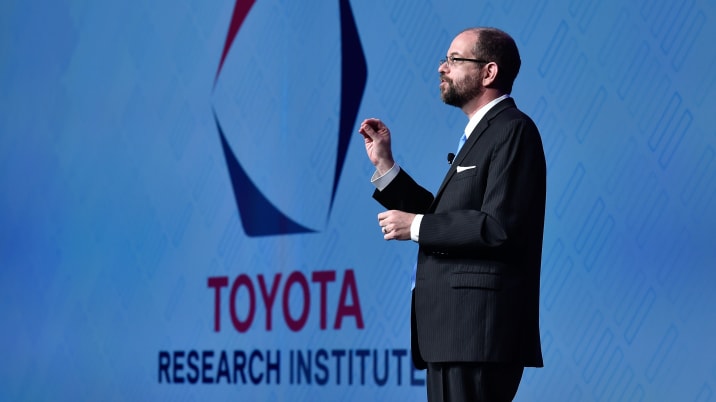 Much of the technology required for both types of systems overlaps, but Toyota will develop them separately. The company it will pursue Guardian Angel at its lab in Palo Alto, California. Full autonomy will be researched at a new lab near the University of Michigan in Ann Arbor, Michigan, Toyota announced Thursday, a facility that is separate from the company's technical research center in the area. Approximately 50 employees will work there. That lab is scheduled to open in June. A third lab affiliated with MIT in Cambridge, Mass., will handle simulation and deep learning.

While the technology behind the systems may be similar, there is a key philosophical difference. To be considered competent, a fully autonomous car must safely drive all of the time. Toyota vehicles around the globe may log approximately 1 trillion miles in a given year, which makes the odds of success dim. The primary competence of a Guardian Angel system, on the other hand, would be to do no harm.

"What we're trying to do is develop a system that will not be the cause of an accident," Pratt said.

Rather than ignore a human driver's skills, a Guardian Angel system would rely them as much as possible. Toyota estimates the combined safety features in such a system would be active less than 1 percent of the time, allowing drivers to retain control except in the instances where they're about to screw up. Pratt likened it to a parent assisting a young child who's learning to swing a golf club, ensuring a smooth experience.


"A perfect Guardian Angel might never engage if it's driven by a perfect human driver." – James Kuffner

And rather than create complications of a handoff between the car and a human driver, it would eliminate them because the human would be expected to maintain control all of the time. That leaves its usefulness up to the driver.

"A perfect Guardian Angel might never engage if it's driven by a perfect human driver," said James Kuffner, chief technology officer for the Toyota Research Institute. "If the human always does the right thing, it will never engage. ... I think it's easier, in many ways, to have a blend of these systems, because most of the time the human is driving and it intervenes only when it needs to."

Guardian Angel might be a smarter extension, in many ways, of the automated emergency braking functions which Toyota has pledged to make standard in all its cars starting in 2017. A dozen other automakers agreed on a voluntary pact last month to make the safety feature standard beginning in 2022, and Toyota's five-year head start may be a key differentiator for car buyers. But Pratt wishes automakers wouldn't necessarily view the technology as a competitive advantage as much as an area where they could collaborate with each other.

The advent of such systems doesn't only affect an individual vehicle, it affects every other car and pedestrian on the road. Collaboration, he said, "is right in the moral sense and right in the economic sense. If we can share the burden of making our cars safer, cars will be safer for all of us, and then we can spend our money on areas where we are competing more. That's more effective."