Birds on the dashboard, an orb as copilot, it's all here. Forecasting 100 years out is a tough job, so we'll forgive BMW if not everything in this concept comes true in the next century. It's the first of several that will celebrate BMW's centenary this year – concepts from Mini, Rolls-Royce, and BMW Motorcycles will follow later – and aims to guess what and how we'll be driving in the distant future. Although it's no longer a question of if, we still don't know when cars will make the switch to autonomous driving. So yeah, there's a lot up in the air.


What this concept promises is more of everything.

What this concept promises is more of everything: more comfort, more assistance, and a more intense experience – when you want that. Plus new, lighter materials, increased customization, and of course all the connected smarts you can throw (or will be able to throw) at a set of four wheels and some seats.

It starts inside with an out-there dashboard display. Going a step further from the typical head-up display, the Alive Geometry transforms everything in your periphery into a digital blanket of context stretching from the interior to some of the exterior panels. This tessellation of moving triangles is supposed to mimic a flock of birds to bring you subtly changing information about what's going on around you.


BMW gives this idea the made-up term of 4D printing.

BMW gives this idea the made-up term of 4D printing, as it believes that in 30 years it will be possible to rapidly prototype this flock-of-informative-seagulls design to provide function (the fourth dimension, apparently?) in addition to the physical form. We'll check back in 2046. BMW also notes that displays in current cars will give way to OLED displays and then to the windshield-as-display concept that has been promised for a while and is seen here. 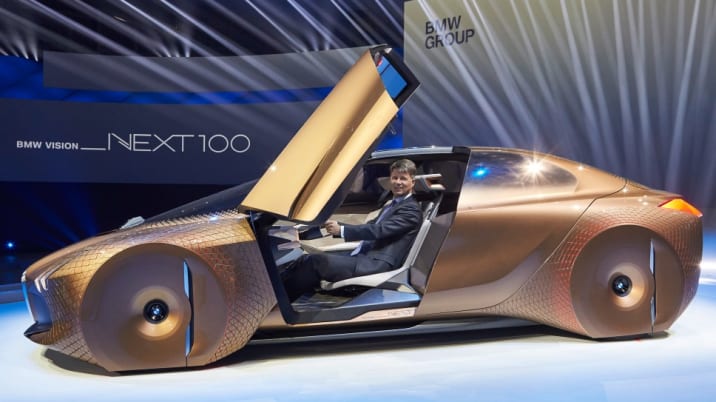 About the car driving itself: BMW highlights two new driving modes for the concept, Boost and Ease. Boost is for when the driver is in control, the vehicle doing what it can to heighten the experience and the driver's awareness. It can use the Alive Geometry to show the best line or warn of other cars, integrating all the current active safety tech and more. BMW believes this will allow the driver to improve instead of just going faster. We would have called this mode iStillDriveSometimes, but hey, marketing still has 100 years to come around to that one.


The important idea is that the driver will still have the choice to drive.

In Ease, the car transforms physically, collapsing and moving the steering yoke out of the way and relaxing the center console away from the driver. The car takes over, and in this scenario Alive Geometry's 800 pieces can wave at the occupants to foretell braking and turning. Outside, lighting elements in the kidney grille as well as the head- and taillamps tell others which mode the car is in. The important idea is that the driver will still have the choice to drive, assuming future laws will allow humans to continue operating heavy machinery. The company has said nothing about what would power this future car, something that we find a bit upsetting.

BMW has also thought of some interesting solutions to problems autonomous driving will create that we'd never considered. For instance, when the car is in control, how will pedestrians know when it's safe to cross in front of it at a stop? The nod or hand gesture one human gives to the other in this situation will be replaced by actions from what BMW calls the Companion. This all-knowing (HAL 9000?) orb will constantly mine the driver for information but also act in its stead when the car is in control. So a green glow tells those in a crosswalk that it sees them and it's safe to cross.

And the tenets of BMW design, rendered here in copper to retain some human-friendly warmth among the tech, should stick around as well. Much of the body would be fabric-like, with the fenders able to stretch when the wheels turn to keep them shrouded for aerodynamics. (The concept uses interlaced hard parts to simulate this effect.) Wing doors are really the only choice, because, hey, it's the future. BMW also sees using cast-off residue from making carbon-fiber components to create nonstructural body panels.

We'll have more on this concept and BMW's year of celebrations from the kickoff event being held in Munich today.