The black lacquer badge affixed to this 1964 Porsche 356 Cabriolet has two words on it: "356 Outlaws." When it was first produced by a jeweler in the 1980s for the Emory family, the word "Outlaw" was a term of pride only meaningful to the father-and-son team that were building these custom Porsches. Outside of their Orange County garage, the Outlaws attracted less respect than outlaw humans.

In the past few years, Magnus Walker has helped Outlaws blow up outside nontraditional Porsche circles. Collector car brokers now happily promote Outlaw builds, and online how-to guides will teach you to create your own. Despite their newfound recognition, Outlaws began with Gary and Rod Emory and continue with Emory Motorsports.

We didn't drive the black 1958 Porsche 356 Emory Special and silver 1959 356 Outlaw in the gallery – completed cars move through the shop so quickly that we couldn't organize a shoot and a drive on the same day. We drove a 1964 356C Outlaw that gets by with leather hood straps, deleted bumper guards, Raydot fender mirrors, and a drilled fuel filler cap poking through the hood. The interior is dressed in red leather in sanguine contrast to the beige German square weave carpet along the bulkheads. The three gauges are taken from a 904, the racer Porsche developed to succeed the 718. 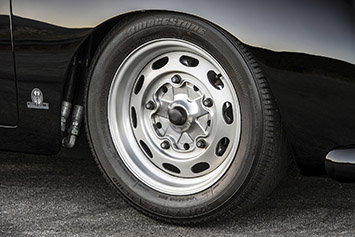 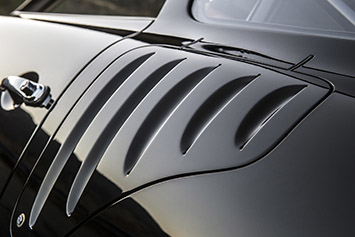 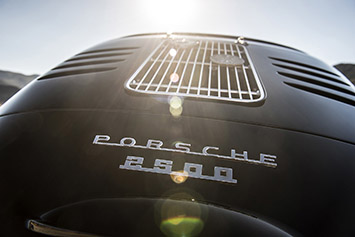 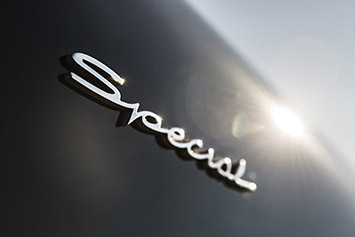 Emory's tuning lineage is as old as the cars he restores.

Emory's tuning lineage is as old as the cars he restores. His grandfather Neil ran Valley Custom Shop in Burbank from 1948 to 1962, channeling and sectioning the slab-sided bodywork of '40s and '50s domestic sedans in ways that OEM designers would later adopt. Neil's tenure also included building the body for the SoCal Streamliner in 1950, the first hot rod to hit 200 miles per hour at the Bonneville Salt Flats.

When Chick Iverson opened a Porsche dealership in Newport Beach he asked Neil to run the body shop. Neil's son Gary would become the parts manager. When he saw inventory being thrown out for lack of space, Gary then opened his own Porsche parts operation. Gary's son Rod started playing in the warehouse from the age of six, mixing and matching pieces to make go-karts and help build the Porsches Gary would sketch.

Rod began his first restoration, a 1953 Porsche 356, at 14 years old. He spent two years on it, then went vintage racing. This wasn't a concours build – growing up in a parts shop, Rod had no qualms about using whatever suited his purpose and vision. The cars he and his dad built, with their leather hood straps, rally lights, louvers, and trimmed bodywork, that first earned the term "Outlaws." 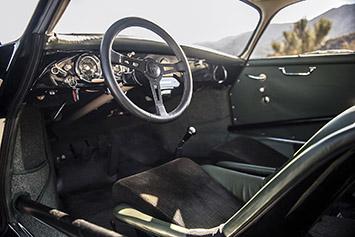 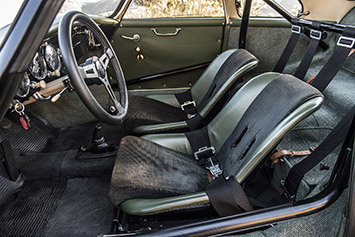 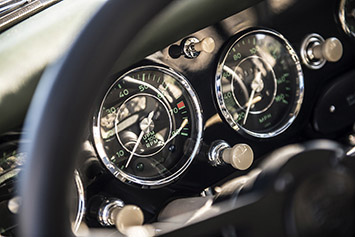 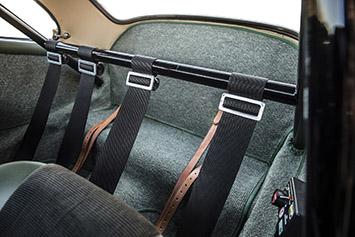 The droptop has 30 more horsepower and 24 more pound-feet than a 2016 Mazda Miata, but weighs about 340 pounds less.

By the time he was 18, he was doing so well building and racing that a well-heeled customer who liked the look of his cars asked him about commissioning one. The answer to that question would become Emory Motorsports, building and restoring Porsche race cars and providing race support. When those gentleman racers said they wanted a street-legal vintage Porsche with the same attitude, Rod dove into the full-time work he does today, creating Emory Outlaws and Emory Specials.

It takes roughly 18 months to finish a build because of the mechanical and aesthetic detailing. Outlaws get less sheetmetal reshaping than Emory Specials, which are sectioned and have their wheel arches raised or their B-pillars thickened. Either model delivers coiled exuberance borne of power and simplicity.

A stock 356C from that year weighed 1,971 pounds and was powered by a 1.6-liter flat-four engine putting out 88 horsepower and 90 pound-feet. This Outlaw weighs 19 pounds more and is powered by a 2.4-liter flat-four with 185 hp and 172 lb-ft. The engine is the 3.6-liter six-cylinder from a 964-type 911 with its two middle cylinders removed, then welded back together and fitted with treats like Weber 48 IDA carbs, a custom twin-plug distributor, and a Carrera-style dry sump oil tank. 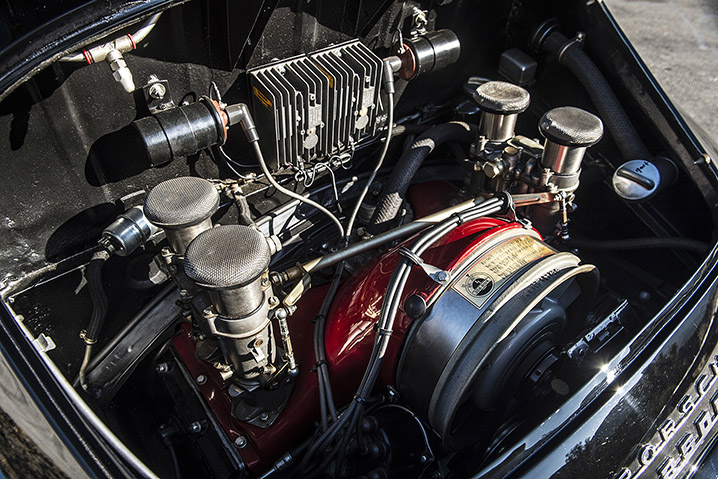 The sensations are era-appropriate, but with the reassurance of knowing you can slow down or duck out quickly if things go south.

When you want to spring that exuberance, merely press the throttle. The droptop has 30 more horsepower and 24 more pound-feet than a 2016 Mazda MX-5 Miata, but weighs about 340 pounds less. The 356 is fractionally larger in every dimension than the Miata but it doesn't feel that way, likely due to its wheelbase being eight inches shorter and having front seats so close together that you'll bang elbows with any passenger wider than Olive Oyl.

All of its custom internals are designed to serve the daydreamy Shangri-La of vintage 356 motoring, so this isn't a modern 356, it is a more modern 356. Thanks to the custom headers and M&K stainless muffler, the wake of that custom 2.4-liter motor churns with a similarly raw, air-cooled buzz. The engine is pleased to wail just beyond 7,000 rpm before you grab another gear from the four-speed transmission confiscated from an early 911 and adapted to 356 duty. Emory machines use new internals for the steering box, making that beautiful Nardi wheel more stable on center and more enjoyable to turn. Instead of the rear swing axle there's an independent rear suspension from an early 911, aided further by 27-millimeter rear torsion bars, plus sway bars front and back. The Rudge-style alloys hide original disc brakes beefed up with a dual circuit master cylinder and wider 195/65R15 Dunlops. 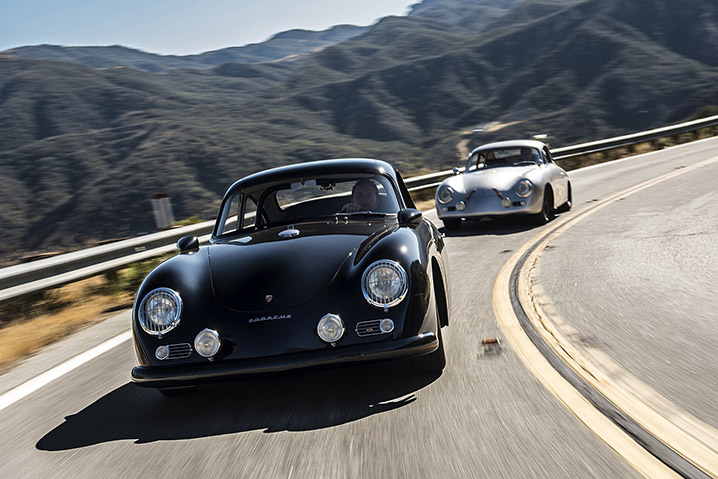 The Emory Outlaw is a way to take a rousing trip back in time and make sure you don't die there.

Even with double the horsepower of the original, nothing happens suddenly. Hard acceleration is done to draw out that engine note, not as a plea for speed. Pulling a few tenths of a G through a sweeper is done simply for the thrill of momentum or gently rocking that giant Nardi tiller to hold the ship steady when you really push. Everything happens just so, but it happens with confidence – a vital driving aid when your seating position has you staring down the barrel of a trailer hitch on SUVs. The sensations are era-appropriate, but with the reassurance of knowing you can slow down or duck out quickly if things go south. The Emory Outlaw is a way to take a rousing trip back in time and make sure you don't die there.

They aren't cheap, either – figure $175,000 to mill around with the scraps on the ground floor. Acquiring the silver Outlaw in the gallery would call for $250,000, the black Special $350,000. There is pedigree in that purchase price, though; thirty years ago an Outlaw was the derelict, disavowed uncle in the vintage Porsche family, now it gets a special corral at Porsche events due to the work the Emory clan began. And with the automaker's blessing, Rod is restoring the first Porsche to win an international race: a 1949 Gmund 356 SL that captured its class at Le Mans in 1951. We saw the work-in-progress at Rennsport Reunion V in September, we'll see the jewel complete at Pebble Beach next year.

We're going to spend the time from now until then trying to convince Rod to lend us an Outlaw to make the trip.