Chris Bruce
Contrary to popular belief, multiple studies indicate that Millennials don't really hate driving, and they're behind the wheel about as much as folks from decades ago. The generation is even a big fan of rental cars, according to J.D. Power's 2015 North America Rental Car Satisfaction Study. The new research finds Millennials – defined here as those born from 1977-1994 – as some of the most enthusiastic customers around. The age group actually boosts satisfaction for the whole industry.

In the latest study, J.D. Power rated the industry's average customer satisfaction at 798 points out of a maximum 1,000, which is the highest-ever score with the current methodology. For the annual research, investigators ask vehicle renters at airports to rate companies in six criteria, and they then tally the results on this index. 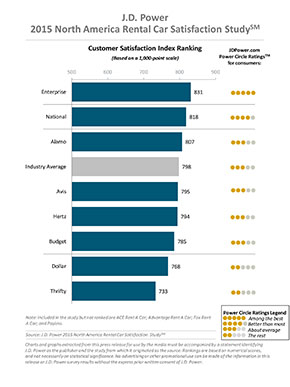 Enterprise scored the best results for the second consecutive year with a score of 831 – up 26 points form 2014. National and Alamo also beat the national average at 818 and 807, respectively. Thrifty came in last with 733 points. You can see the full results in the table to the right.

Millennials are largely to thank for this record score because they gave the highest ratings to rental car companies of any generational group. At 34 percent, the age group was also the second-largest surveyed – just behind Baby Boomers (1946-1964) at 40 percent. Customers were also happier in general this year. Business traveler satisfaction jumped 30 points from 2014, and those on leisure trips rated the industry 22 points higher.

J.D. Power suggests that rental car companies continue to keep Millennials satisfied because they aren't afraid to express an opinion on the Web. Of them, 47 percent write online reviews. Only 27 percent of people from Gen X (1965-1976) do that and just 10 percent of Boomers.
Show full PR text
Millennials Drive Surge in Rental Car Customer Satisfaction

Millennials—also known as Gen Y[1]—who have earned the distinction in countless studies as one of the most fickle generations of consumers, have the highest level of satisfaction among the generational groups for both business travel (834) and leisure/personal travel (809). Millennials are the second largest group of renters overall (34%), behind Boomers (40%), and the second largest proportion of business travelers (39%), behind Gen X (43%). Keeping this audience of Millennial customers happy has become a big priority for rental car companies, since 47% of these young renters post reviews online vs. just 27% of Gen Xers and 10% of Boomers.

"Conventional wisdom says that Millennials are perpetually dissatisfied, but that clearly is not the case," said Rick Garlick, global travel and hospitality practice lead at J.D. Power. "Younger consumers are often more difficult to please, but as they get older—whether it's because of maturity, experience, more income or all three—their satisfaction across many studies improves. We definitely see differences in the satisfaction of Gen Y consumers now that many are in their mid- to late 20s and 30s, compared with when they were in their late teens and early 20s."

Following are some of the key findings in this year's study:

• Millennials Make Big Impact: In addition to being the most satisfied generation in the study, Millennial customers are the most likely to share their experiences via the Internet. Millennials who are delighted with their rental car experience (providing a rating of 10 on a 10-point scale) make an average of 5.83 positive recommendations; yet when they're disappointed (5 or lower), they make an average of only 1.46 negative comments about their experience.

• The Shuttle Bus Is Vital Component of Customer Experience: The greatest gains in satisfaction in this year's study are realized in the shuttle bus/van (+37 points), cost & fees (+29) and pick-up process (+26) factors.

• Charting the Impact of Problems: The study finds that 14% of customers have a problem during their rental car experience, up 1 percentage point from 2014. The most frequent problems are with the vehicle functionality, such as a dead battery or poor alignment, vehicle upkeep, pick-up process, staff service and billing. Overall satisfaction drops 93 points to 717 when customers experience a problem, compared with 810 when they don't experience any problems.

Rental Car Satisfaction Rankings
Enterprise ranks highest in satisfaction among rental car companies for the second consecutive year, with a score of 831, a 26-point improvement from 2014. Enterprise performs particularly well in all six factors. National ranks second with a score of 818, followed by Alamo with 807, reflecting 21- and 31-point improvements, respectively, from 2014.