Pete Bigelow
The government agency charged with keeping motorists out of harm's way has long lauded seat belts as "the single most effective way" vehicle occupants can keep themselves safe. For years, it has also opposed efforts to require seat belts on school buses. As contradictions go, that's a doozy.

Mark Rosekind, administrator of the National Highway Traffic Safety Administration, committed this week to doing something about it. He outlined a new policy that makes the agency's position clear: Every child on every school bus should have a three-point seat belt. He's starting a nationwide effort to make that happen.

"Let me clear up any ambiguity now," Rosekind said in prepared remarks. "The position of the National Highway Traffic Safety Administration is that seat belts save lives. That is true whether in a passenger car or in a big yellow bus."

Given that the Centers for Disease Control and NHTSA itself say seat belts are the single most effective way to prevent traffic deaths and injuries – not to mention the agency's persistent public-services messages on the importance of buckling up – that shouldn't come as a surprise. But given its opposition to requiring belts for school buses, the remarks took safety advocates by surprise Monday.


"It should be utterly uncontroversial – there is no question that seat belts offer improved safety." - Mark Rosekind

"It is a very strong statement, by far the strongest statement we've ever gotten out of NHTSA," said Art Yeager, past president of the National Coalition For School Bus Safety, who has tracked the issue for more than four decades. "They've never said anything like it before."

Though Rosekind raised the possibility it could happen in the future, NHTSA stopped short of initiating a rule-making proposal that would mandate belt installation. For now, he said the agency intends to search for new ways to gather school bus safety data and talk with the governors of the six states which require some form of school-bus seat belts to gather information on how to roll out their best practices across the nation.

But he also said that the opposition hasn't been about safety. It's about money. Depending on size, a typical new school bus can cost $75,000 to $85,000 and outfitting a single bus with seat belts can cost between $5,485 and $7,346, according to NHTSA, based on the number of seats and whether a lap belt or shoulder-and-lap belt is ordered.

Manufacturers have argued a design concept known as compartmentalization, which specifies precise spacing between seats and the height of seat backs, has proven effective in keeping children safe and preventing injuries. They've used that in arguments against the added expenses of seat belts. NHTSA released a report in 2002 that praised compartmentalization, and those findings were used in 2007 and 2011 as the basis for rejecting proposed seat-belt requirements. 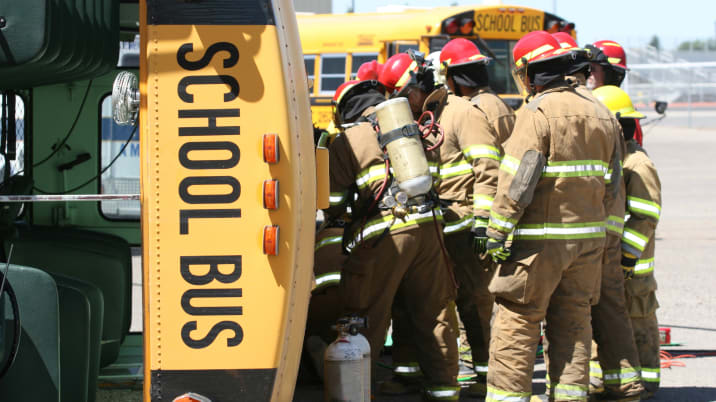 Rosekind acknowledged the new policy broke from these precedents, and said, "ultimately, whenever a safety issue becomes haggling over dollars and cents, safety suffers. This is about children, and we need to focus on them." His remarks came during a speech to the National Association for Pupil Transportation in Richmond, Virginia.

His position on school bus seat belts shouldn't necessarily come as a surprise. He was a member of the National Transportation Safety Board when it issued findings in 2011 that said, "school buses with compartmentalization alone or lap belts are at risk." The remarks came following the investigation of a fatal school bus crash in Chesterfield, New Jersey.


"It is a very strong statement, by far the strongest statement we've ever gotten out of NHTSA." - Art Yeager

School buses already provide the safest form of ground transportation in the country, according to NHTSA statistics. On average, about six children die per year aboard school buses, which account for only 0.2 deaths per 100 million vehicle miles traveled. Children are far more likely to be killed headed to school in vehicle driven by a parent than on a school bus.

There's still room for improvement. Yeager notes the multi-year death toll of children aboard buses is still higher than the eight deaths at the hands of Takata airbags, which have generated Congressional hearings, millions in fines and international attention. He says it's disingenuous that for millions of children, their first unbelted ride in a motor vehicle comes on the first day of kindergarten. "Parents always call us concerned on those first days of the school year," he said. "And really, school buses should have seat belts. Where's the disagreement, except in the industry?"

"School buses should have seat belts. Period. It should be utterly uncontroversial – there is no question that seat belts offer improved safety," he said. "Seat belts will save the lives of children who we might otherwise lose in crashes. ... And yet for years, decades even, the conversation about school bus safety has gone right past what ought to happen and straight to all the reasons it can't happen. For NHTSA, and I hope all of you, that ends today."