Pete Bigelow
As investigators searched for clues about why certain airbags showered motorists with deadly amounts of metal fragments, the company that made the defective devices thwarted their queries.

The conduct stalled the race to find a fix for roughly 19 million flawed airbags and drew a sharp rebuke Tuesday, when federal officials slapped Takata with unprecedented penalties and took new steps to protect millions of Americans who are still driving around with dangerous airbags installed in their cars.

Government officials issued two orders Tuesday, one of which could result in the largest civil penalty ever levied. Foxx announced a $70 million fine for the company, an amount that could grow to $200 million should certain conditions not be met. If the fine reaches $200 million, it would be the largest fine ever levied, surpassing the $105 million penalty assessed to FCA earlier this year.

For the first time ever, the National Highway Traffic Safety Administration exercised its authority to mandate an accelerated timeline for recall repairs. Officials outlined a plan to fix the remaining cars by 2019, an estimated two years earlier than would have been expected had regulators not gotten involved.


"Nobody deserves to have an exploding airbag installed in their vehicle."

"This has been a mess," Foxx said. Later, he continued, "We shouldn't be here. American drivers shouldn't have to worry that a device designed to save their lives might take it. Delay, misdirection and refusal to acknowledge the truth allowed a serious problem to become a massive crisis."

Eight U.S. motorists have been killed, often in otherwise minor collisions, by the jagged shrapnel that spews from the airbags. Nearly 100 more have been injured. Takata's knowledge of the defects stretches back at least until 2004, and the DOT said Tuesday that Takata's pattern of misdirection and deception occurred at least from 2009 and has continued through its current investigation. The u nraveling of the airbag's deadly secrets goes back more than a decade.

Foxx, pictured on the right below, said Takata has fired employees as a result of how the airbag problems were handled, but it was not immediately known how many employees were dismissed or what positions they held. Takata did not address that aspect of the DOT's announcement. In a written statement, in which Shigehisa Takada, chairman and CEO of the company, said, "This settlement is an important step forward for Takata that will enable us to focus on rebuilding the trust of automakers, regulators and the driving public." 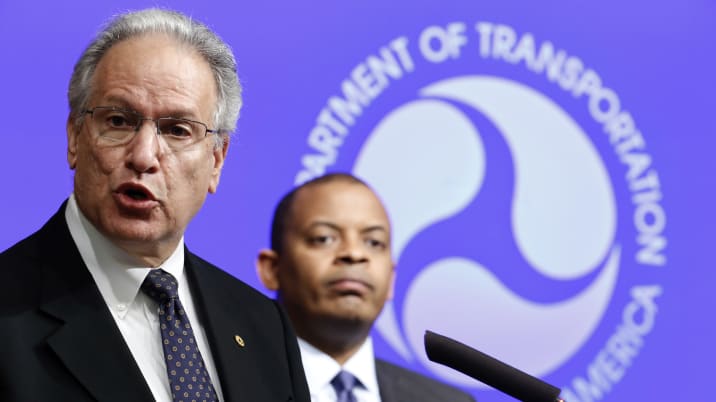 That may be too little, too late. Honda, the automaker hit hardest by the airbag problems, said Tuesday it would no longer use products made by the company in models currently under development, according to the Detroit News.

NHTSA will appoint an independent monitor to evaluate Takata's conduct for the next five years, and authorities will require the company, which has its U.S. operations based in Auburn Hills, Michigan, to phase out production of airbag inflators that use ammonium nitrate as their propellant.


"Delay, misdirection and refusal to acknowledge the truth allowed a serious problem to become a massive crisis."

But regulators warned the number of cars under recall will grow. Currently, 12 automakers have recalled vehicles that used the defective airbags, and all airbags that contain ammonium nitrate inflators will now be recalled. The cause of the defects has been under investigation for years. No conclusive evidence has been found by Takata, automaker or government testing that would suggest ammonium nitrate is the primary cause of the explosions.

Still, NHTSA said it was "a factor" and had enough concern over the ammonium nitrate inflators to warrant its prohibition. "We have enough suspicion about this substance to believe there is significant risk to consumers," Foxx said. "So unless we can prove it is safe, we will not see it in the future."

Of the 19 million cars that need to be fixed, NHTSA said they will be given priority for repairs based on their risk, which will be determined by a number of factors, including whether the cars have been driven in high-humidity states and the age of the inflators. Cars will be divided into four categories based on their risk, and different deadlines have been set for remedies to be in place. NHTSA anticipates cars in the three highest-risk categories will be repaired by December 2016.

"Nobody deserves to have an exploding airbag installed in their vehicle," said NHTSA administrator Mark Rosekind. "The risk from these defective inflators is significant to you and your families. So please take action."