It's absolutely no surprise that General Motors has a thing for LG Corp. The Detroit automaker and the Korean parts supplier have been working in public on electric vehicles ever since it was announced that LG Chem would supply the battery cells for the Chevy Volt in 2009. LG Chem was even named GM's 2010 Supplier of the Year. But, yesterday, the connection between the two companies was strengthened with the announcement that LG Electronics would be supplying a number of components for the upcoming Chevy Bolt electric vehicle. The Bolt is expected to be able to go about 200 miles and will carry a price tag of about $30,000 (after incentives) when it arrives in 2017 or so.

LG's new components can be found almost everywhere in the Bolt. They include the battery pack and the battery heater, a new motor, the power inverter module, the electric climate control system compressor, the on-board charger, high-power distribution module, the accessory power module, and power line communication module. Oh, and then there are LG Electronics' advanced display technologies like the new instrument cluster and a new infotainment cluster. LG Electronics also supplies parts for the 4G LTE OnStar system, just like it does in other new Chevys. If that all sounds like a lot of components to you, you're right. Mark Reuss, GM executive vice president of global product development, purchasing and supply chain, said that without the expanded relationship with LG, GM would not be able to bring the Bolt to market (insert old ironic quote link here).

"I think GM was lacking that [electrification knowledge] in a very complete way for many years, I'll just be frank about that," Reuss said. "I also think that on an electrified basis, this requires a long-term commitment and trust that sometimes is violated on a more short-term, regular, traditional basis. I think we have found something completely different with LG and I think that has become a widely talked about and duplicated want from our purchasing and corporate standpoint with our supply base." 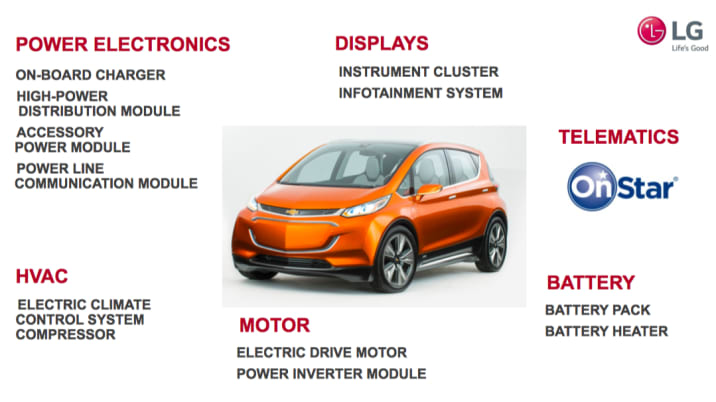 The "this" that Reuss is talking about here is the OEM-supplier relationship, something has evolved with the LG-GM situation. Previously, the automaker-supplier relationship used to be more like a dictator telling underlings what he needed, Reuss said, and that was a bad idea. "Today's competitive landscape requires a different approach, especially in electrified vehicles," he said. Working on the two generations of the Volt and now the Bolt, GM and LG have developed "a true collaborative effort," and now, "they are truly helping us get to the promised land on batteries and battery electric vehicles," Reuss said. He added that without such a long-term relationship, he's not sure if the Bolt project would have happened. Ken Chang, vice president of vehicle components at LG Electronics, said that the new relationship was, "a big lift for LG Corp."

GM is still holding many of the Bolt's technical details close to its chest. Pamela Fletcher, GM's executive chief engineer of electrified vehicles, would not give out any range estimates or power figures for the Bolt that GM and LG Chem are going to deliver, other than that the production car is as "equally intriguing" as the concept and that the companies are, "bullish on range."

UPDATE: This post has been updated to differentiate between LG Group, LG Chem and LG Electronics.

Engineers from GM and LG Electronics Partner on Critical Components

DETROIT, Oct. 20, 2015 — General Motors set aside traditional vehicle development in selecting LG Electronics as its partner in developing the next generation Chevrolet Bolt EV (electric vehicle), which can travel more than 200 miles on a single electric charge.

Following joint planning and research, GM and LG brought the Chevrolet Bolt EV to reality. The Bolt EV concept was shown at the North American International Auto Show in January this year. Chevrolet confirmed in February that the Bolt EV would go into production at GM's Orion Township, Michigan (USA) assembly plant in late 2016.

GM & LG Blend Expertise
Engineers considered different vehicle architectures, electric driving ranges and performance options for the Bolt EV before deciding the vehicle must be affordable and deliver 200-plus miles of all-electric driving with spirited performance. LG supplied an array of new components and systems for the Chevrolet Bolt EV, including:

"Chevrolet needs to be disruptive in order to maintain our leadership position in electrification," said Mark Reuss, GM executive vice president of Global Product Development, Purchasing and Supply Chain. "By taking the best of our in-house engineering prowess established with the Chevrolet Volt and Spark EV, and combining the experience of the LG Group, we're able to transform the concept of the industry's first long range, affordable EV into reality."

"Being selected as GM's EV technology partner positions LG as a key player in next-generation vehicular technologies," said Woo-jong Lee, president and CEO of the LG Electronics Vehicle Components Company. "The opportunity to work with GM on such game-changing technology is indicative of exactly the type of contributions that traditional tech companies can make in the automotive space."

GM-LG Longstanding Relationship
GM's relationship with LG began in 2007 when LG Electronics was tasked with supplying the vehicle communications module for OnStar, GM's exclusive telematics system. Another LG-owned company, LG Chem, and GM have a long-standing relationship: the company was chosen as the sole supplier of battery cells for the first-generation Chevrolet Volt, which launched in 2010.

After delivering exceptional quality for the more than 23 million cells with less than two problems per million cells produced for the first-generation Chevrolet Volt, GM turned to the LG Corp. to bring forward new expertise from LG Electronics and other LG companies. The agreements encompassed supplying components for the Bolt EV and marked the first time that GM integrated a full EV component supplier so early in vehicle development.