Can't accept autonomous liability? Get out of the game, says Volvo Volvo chief executive officer and president Håkan Samuelsson says one of the most vexing challenges facing the auto industry can be solved with a simple statement: Manufacturers should be held responsible if their autonomous technology causes car accidents. Two days after the Swedish automaker pledged to be "fully liable" for accidents caused by its self-driving technology, Samuelsson pushed the entire industry to follow Volvo's lead.

"We are the suppliers of this technology and we are liable for everything the car is doing in autonomous mode," he said Thursday during an appearance in Washington DC. "If you are not ready to make such a statement, you shouldn't try to develop an autonomous system."

Google and Mercedes-Benz have made similar pledges, but it's not yet clear whether other automakers will follow. A spokesperson for the Auto Alliance, an industry trade group representing major OEMs says the organization has no position on whether the industry should be held liable.


"If you are not ready to make such a statement, you shouldn't try to develop an autonomous system."

But in the span of a few short days, the series of announcements from Volvo, Google, and Mercedes-Benz set a substantial precedent. Even though self-driving cars aren't yet on sale, the industry has been mulling questions over autonomous liability for some time, and no clear answers had emerged. Samuelsson said further inaction would hinder progress on commercial implementation of autonomobiles and stumped for federal guidance and regulation that would ready roads for deployment.

Details of Volvo's liability pledge are still being discussed, but the CEO said his plan was ultimately a simple one. Volvo would accept liability for all crashes caused by the self-driving technology. It would not include coverage for incidents that occurred when autonomous-capable cars were under human control, nor would it cover instances when a car operated in autonomous mode could not avoid the reckless actions of another vehicle.

"If the system is causing an accident or over-speeding because it didn't read a sign in the right way, that is what I mean," he said. "That is what should be included."

Signs might not even be needed in an autonomous future, a possibility raised during a panel discussion at the House of Sweden, where Samuelsson made the announcement. If that prospect struck some in the transportation community as far-fetched, it struck others as obvious, just as the notion that automakers should be held responsible for their products did.

"Why would Volvo accept liability for autonomous vehicles?" asked Alain Kornhauser, faculty chair of Princeton's Autonomous Vehicles Engineering program. "Because they know it's not going to cost them anything. They're going to make it safe. They're going to sell these suckers and make money off it, and insurance companies that see that will get rich off that." 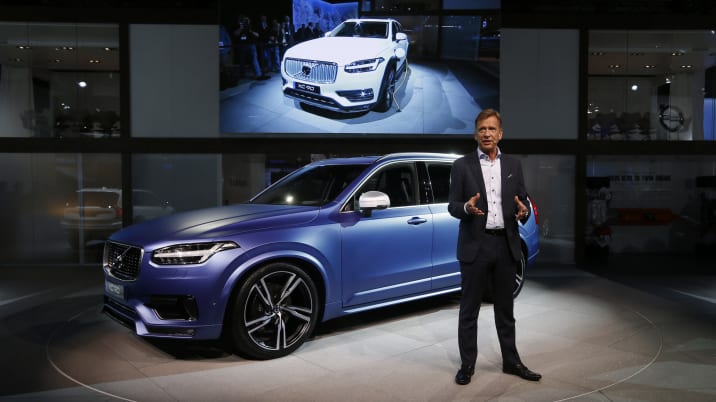 More than 32,000 people are killed and 400,000 injured in car crashes every year in the United States. Automakers haven't said their autonomous technology will be perfect, but with human error responsible for 94 percent of accidents, they believe they can sharply improve on that toll. Embracing the liability may be a signal the technology is nearing readiness for deployment.

"Any corporation putting its name on something that will be driven without a driver is going to do that," said Ron Medford, director of safety for Google's self-driving car project. "Regulation is fine, and we support efforts being made to make sure the vehicle is safe. But the primary responsibility will be with the manufacturer, because it has to be."


"The primary responsibility will be with the manufacturer, because it has to be."

Another sign autonomous deployment may be nearing: After testing cars on public roads for six years, Google recently hired auto-industry veteran John Krafcik as the first CEO of its self-driving car program. While technology may be ready, public policy still needs development and refinement. Samuelsson, pictured above, pressed both the industry and federal government to find ways to ensure laws and regulations are adopted and consistent across the United States. In Europe, he said a patchwork of varying laws may hamper the sale and functionality of autonomous vehicles crossing from one jurisdiction into the other. He said the US could adopt a lead role by avoiding such confusion here.

National Highway Traffic Safety Administration officials say they're researching ways to create uniform testing practices and have initiated the process of rule-making for vehicle-to-vehicle communications, which could affect how self-driving cars interact in a broader traffic environment. The irony of an automaker calling for regulations and standards, which are often loathed by industry insiders, wasn't lost on NHTSA administrator Mark Rosekind.

"From where I sit, you can have all kinds of strong voices literally yelling at us – 'Don't regulate, you'll constrain innovation!' – and at the same time, President Samuelsson is saying you need some consistency across the board," he said.