Sebastian Blanco
The big automotive news today was the US federal allegations that VW quietly and illegally installed software on approximately 482,000 diesel vehicles sold in the United States so that they would not return substandard results on government emissions tests. To say the least, this is potentially a very big deal. You can read the details of the government's allegations here.


The problem seems to be with the NOx trap.

Sam Abuelsamid, a former AutoblogGreen editor who is now a senior research analyst at Navigant Research's Transportation Efficiencies program, told me that there were some hints that VW's diesel emissions strategy had issues a while back. The vehicles affected by today's announcement are all equipped with the 2-liter, 4-cylinder TDI, he said. They all have the lean NOx (nitrogen oxides) trap, whereas all other current modern diesels use urea to treat NOx emissions. "When VW launched those vehicles, I went to the TDI launch program in Santa Monica and asked them if they were going to put the diesel engine into the Tiguan because that would be an ideal application," he said. "They said no, because it would be too heavy. Turns out, the NOx trap was enough to meet the emissions standards in the smaller cars, but not the Tiguan. That seems to be where the problem is, in the NOx trap. All the other big VW and Audi diesels, they use urea, just like BMW and Mercedes do."

Abuelsamid added that, in California, to do an emissions test, testers don't stick a probe up the exhaust, as you would suspect. Instead, they just do a visual test to make sure nothing was tampered with and then plug a scanner into the OBD-II port to read the codes. The news today basically says that the cars were programmed to send out false codes, giving readings that testers are looking for instead of what's actually going on. "That's the background, as far as I know at this point," he said.


This could be "a black eye on the auto industry." - John O'Dell

Speaking at the AltCar Expo in Santa Monica just hours after the news first broke this morning, Edmunds.com's John O'Dell said the Fed's allegations were "stunning." The idea that VW might have gamed the system, he said, "underscores how important EPA clean air numbers are, that a company would allegedly stoop to this to try and meet them. Obviously, people are paying attention to that sort of thing. If indeed [VW] did what they are accused of doing, it is a black eye on the auto industry." 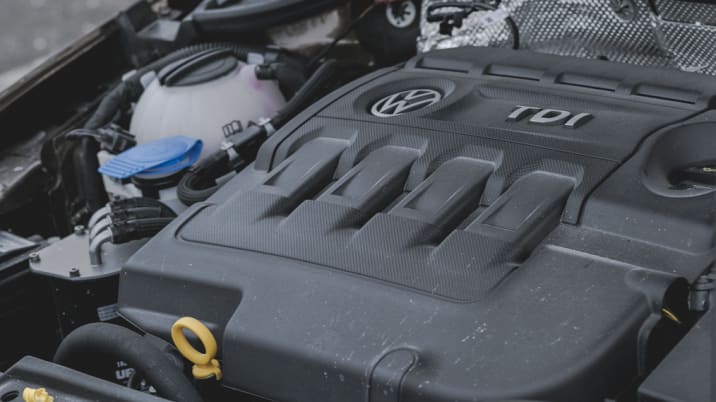 Zach Vlasuk from Kelley Blue Book said that it is "really too early to speculate," but did say that if the early reports of a fine of up to $35,000 per vehicle were to be imposed, that would add up to about $18 billion. That's an amount that could put an auto company in the US out of business, he said, and so, "I don't see that happening." Nonetheless, this, "just goes to show the competitiveness in the auto space when it comes to alt fuels."

It's not just here in Santa Monica that people are taking notice about this story. For example, VW's stock dropped down 3.2 percent today. We asked Wayne Gerdes, a big fan of the Volkswagen Group's TDI engines and the owner of CleanMPG, what he thought about the news and he said that he was disappointed with VW for allowing this to happen in part because it may nullify his latest Guinness World Record, which was set in a 2015 VW Golf TDI. He said that, "the end result will be a cleaner VW/ Audi TDI program going forward, which is good for everyone."


VW is saying these are clean diesels and in reality they're not." - Sam Abuelsamid

Abuelsamid said that the affected vehicles are the best-selling diesel cars on the US market, so this news could potentially have an impact on diesel popularity here. "Hopefully it won't," he said. "It's a unique situation with these specific vehicles and doesn't affect other diesel models." Still, "VW is saying these are clean diesels and in reality they're not."

As for where things go from here, Abuemsamid said there are more questions than answers right now. The biggest question is if VW can even fix the issue with a software update or if it will have to replace the NOx trap with urea injectors, which would be insanely expensive. "I don't know if that's even practical," he said.

All that VW is saying right now is that it is "cooperating fully with the EPA and CARB investigation and has no further comment." We've got Gerdes' full statement below.
Show full PR text
Of course I am disappointed with the VW managers that authorized the OBD-II tampering code inclusion for US-based TDIs. There is already some discussion of my latest 48-state Guinness World Record in the 2015 VW Golf TDI being annulled because of this and nobody worked harder to make that drive a success than I did.

Saying that, the power, torque, and efficiency of diesel still holds just as true today as it did yesterday. The 2013 VW Passat that reached all 48-States at 77.99 mpg, even after what we learned today, was and continues to be 100 percent EPA and CARB emissions compliant. Does anyone know of a large mid-size sedan that can reach every state in the lower 48 over the course of 14-days at that level of efficiency?

Another possible good outcome of the Notice of Violation of the Clean Air Act is that the EPA results for the Monroney were all calculated with the VW TDIs emissions control systems being 100 percent EPA and CARB compliant. If so, there will be no mileage restatements and owners will continue to receive all the benefits that the TDI Turbo Diesel has offered from the first time they drove off the dealership lot to the moment the car is taken to the junk yard decades from now.

NOx reduction via selective catalytic reduction is also just as viable today as it was yesterday. As long as the UREA dosage rates are correct, NOx is all but eliminated during any drive cycle. DEF consumption will surely increase with the new EPA emissions compliant flash – maybe a small drop in power output as well, but I am not sure how deep the OBD-II changes went – but the end result will be a cleaner VW/Audi TDI program going forward, which is good for everyone.

This is most certainly a short-to-intermediate setback for the VW Corporation of America, Audi, and the TDI moniker. However, name a compact through mid-size sedan that offers the ease to drive and massive torque output of a TDI while consuming 20 to 50 percent less fuel over the same distances vs any other non-turbo diesel offering? This has not changed with today's news.
X