Motorweek looks back at the Pontiac Aztek

Chris Bruce
The Pontiac Aztek has earned a position as this generation's ultimate, automotive punchline. Even other execrable models like the Yugo or Mustang II probably get more respect these days just out of their sheer quirkiness, but the Aztek remains a joke. Fortify your mind for what's coming, though, because the much-maligned Pontiac might not be quite so atrocious, at least according to MotorWeek's latest Retro Review video.

MotorWeek calls the Aztek, " GM's first true crossover vehicle," and it's amazing to think of the hated model as a progenitor of one of the most popular segments today. While admitting that the looks are polarizing, John Davis and company actually come away pleased with the Aztek's utility. They praise that there's a ton of room in the back, and the interior is packed with useful features like a removable cooler in the center console and radio controls in a cargo area. The show is even impressed with how the Pontiac drives and throws around accolades like "nimble" and "pleasant."

After seeing the Aztek leading the pack on lists of the worst vehicles of all time for years, listening to it get such effusive praise is actually quite jarring. Could we all be so wrong? No, there's absolutely no debate that this is still a hideous automobile. However, MotorWeek asserts a complete reversal of the generally perceived wisdom about the early CUV. While unexpected, thinking about such an abhorred model in a different way is a cool experience. Check out the video for a different take on the Aztek. 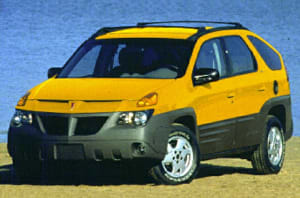