Stretching The Idea Of A Four-Door Sports Car

View All Specs
5 Reviews
Nissan has called the fullsize Maxima sedan a four-door sports car since 1988, with the debut of the third-generation model. What little truth existed in that moniker has slowly ebbed away in the ensuing years, with recent iterations only incrementally more sporting than the rest of the big-car segment. That doesn't change for 2016, despite Nissan's continued use of the "4DSC" trademark. But while the new Maxima may be less four-door sports car, it's much more full-on luxury car.

That fact is best reflected in the eighth-generation Maxima's handsome new cabin. Particularly on the SR and Platinum trims that we drove, the interior is easily the best in its class. We are impressed by the cabin's soft, handsomely stitched leather, genuine Italian-made Alcantara suede, matte wood, and "liquid" metal trim. The seat inserts on our tester features quilted stitching that looks far more suited to Nissan's premium Infiniti brand, while the threads found on the dash and doors look like they're really there to hold things together – a rarity nowadays.

While we question the use of the 4DSC moniker, the layout of the cabin is in line with the Maxima's marketing pitch. The center stack is angled seven degrees towards the driver. Along with the high transmission tunnel, this contributes to the cockpit-like feel of the driver's seat. A fat-rimmed, flat-bottomed steering wheel – a first for Nissan – is amply padded, and on the sporty SR, can be had with contrasting Alcantara accents. The small diameter and SR-specific paddles extend the sports car promise. 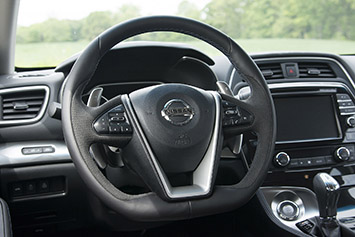 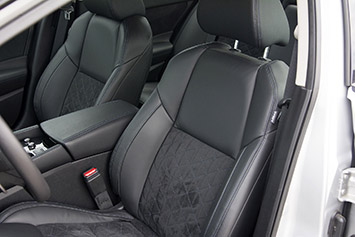 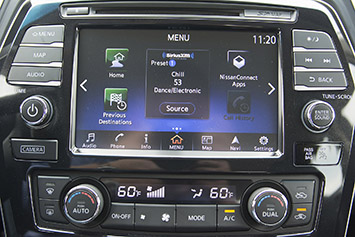 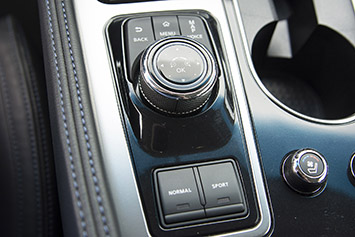 The sculpted, broad-shouldered exterior has the muscle of Nissan's real sports cars, the GT-R and 370Z, but it exceeds both of those in terms of outright attractiveness. Nissan's stylists call the design language "Energetic Flow," but we simply prefer to call the overall look, which borrows heavily from the Sports Sedan Concept, very pretty. If the 2016 Maxima fails to add zest to a staid segment from behind the wheel, at least it brings a serious dose of style to the large sedan clubhouse.

Nissan claims class-leading specifics for the latest version of the VQ35 V6, reinforcing the 4DSC promise. There are 86 horsepower per liter, with 300 ponies in total from the 3.5-liter engine. Sixty-one percent of the parts in the latest-generation VQ35 V6 are new, contributing to the 10-hp bump over last year's sedan. The horsepower peaks high in the rev range, at 6,400 rpm, a mere 200 revs below redline. 261 pound-feet of torque can be summoned at 4,400 rpm, just like last year's model.

This would be problematic if this new engine droned on or thrashed your ears like its predecessors (or its big brother, the VQ37). The new Bose Active Noise Cancellation system drowns out the engine's unpleasant notes, and instead makes sure things sound smooth and refined. The system uses acoustically opposite tones to drown out bad sounds, just like the noise-cancelling headphones you wear on a plane. Sport Mode – perfect if you want a sharper throttle response, more aggressive transmission, and heavier steering – turns up the engine's volume slightly. At normal cruising speeds, the exhaust and intake noises are hardly noticeable. 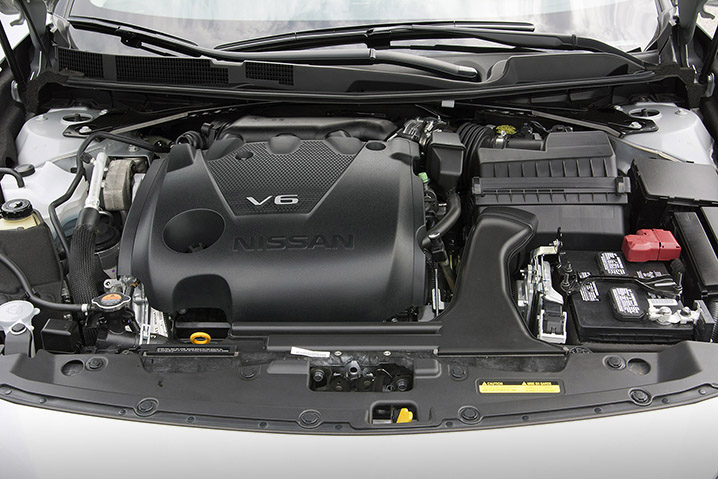 The VQ35 is revvy, too, and isn't bothered by its high power peaks thanks to the generous spread of oomph throughout the rev range. Mid-range grunt is particularly potent, although the most important part of this powertrain is undoubtedly Nissan's latest Xtronic continuously variable transmission. The new CVT uses a wider overall gear ratio than before that covers a similar range as seven- and eight-speed automatics. It's quick to engage and willing to hold a high rpm. The new Adaptive Shift Control monitors G loads in both Sport and Normal modes, and will hold the rpms to deliver more power on corner exit. The CVT will quickly drop revs in response to throttle inputs, too. In normal conditions, its behavior is unobtrusive and relaxed, lacking any of the histrionics that have typified CVTs for so long.

Nissan's body tweaks manage to improve fuel economy measurably by refining the sedan's aerodynamics. The coefficient of drag drops from 0.34 to 0.29 and contributes to Nissan's estimated best-in-class average fuel economy of 25 miles per gallon. Compared to last year's model, the city fuel economy increases from 19 mpg to 22 mpg, while the highway economy climbs from 26 mpg to 30 mpg.

The redesigned Maxima body ups torsional rigidity by 25 percent, while a new rear brace increases lateral stiffness by 27 percent in back. On top of that, Nissan slashed 82 pounds of body fat, giving the big sedan a better power-to-weight ratio than the smaller BMW 328i and the V6-powered Acura TLX. All told, the 2016 Maxima weighs anywhere from 3,471 pounds for the base S, to 3,564 pounds for the sporty SR, to 3,593 pounds for the top-of-the-line Platinum. 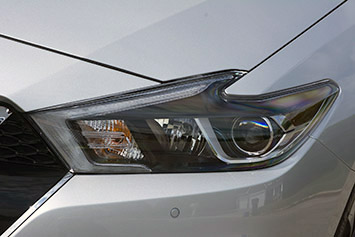 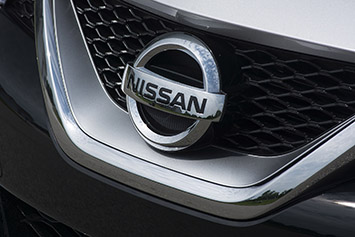 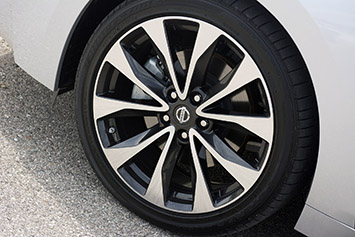 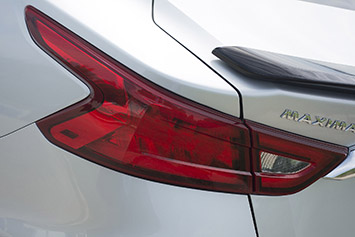 Combined with monotube dampers, yet another first for the Maxima, and an Active Ride Control – the system uses light brake inputs to balance the chassis over bumps and imperfections – Maxima drivers will enjoy a significantly more refined ride. The SR is comfortable and composed, displaying a relaxed primary ride and smooth secondary ride, despite its 19-inch alloys and 40-series rubber. The luxurious Platinum and its 45-series, 18-inch wheels is even better.

The SR, with its more aggressive dampers, springs, and sway bars, is both sharp and agile despite its size. Cornering, even at high speeds and around sharp turns, is flat and progressive while general body motions are very well managed. The Maxima reacts pleasantly to sudden steering inputs – turn-in is particularly sharp – as are brake and accelerator inputs.

Why, then, are we so loathe to call this a four-door sports car? It's quick and agile, right? And the new Maxima looks muscular and aggressive. But what makes a sports car a sports car, whether it's a low-powered roadster or any of the high-performance sedans on the market, is the ability to deliver feedback through both the steering and the chassis.

Although the Maxima's steering is fast, precise, and enjoyable for an electric rack, it just won't talk to the driver. The vibrations and sensations that allow us to predict how the front tires will react to inputs aren't clear enough. It's the same with the chassis, which is so well isolated that you can't easily interpret body motions through the comfortable driver's seat. In particular, there's a lack of feel from the front end around high-speed bends. 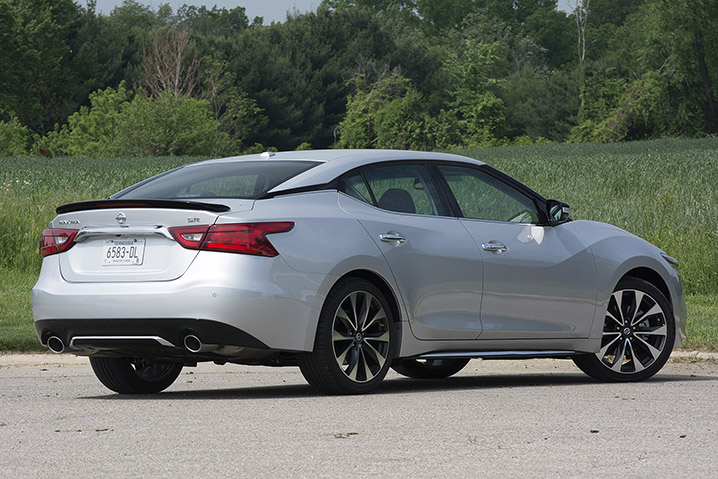 But this is a minor fly in the ointment, especially as we doubt most customers will push their Maximas hard enough to notice such behavior. For the average Joe that heads down to their local dealership, we predict they'll walk away impressed by the blend of sharp handling and a composed ride.

The reasonable price won't hurt, either. Nissan tweaked its sales strategy for the 2016 Maxima, doing away with packages and optional extras. Instead, there are five grades to choose from, ranging from the base S ($32,410), to the value-oriented SV ($34,390), the volume SL ($36,890), the sporty SR ($37,670), and the luxurious Platinum ($39,860). Our silver SR tester, shown above, adds one dealer-installed accessory, with the black decklid spoiler, a $ 430 option. With the $825 destination charge, we get an as-tested price of $38,925. That price is a real bargain, considering the SR has everything from climate-controlled leather seats, to adaptive cruise control, predictive forward collision warning, a Bose stereo, a heated steering wheel, and model-specific items like 19-inch wheels, the sport-tuned suspension, and the premium interior with Alcantara inserts.

So no, the eighth-generation Maxima is not a "four-door sports car." We doubt the people that buy it will really care, though, because what they're getting is a refined, comfortable, and content-filled four-door sedan. Nissan's target for the Maxima is not only traditional big cars like the Chrysler 300 and Ford Taurus, but smaller, sportier entries like the Audi A4 and BMW 3 Series. The big boys should be scared. The Maxima is a tour de force of style and content the likes of which the domestics are simply unable to match. But against the Germans, the Maxima lacks that tactile, visceral character that makes driving truly fun. Until Nissan can capture that, the Maxima will continue on as a sporty sedan, rather than a true sports sedan. 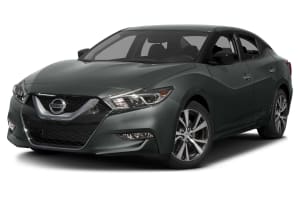