2015 Volkswagen GTI: Driving into spring with just one regret [w/video]

As Winter Turns To Spring, Our GTI Love Grows Stronger

View All Specs
If you only notice one thing in the video above, it should be this: that GTI is filthy. Yes, the grossness of winter took its toll on our long-term 2015 Volkswagen GTI, covering the Carbon Steel hatch in a mess of salt-and-slush-streaked grime.

The GTI was a champ during the cold months With 225/40R18 Bridgestone Blizzak winter tires offering sure-footed grip, the hatch became a dear companion to editors slogging through unsavory weather. Front-wheel-drive cars are already pretty solid for wintertime driving, and with the added traction of these tires, the GTI plowed forward without any drama.

Our biggest gripe about snowy driving involved the car's Driver Assistance Package – a $695 option that, knowing what we know now, we wouldn't have ordered. First, this option positions the front camera right in the middle of the lower grille, which looks pretty terrible. But more importantly, the system can't tell the difference between slush/snow and an actual obstacle, so it constantly feels the need to warn us that we might hit something when the camera is covered in grime. Clearing the camera off isn't a problem, but the practice grew more annoying as the season continued.

The Driver Assistance Package gets you front and rear parking sensors that, honestly, we find to be a bit too sensitive. It's activated in any low-speed situation, so the car freaks out whenever you take it through a car wash, and beeps if you walk up to the rear (to, say, open the hatch) while the engine is running. And because the GTI S model doesn't get you a rear-view camera, there's no real added benefit to the noise-makers. Yes, they help while parking in tight places, but if you struggle to park a vehicle the size of a Golf with its already excellent sight lines, you've got larger problems to overcome.

We have other issues with the system, too – like how the forward sensors will blink in the instrument panel to tell you you're too close to the vehicle in front of you on the road, even with a four-car-length separation between vehicles. In all, these issues just don't seem to outweigh the benefits of the safety system. To us, it's not $695 well spent. 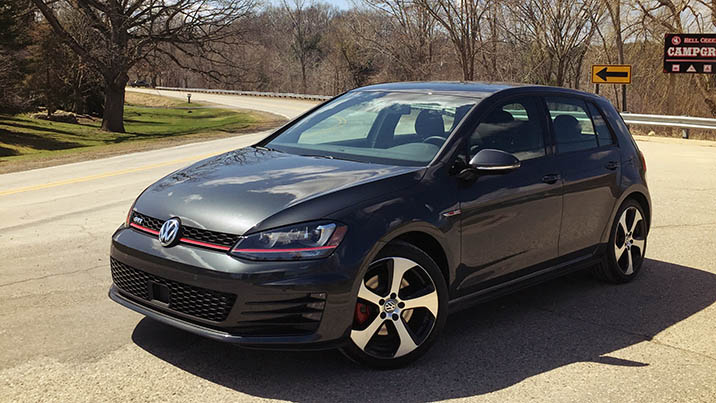 But enough complaining. Really, the Driver Assistance Package has been the only issue we've had with the GTI since its arrival in January. Now that winter has finally melted away, we've enjoyed nice, warm temperatures here in Detroit – just last week, we were took the winter tires off.

There hasn't been any noticeable difference in ride quality since putting the Bridgestone Potenza summer tires back on the GTI. Instead, the benefits have been grip on warm, dry pavement, something we experienced recently on a long, vigorous drive on some of our favorite backroads northwest of Detroit.

Thanks to the trick XDS cross-differential up front, the GTI is less prone to understeer during hard cornering. On one tight, 90-degree left-hander, where older versions of the GTI showed their nose-heavy, understeering tendencies, our long-termer clawed into the pavement and changed direction with a quickness. Combined with sharper steering and lighter weight, this makes the GTI feel less like the porker it used to, instead offering precise, nimble hot hatch thrills. We can't wait to get it back out onto better roads (and a track) during the summer months.

We've long said that the GTI strikes perhaps the best balance between everyday drivability and all-out performance car thrills; that's one of the reasons why the car is a hot commodity in the Autoblog Garage. Someone's always eager to grab the switchblade GTI key for the weekend.

Our little hot hatch has proven itself frugal and functional during its first couple of months in the test fleet, as well. The hatchback configuration with fold-flat seats has been great for hauling dogs, bikes, tires, and IKEA loads, and the cloth (plaid!) seats are easy to clean, on top of being super comfortable. We'll admit to driving the GTI aggressively most of the time (it's hard not to, when it's this good), but even so, fuel economy hasn't been terrible. Volkswagen estimates the car will return 25 miles per gallon in the city and 34 mpg highway. We're currently averaging 27.2 mpg, with just under 4,000 miles recorded, but some editors have seen numbers in the low-30-mpg range on longer trips. We'll let the engine break in a bit more, and maybe ease off the throttle, to see if we can improve our average.

For now, life with the GTI is fine and dandy, aside from our forward collision warning gripes. Keep it up, little guy – we've got a lot more planned over the next nine months.