Traffic Deaths Are Down In The City, But Safety Plan Draws Criticisms

Pete Bigelow
Two teenage girls received what they considered insults in addition to injuries after being struck by a car earlier this month in New York City, while trying to cross a busy street. Less than an hour after the accident, Brooklyn police officers delivered jaywalking citations to the 16-year-olds as they lay in hospital beds and doctors tended to fractures and bruises.

"There were doctors all over her, giving her IVs and this and that," Reginald Moise, the father of one of the victims, told the New York Post. "I was very upset. I told him it was stupid and I didn't understand. He told me, 'That's Mayor de Blasio's no-tolerance policy.'"

New York police officers quadrupled the number of jaywalking citations they wrote between 2013 and 2014 as part of the city's ambitious plans to eradicate traffic deaths within its borders by 2024. Approximately 2,000 were issued last year, according to city records. Increased enforcement is one of the lynchpins of the plan, called Vision Zero and modeled after a Swedish strategy to end traffic deaths with a comprehensive overhaul of traffic laws, road design, education and, yes, stricter rules.

New York, which will host a traffic-safety symposium as part of its annual auto-show festivities this week, is more prone than most places to pedestrian deaths. Although they comprise only 14 percent of all traffic fatalities nationwide, pedestrians were 58 percent of NYC's death toll between 2011 and 2013, according to city records. Last year, pedestrians accounted for 144 of 269 traffic fatalities, according to a public-radio project called " Mean Streets," which tracked deaths in the city.

That is still a decrease from the 180 pedestrians who were among 293 total traffic deaths the prior year, and city officials are quick to credit early Vision Zero developments as a force behind the decline. 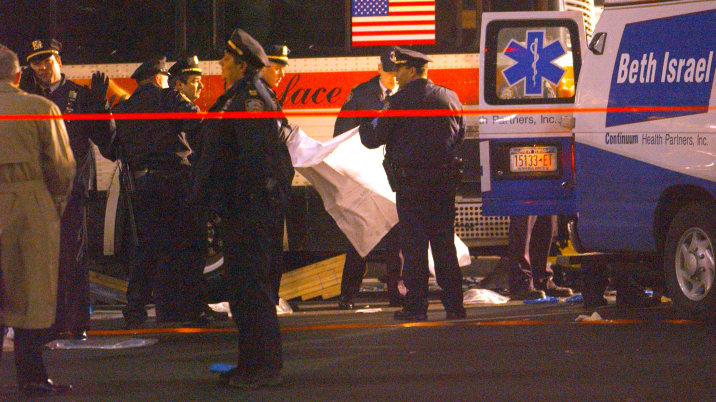 But as the city's efforts to ramp up enforcement accelerate, some critics fear poor and minority residents will bear the brunt of the crackdown. With the recent experience of the Brooklyn girls fresh in their minds, they worry about penalizing the people who comprise the majority of victims: pedestrians.

"That needs to be a concern, that this doesn't fall on the backs of the most vulnerable New Yorkers," said Keegan Stephan, an organizer with the nonprofit Right Of Way, which advocates for pedestrian and bicyclist rights on New York roads. "The NYPD tends to do what is easiest, and it's easiest to go out there and go to a light and ticket a bunch of people for jaywalking. It's harder for them to crack down on real, dangerous behavior: ticketing drivers that fail to yield or aggressively edge through the crosswalks."

It's not the first time that bicyclists and pedestrians have complained they're unfairly targeted by police officers who are often navigating the front lines of a clash between entrenched car culture and a new generation of road users. In Los Angeles, authorities handed out $197 jaywalking tickets to pedestrians who were slow to cross streets – even when they still had time remaining on traffic-light displays.

While the scope of enforcement and dollar figure attached to penalties is questionable, Jonathan Adkins, executive director of the Governors Highway Safety Association, says the citations are ultimately necessary to modify risky behavior. "If the public doesn't think there's a consequence, they won't change their behavior," he said. "We've seen that before with other things like seat belts and speeding. It's the fear of enforcement. It's part of the solution. When you talk about ending traffic deaths and Vision Zero, it's not just a touchy-feely philosophy that if we wish for it enough, it will happen. Enforcement is important." 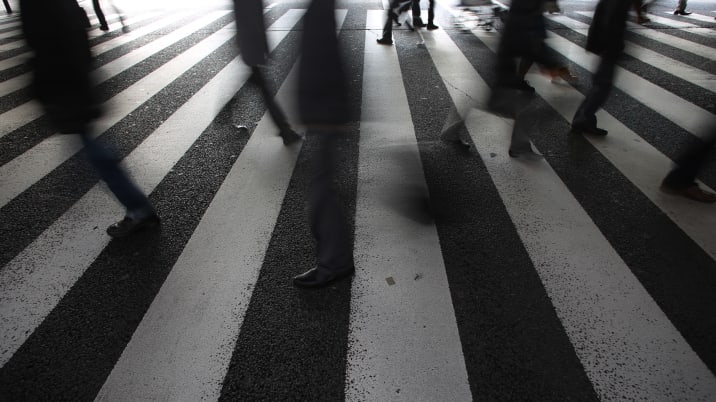 Jaywalking citations aren't the only part of New York's Vision Zero plan met with resistance. Traffic safety rarely makes for compelling political fodder, but Mayor Bill de Blasio framed the needless deaths and injuries in New York as a public-health crisis during his campaign and made eliminating them a central tenet of his campaign. Upon taking office in January 2014, he began delivering sweeping changes.

In June, de Blasio signed 11 traffic-safety bills that enhanced traffic data collection, updated the city's legal code and outlined engineering safety commitments. Automated speed cameras have been installed in school zones in the city and bike lanes have been constructed, and in October, he signed legislation that reduced the city's speed limit from 30 to 25 miles per hour, unless otherwise posted.

The reduction bucked a nationwide trend toward increased speed limits, especially on highways. Adkins thinks that may be the biggest step New York has taken to curb fatalities. "One of the big ways to change that is to change our cultural thought about speed," he said. "We never think of speed like we do drunk driving, but speed is still [a factor in] a third of all deaths, 10,000 to 13,000 speed-related deaths per year. We've made a lot of progress in vehicles and roads, but the laws of physics haven't changed."

If reducing speed seems like a sure-thing win for de Blasio, one of his other Vision Zero efforts is perhaps less complete. Chief among his accomplishments in 2014 was the passage of a code that elevates the punishment for a driver that strikes a pedestrian who has the right of way from a traffic violation to a misdemeanor. It also applies a flat $250 fine for any drivers who fail to yield.

Officials thought the revisions, known in New York as Section 19-190, would provide sufficient punishment for drivers who hurt pedestrians. In practice, it hasn't been enforced by police officers and prosecutors as much as safety advocates had hoped. It's been used two dozen times since it took effect in August 2014, and the charges have come from a police unit of collision investigators, not everyday officers working a traffic beat.

"We think it could be effective far beyond the specific instances of accident investigation," said Steven Vaccaro," a New York lawyer who specializes in representing crash victims. "We're certainly glad it's been used in those cases, but it should apply to a much broader range of cases."

Without district attorneys using the law to prosecute lawyers whose conduct rises to blame-worthy, status, Stephan and Vaccaro both say there's not a deterrent for getting drivers to slow down.

In February, a city bus driver was arrested after striking a 15-year-old girl who had the right of way in a crosswalk, and charged with failing to exercise due care. Union officials who represented the driver were so angered by the criminal charges, they told The New York Daily News they are mulling a work slowdown or stoppage.

Anecdotally, city buses are involved in many of the pedestrian deaths and injuries that fill New York accident reports. But the fact drivers and their union reps are leading a backlash against the provision speaks to how difficult it is to change the driving culture in the city, according to Vaccaro.

"We think the job of bus drivers is being safe and not hitting people -- that's part of the job," he said. But overall, "this is just like in the 1970s when there was a decision made by the survivors of drunk-driving crashes that we're going to criminalize this behavior and change the cultural norms that protected drunk drivers. We're at the leading edge of a similar movement."

No case illustrates the frustration and anguish many New Yorkers have regarding the lack of consequences for drivers who kill or maim pedestrians than the one involving Allison Liao, a three-year-old girl who was run over while walking within a crosswalk and holding the right of way. Despite early police reports to the contrary, she was holding her grandmother's hand when an SUV driven by 44-year-old Ahmad Abu-Zayedeha failed to yield and plowed into the two. Though the accident occurred October 6, 2013, before the upgraded code went into effect, prosecutors didn't even use the existing laws at their disposal to punish the driver.

An administrative law judge in New York's Department of Motor Vehicles threw out the tickets issued to Abu-Zayedeha in November 2014. The girl's grieving family had to launch a statewide campaign just to get the driver's license suspended. Earlier this month, the DMV said that Abu-Zayedeha could re-apply for his driver's license after a 30-day suspension.

Liao's death occurred while she and her grandmother crossed Main Street in Queens, a road considered an arterial by city officials. These streets are the vehicular lifeblood of their neighborhoods and city boroughs, built with traffic flow in mind. They're also the most dangerous, as pedestrians can struggle to cross multiple lanes of traffic. City officials have identified 443 miles of arterial corridors that could benefit from safety redesigns, and in 2014, the city counts 27 arterial slow zones and 35 intersections overhauled as some of its top on-the-ground accomplishments.

If that sounds good, Transportation Alternatives, a New York nonprofit that promotes the use of public transportation, bikes and walking, says it's not good enough. While de Blasio ticks off his list of accomplishments, a recent paper published by the group says that the mayor's reconstruction budget is "woefully inadequate" and actually funds traffic-improvement projects at lower rates than before Vision Zero's implementation. At current funding levels, the group says it would take New York City more than 100 years to address the current dangers.

Funding is not the only problem. In some cases, local community boards have fought the city on plans to redesign certain streets and sidewalks. They like the car-centric approach, and that can cause frustrations to mount between these community boards and alternate road users. "The mayor has said this is a public-health crisis," Stephan said. "If he's genuine, then we should address it like a public-health crisis. If the water supply was poisoned, we wouldn't go to a community board and ask them what we should do. We'd do it. We'd consult experts, not amateurs. We need to do the same thing redesigning our streets. Our streets are our water supply of public space."

More than 30 states across the country are working on implementing similar program called Toward Zero Deaths, and Washington D.C. is adopting the full Vision Zero program. As they develop the finer points of their programs, they'd be wise to examine New York, where a noble goal has encountered some unexpected speed bumps.