Pete Bigelow
The first time Qualcomm executives met with their auto-industry counterparts about an experimental technology that could wirelessly charge electric vehicles, they thought it'd be a flop.

Although they liked the technology itself, they doubted whether carmakers would think it was practical. "We had an internal bet going as to when we'd be thrown out of the meeting," the company's vice president of technology, Graeme Davison, said.

But their first meeting with a European OEM went surprisingly well. Then so did the second. In meetings with a dozen different automakers, only one didn't express interest in the technology.

The chargers have been around for a few years and tested in previous trials, but for Qualcomm, the all-electric FIA championship series has served as an advanced testing ground for the technology. As Formula E has crossed the globe for races in China, Malaysia, Uruguay, Argentina and now the US, the company has tested everything from how the magnetics that make the system work affect automotive components to how portable the system is from race to race.

Engineers are studying whether the magnetic fields interfere with other systems and how they interact with different surfaces. The BMW i3 and i8 offered two distinct test vehicles.

Next year, Formula E teams themselves will have the choice to use the technology to power their single-seaters. Regular drivers will have to wait a little bit longer – Qualcomm says the system, called Halo, probably won't reach mainstream drivers for another three to four years.

That's where it's headed. Formula E is an research-and-development lab for the company, one that follows a prior trial partnership with Renault, but the prospect of bringing the wireless chargers to the wider EV market – negligible as it may be today – is where company officials see the greatest promise. As it turned out, they underestimated the extent to which the automakers would want to get rid of the current plug-in system.

"A car is about freedom, about getting in and going, and tethering a vehicle to a wall is exactly what the car companies didn't want," Davison said. "One German executive said to me, 'My biggest fear is a guy walks out of the house in the morning and says, 'the damned car isn't charged.' It's going to be the car company's fault. We don't want the plug-in now, but that's what we've got. If you guys can make this happen, it's exactly what we want.'" 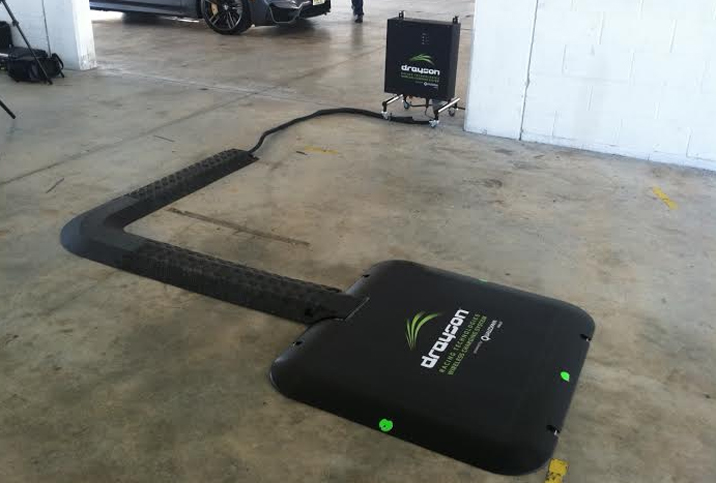 At first blush, it may seem unusual that Qualcomm, a maker of mobile technology for smartphones and tablets, has waded into the realm of the automobile.

But it's been involved in automotive technology for more than a decade. As the industry rushes to embrace connectivity, Qualcomm's embedded modems have been behind the 4G LTE now being pushed into millions of vehicles. Though it's based in San Diego, it symbolizes the convergence of Silicon Valley and Detroit as well as any company.

Davison says getting the technology behind Halo to work is easy. A magnetic field is creating between a charging pad on the ground, which is plugged into a power source, and a mobile pad on the chassis of the car. Inductive coils located in each component exchange energy. When the car pulls over the pad, it authenticates with the ground-based system via a Bluetooth connection and instantly begins charging.

Energy can be transferred to a car with the ground clearance of an SUV, and there's no need to be an accurate driver – as long as a driver doesn't end up on top of a curb, the magnetic system will connect and charge. And the pad is durable. "You could run over it with a truck, and it still works fine," Davison said.

The more difficult part might be standardizing the systems. Qualcomm has developed a 3.3-kilowatt charger for basic home installations, a 6.6-kilowatt system for professional-grade chargers and a 20-kilowatt system for high-performance needs like the cars in Formula E. (The higher the kilowatts, the faster the charging).

A common standard is important because the company foresees a wireless charging system that could grow far beyond an individual charging pad in a garage. Qualcomm believes wireless charging could prove to be an essential part of a vehicle-to-infrastructure traffic system, in which charging pads could be installed within the roadway itself at intersections with traffic lights. Or in a taxi line. Or anywhere vehicles are prone to waiting.

While the wireless chargers should be available to individual drivers within the next vehicle-development cycle, the infrastructure deployment is one that's part of a broader, longer vision. For Davison, that would be worth the wait.

"It's absolutely a long-term game," he said. "It's about building a whole ecosystem. It's the first time anybody has said, this is a big problem, this needs to be broad, and we have to have standards. It's not a two-to-three-year project. There's multiple years of work ahead."