The Middle Child Makes A Name For Itself

View All Specs
Add a Review
We're routinely told that it's not easy being the middle child. The oldest sibling will always outshine the rest, while the youngest is routinely doted upon. The middle child, meanwhile, is seemingly never able to measure up. You know the drill: Marcia, Marcia, Marcia!

But that hasn't really been the case for Ford's mid-kid crossover, the Edge. Sandwiched between its highly successful big brother, the Explorer, and the stylish younger brother, the Escape, the Edge has had plenty of its own bragging rights over the years. It's where the Blue Oval chose to first launch MyFord Touch in 2011, and was one of the company's first applications of an EcoBoost engine in a CUV.

For 2015, Ford has given the Edge a brand-new outfit, complete with stand-out sheetmetal and a revamped 2.0-liter four-cylinder engine fitted with a twin-scroll turbocharger and direct-injection. The result is a vehicle that truly stands out from its compact and fullsize siblings while promising to retain Ford's edge in the midsize CUV market. 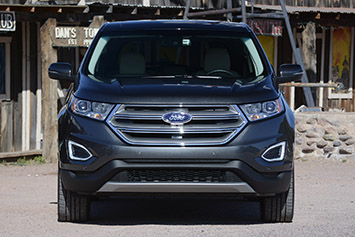 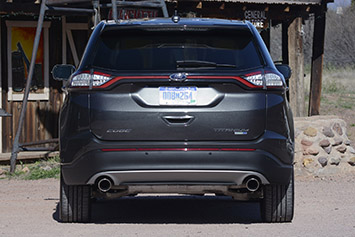 Where many of Ford's cars have opted for a slim, Aston Martin-like grille, the new Edge's face is big and bold. It's around back, however, where the Edge really comes up with its own personality. The slimmer D-pillar forms the edges of a more aggressively raked rear window. It's difficult to spot in pictures, but the result is a decidedly more assertive profile than the outgoing CUV. Beyond that, the rear is home to Fusion-inspired taillights, although unlike Ford's popular midsize sedan, they're joined together by a vehicle-spanning lighting element that prominently features a Ford badge at its center.

Ford's work on the Edge's interior is less progressive, though. The owner of a 2014 model wouldn't feel the least bit out of place climbing behind the wheel of a 2015, as it features Ford's same reconfigurable instrument cluster, and a center stack that's been crowned by the latest ( and final) edition of MyFord Touch. Meanwhile, more JD Power Initial Quality Study-friendly buttons have replaced the obstinate and unintuitive touch-capacitive controls.

The conservative take on the interior design belies the big improvements in material quality. The leather inserts in the doors are more heavily padded and the plastics are far softer. It's a similar story throughout the cabin, where owners will notice softer dash plastics and generally richer materials. That said, Ford (and Lincoln) are developing a disturbing habit of finishing the center stacks of their vehicles in a hard, character-less black plastic. Shown above in the gallery around the HVAC controls, it disrupts what is otherwise a cleanly styled cabin and makes it seem like a total "oops, we forgot this part" afterthought. 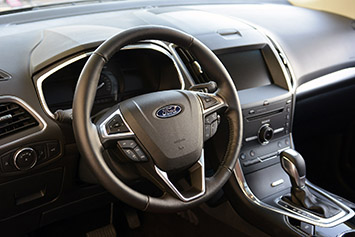 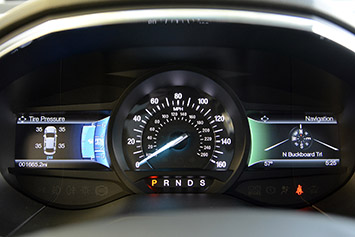 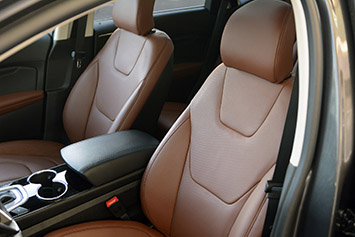 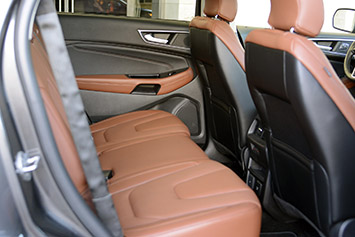 Meanwhile, areas integral to the driving experienced are well addressed. The seats are wide and comfortable on our Titanium-trimmed tester, and they're finished in soft, perforated leather. Support is limited, but these are thrones designed more for the long haul than the lap record. The steering column tilts and telescopes, and there's a large, leather-wrapped wheel. While the diameter is relatively big, it's not a handful – those that are small of hand (roughly 50 percent of the Edges Ford sells are to women, after all) need not be concerned.

One of the more prominent new additions to the Edge is Ford's new Enhanced Active Park Assist system. Though not a totally new idea, it comes with enhanced capabilities in the 2015 Edge. It can now pull out of parallel parking spots, while also backing the vehicle into perpendicular spots. You can check out our test of the perpendicular park assist in the video, below.

While Ford will outfit your Edge with the carryover 3.5-liter V6, we're much more concerned with the standard engine – a new 2.0-liter turbo four that's different than the unit found in the Fusion and Escape. Not only is the Edge the first vehicle in the Ford family to offer EcoBoost power as standard, it is the first vehicle in the brand's US lineup to get the new 2.0T.

While it might not look that different from the current 2.0-liter EcoBoost on paper – it produces 245 horsepower and 275 pound-feet of torque, gains of 5 hp and 5 lb-ft over the outgoing engine – the big story is that consumers can now pair the 2.0T with an all-wheel-drive system that's capable of transferring up to 100 percent of the engine's output to its rear axle as needed. That said, the Edge's 2.0T is not a performer, despite producing more than 120 hp per liter. According to our wristwatch, it takes around ten seconds to hit 60 miles per hour, likely thanks to the crossover's 4,060-pound curb weight. The soft throttle response doesn't help with the lack of off-the-line speed, either.

Slow sprint aside, there's plenty of usable power when you're already on the go. With peak torque at 3,000 rpm, you're rarely far from max twist. Moreover, Ford continues to maintain a firm grasp on turbo lag. That means, especially at speed, it doesn't require a lot of planning to make a pass. The bottom line here? The vast majority of Edge owners should find the 2.0-liter an adequate companion for everyday driving. Those who don't can pay $425 to upgrade to a naturally aspirated, 3.5-liter V6, or they can move up to the Edge Sport with its fancy new twin-turbo, 2.7-liter V6. 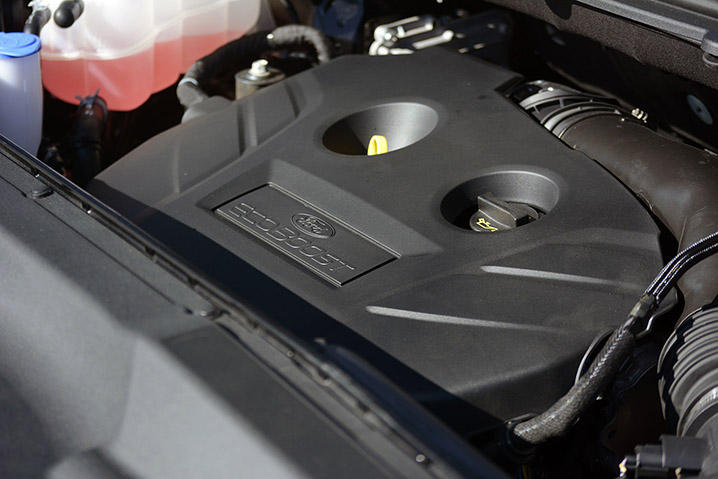 A six-speed SelectShift automatic transmission is tasked with managing power, regardless of engine choice. Fitted with paddle shifters for the first time, as well as a new Sport mode when in full auto, the new gearbox is at least a bit more modern, even if it's only got six cogs. Upshifts are smooth, although you won't confuse the speed with a dual-clutch auto. Snaking through the hills outside Scottsdale, AZ, it's easy to see that this transmission is geared for fuel economy above all. The 6AT is hesitant to downshift, forcing you to really dig into the throttle to demand a gear change, although when it does move down a gear, it does so with quick action. Still, the transmission truly desires to keep you revving low in a high gear, which will leave you flatfooted on steeper inclines.

The manual mode, which requires nothing but a tug of a paddle to activate, mitigates some of these bad behaviors, holding gears as needed. Again, these are the kind of driving conditions we don't expect most customers to encounter – frequent five and six-percent grades aren't too common on America's freeways, after all. We're looking forward to testing the 2.0T on the more level grades around our metro Detroit office, where the gearbox might make a better showing. Things improve immensely upon sliding the gear selector into Sport. Upshifts are a smidge quicker, but on downshifts and inclines, the more aggressive shift mapping is much more noticeable.

The overall ride and handling are improved, meanwhile, thanks to a new body structure that's 26-percent stiffer against bending forces and 14 percent stiffer torsionally. More importantly, though, the trailing-arm rear suspension has been replaced by a new and far more modern, coil-sprung, multi-link independent rear end. The suspension design in front is unchanged with a MacPherson strut setup. All told, the new Edge sees a 20-percent improvement in roll damping and roll stiffness. 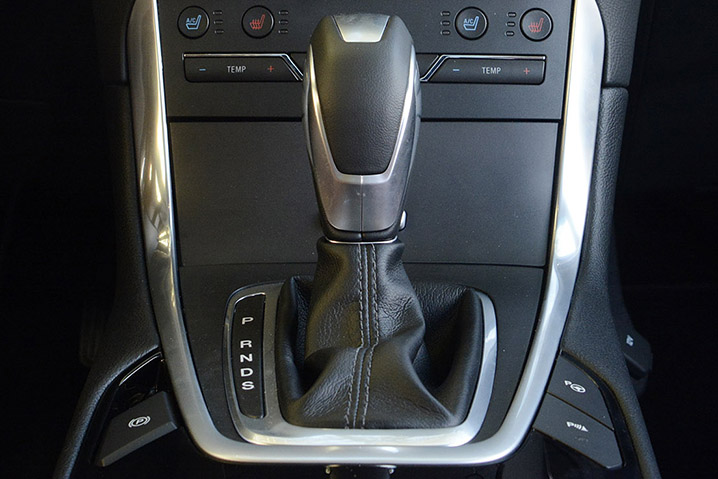 This new Edge feels far more composed in both the way it rides and handles. It's really comfortable – some might even call it luxurious. Vertical motion is nicely controlled, giving the Edge a planted, composed feeling over hilly, undulating terrain. Rough spots are easily dispatched, as the Edge soaks up bumps and blemishes with zero drama.

There's not too much roll, and thanks to the improved damping, it arrives more progressively than last year's model. That said, feedback is extremely limited and there's too much forward dive under hard braking for our tastes.

That limited engagement is also true for the steering. The hydraulic rack has been ditched in favor of a trendy electric power-assisted setup that's both light and particularly numb. It's nicely behaved at higher speeds, though, allowing precise inputs despite the lack of effort. Again, we doubt the majority of customers will find cause to complain.

Importantly, the ride is quiet as well as comfortable. The wheel wells and underbody panels are engineered to prevent noise from entering the cabin, meaning roar from the 245/50R20 Hankook Ventus S1 Noble2 tires and suspension impacts are isolated and unobtrusive. An acoustic windshield and new door linings, meanwhile, manage wind noise. What's more, the Edge features a 360-degree underhood seal, meaning that only the engine's most pleasant notes enter the cabin, even when pushed hard. The result of this work is a smooth, pleasant four-cylinder soundtrack that's backed by not much else. Hell, dig into the Titanium trim's standard 12-speaker Sony stereo, and you'll easily drown out all else. 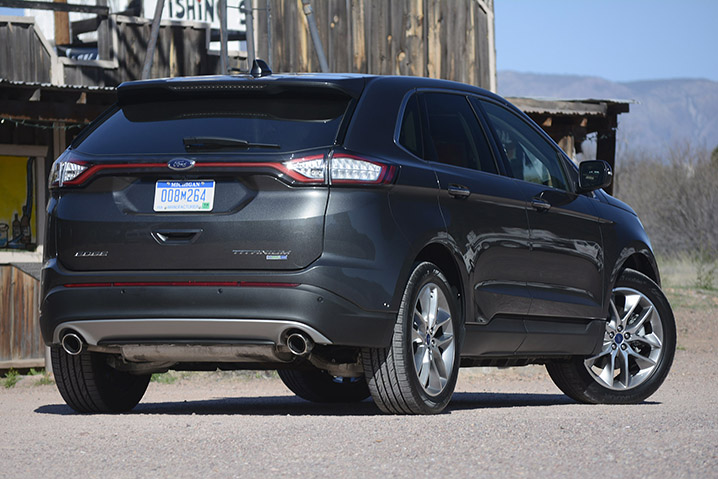 The new Edge strikes us as Ford Motor Company's most premium product not to wear a Lincoln badge. That character, though, comes with a fairly steep price tag – a base Edge SE starts at $28,100. Adding all-wheel drive bumps the price up by $1,495, while moving onto the Titanium trim you see here demands an extra $7,500. To match the vehicle we tested, you'll also want the 302A option pack, which adds $5,645 to the price, while also adding heated and cooled front seats, heated back seats, a heated steering wheel, panoramic sunroof, remote start, a blind-spot monitoring system, Enhanced Active Park Assist, a grille-mounted camera (and the world's most adorable washer nozzle seen in the video, below) and HID headlights. Add another $995 for the 20-inch alloys and you'll match our tester's $44,685 as-tested price, including $895 for destination.

Ford has made a business of using the Edge for conquest sales – 50 percent of the 2014 model's sales came from other brands, including some premium makes. With the 2015 Edge, we don't see there being any trouble continuing that trend. The new CUV is a highly competent, lifestyle-oriented crossover that places as much emphasis on comfort as it does on style. Even at such a relatively high price (for this loaded tester, anyway), those qualities make it an easy vehicle to recommend. Beyond that, it's further proof that the Ford Edge is far more than just a tweener in the company's product range – middle child or not, this CUV makes a bold, unique statement. 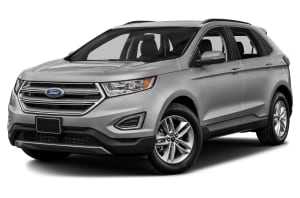