How Ford switched gears for the all-new F-150

Autoblog Staff
Editor's Note: This story is authored by Julia Halewicz, a senior editor with AOL's Custom Solutions Group. She holds a Masters in Journalism from NYU and has spent her career as an editor of various newspapers, magazines and digital outlets.

Last year on the Friday before Labor Day, the 2014 Ford F-150 pickup truck came off the Dearborn assembly line for the last time.

After the last seam was welded, the F-150 that had been so beloved by American consumers would begin the transition from traditional steel manufacturing to an aluminum body, and the second phase of Ford's 2007 blueprint for sustainability would begin. Jobs would be created, and Ford would deliver a stronger product to its consumers.

It was a moment Ford would call the biggest in the company's 111-year history.

For some, the change was almost unfathomable. How could a truck be made with aluminum, and why change what clearly was working very well for the company?

"We have a saying at Ford that leaders lead," said Doug Scott, the company's truck group marketing manager. "This was an ideal product to make with aluminum-alloy, because lightweighting made so much sense for a truck, because the extent to which you could take weight out of a truck, you could add more value to the customer in terms of more towing, more payload, more durability, more efficiency – so again all this required us to be out in front further out in front that we normally would be to make sure that we would deliver on all those expectations."

Ford began the planning process about five years before the first aluminum F-150 would come to market. The company had a lot of questions. What was customer acceptance of aluminum, could they build the truck, and could the truck be repaired out in the field? Finally, Ford needed to determine if there were enough materials available to support the demand for the F-Series.

Aluminum vehicles aren't unusual, but had never been built on the scale of the F-150 – approximately one every minute. Ford created two prototypes to determine if the product would meet and exceed consumer expectations. Any change to the vehicle had to be justified in performance, safety and economy. An aluminum truck needed to be safer, lighter, have increased payload, haul more, and have improved fuel efficiency. 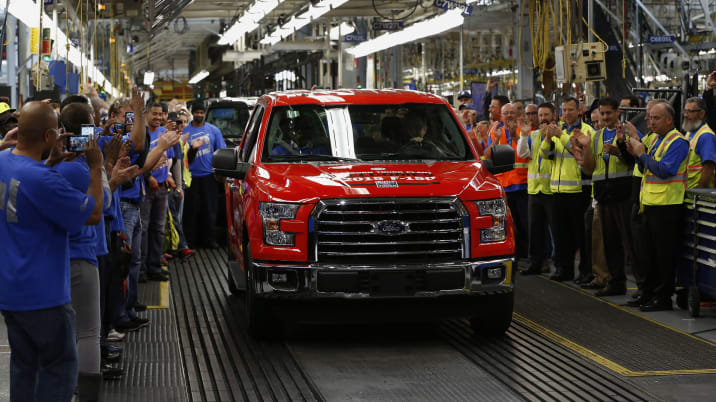 After driving the prototypes, Ford knew it was ready to move forward. Once the aluminum truck was ready to build, the next challenge was quickly transforming the plant. On Labor Day weekend, 1,100 semis lined up outside the factory to haul away the equipment used to manufacture the previous model and bring in the new. The city and state worked with Ford to coordinate the process. State police and the Department of Transportation assisted.

"We didn't want to shut Detroit down," said Bruce Hettle, vice president of manufacturing and 28-year Ford veteran, whose group would ultimately be responsible for determining the new assembly line process and the company's ability to deliver the vehicle.

Traffic lights were added to direct the flow of traffic, and southeast Dearborn braced itself for the change, although it felt like the auto industry braced itself as well. Detroit was buzzing.

"What was really, really the most exciting thing for me was, we would go to someone and say, 'Hey, we need your help to move these semis down this road,' and everyone would say, 'Absolutely, but let's talk about the new aluminum truck.' We talked to the police department and they'd say, 'Well, that's great... we'll help you, but is the truck really aluminum?' It just started to build this tremendous buzz of activity around the plant here," Hettle said.

It took four weeks to convert the Dearborn Truck Plant. The steel body shop was removed. Old robots were taken away and 700 new ones designed to work with aluminum manufacturing process had replaced them. A new process was put into place for stamping aluminum, and it was a mammoth undertaking for all involved.

The moment would become a milestone in the Ford Motor Company's history. The company has invested $359 million at the Dearborn Truck Plant, part of a commitment to invest $6.2 billion in plant-specific investments through 2015. 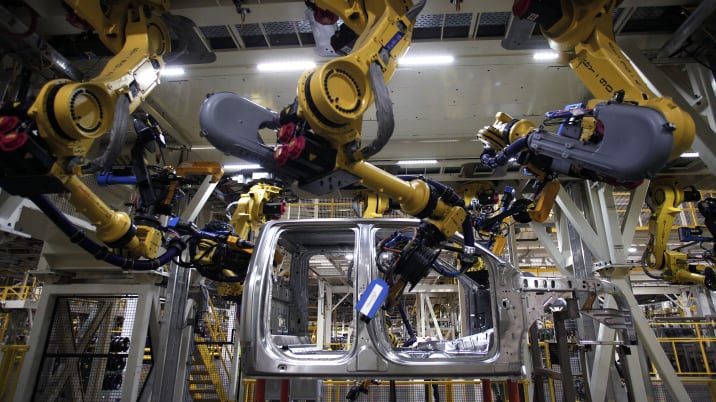 The Intersection Of Technology And Humanity

What's instantly noticeable at the revamped Dearborn Truck Plant is what's missing. "If you were in this plant literally a couple of months ago, you would see steel trucks going down the line and you'd see sparks and the joining technology. We would use spot welds, and we don't do that, as you can see," Hettle said.

And the workforce has grown exponentially as aluminum truck production ramps up. Approximately 850 jobs were added to The Ford Rouge Center site. Skilled trades employees, electricians and specialists received eight weeks of technology training to master the new manufacturing process.

They coexist with approximately 500 new body shop robots and another 200 robots at the subassembly and stamping operations. "We've spent a lot of time thinking through what's the right balance of a robot and a human, or an operator or team members. We think we have the right balance. Our teams are in there to help ensure quality and to make the judgment and the decisions appropriate to help ensure quality. But we use the robots to do the heavy work, the riveting and the part movement. We think we've got a great balance. We don't see a world where auto plants will be all machines without people," he said.

Since the truck has gone into production, along with the new robots, 1,550 new jobs across four plants were announced as well as pay raises for 500 entry-level union employees.

With the first of the new aluminum-bodied Ford F-150 pickups already in market, the consumer is feeling the benefits. "We've improved the power-to-weight ratio from 5 to 16 percent, depending on the powertrain," says Scott. "So the truck accelerates faster. It brakes in a shorter distance. It's a more durable truck. Aluminum is one-third the density of steel, so consequently we can thicken up gage the metal in all the surfaces that count... in the bed and in the fenders."

Aluminum made all of this possible. Pete Friedman, who has worked at Ford more than 18 years, is the manager of the manufacturing research department and helped lead the change.

The auto industry has been researching aluminum for more than 30 years and says the technology and materials were finally ready for the level of mass production required by Ford.

"Alloys have evolved a lot," he said. "We've gotten better aluminum alloys, higher strength, more formable, more joinable. So on top of that, body construction methods have gotten much better. Our ability to join and create very strong, stiff structures from aluminum has improved drastically over time."

While the technology was ready, Ford needed to determine if the public were just as ready, since aluminum had a reputation for being easily deformed. "Making parallels to how aluminum is used in aerospace and in the defense industry – I think really helped build that confidence," said Friedman.

"Some of the aluminum-alloys we are using can be heat treated after stamping to dramatically increase material strength. This increase in strength allows for thinner panels without giving up load carrying capacity which reduces overall weight. 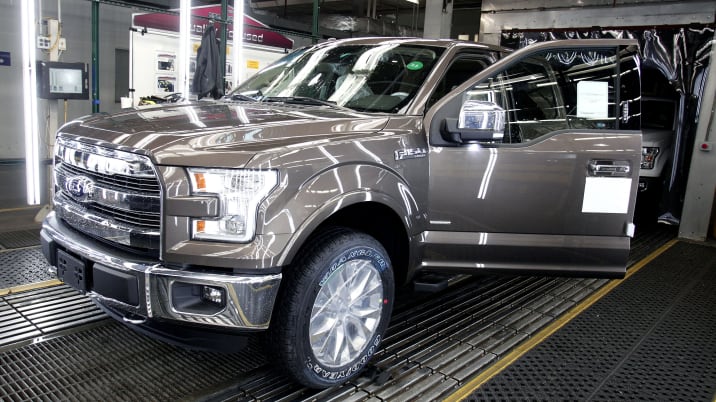 The density of aluminum is approximately one-third that of steel so it allows us to use thicker panels than steel and still save significant weight."

But the change required more than a vision – it also required a larger supply of aluminum sheet than what was available. So Ford worked with Alcoa and Novelis, rebuilding both suppliers' infrastructure to accommodate the increased demand for auto-grade alloys and to manage the scrap stream.
"It took a lot of trust," Friedman said.

The result has been beneficial to more than just the companies. One hundred percent of scrap is recycled, and approximately one-third of the vehicle is made of recycled material. The consumer benefits as does the environment. It's also a completely domestic process where metal is coming from one part of the country to create a product in another part, helping retain US employment.

Friedman likens the materials' change to a seismic shift in vehicle manufacturing on the F-150, similar to when cars went from frame to unibody construction. But the most visceral connection he has with the vehicle is that the aluminum panels will never red rust again. One of the original prototypes operates at the plant and has a huge gouge on the side. The three-year-old vehicle has withstood as many Michigan winters and still no rust has formed.

"Red rust on a pickup truck is such a symbolic thing for me about manufacturing in America and not to see that–basically to see a problem solved–is such a visceral connection for me," said Friedman.

"I think this is the tipping point for how cars and trucks are made," said Friedman.