Chris Bruce
The Buick Encore has been a massive sales success practically from the moment it debuted, and Buick recently decided to increase production to keep up with demand for the premium compact crossover. The Insurance Institute for Highway Safety recently put one to the test again, and the Encore earned a Top Safety Pick award. It's the first model from the brand to score the nod since 2013, according to the IIHS, and the rating also carries over to the 2015 Chevrolet Trax.

The 2015 Encore scored a Good rating in all of the IIHS' evaluations, including the 40-mile-per-hour, small overlap front crash test. That was a big improvement over the previous model the institute tested, which scored a Poor result in the overlap test. In the first test, about 13 inches of the lower door hinge pillar came into the passenger compartment, and the steering wheel airbag moved too far to protect the dummy's head. Improvements for the latest model year showed six inches of intrusion this time, and the airbags caught the dummy's head well. The dummy's sensors also indicated a low risk of injury.

The two CUVs missed out on the full Top Safety Pick+ because the IIHS scored the Encore as only having a basic front crash prevention system, and there was no such equipment for the Trax. To earn the highest mark, models need at least an advanced rating by the institute for this technology.

ARLINGTON, Va. - A small SUV is the first vehicle from the Buick brand to qualify for a TOP SAFETY PICK award from the Insurance Institute for Highway Safety since 2013. The Buick Encore's newly introduced, lower-priced twin, the Chevrolet Trax, also qualifies for the honor.

The Encore's award follows improvements to the SUV's structure for better small overlap front protection. The 2015 model earns a good rating in the small overlap test.

In contrast, the 2013-14 Encore rated poor in the test. The driver's space was seriously compromised with intrusion measuring as much as 13 inches at the lower door hinge pillar. The dummy's head barely contacted the front airbag before sliding off the left side, as the steering column moved to the right. The side curtain airbag deployed too late and didn't have sufficient forward coverage to protect the head.

In the latest test, the driver space was maintained reasonably well, with maximum intrusion of 6 inches at the door hinge pillar and instrument panel. The dummy's movement was well-controlled. The head hit the front airbag and remained there until rebound. The side curtain airbag deployed on time and had sufficient forward coverage. Measures taken from the dummy indicated a low risk of injuries in a crash of this severity.

The small overlap test replicates what happens when the front corner of a vehicle collides with another vehicle or an object such as a tree or a utility pole. To qualify for TOP SAFETY PICK, a vehicle must earn a good or acceptable rating for small overlap protection and a good rating in the Institute's moderate overlap front, side, roof strength and head restraint tests. The Encore's ratings in the latter four evaluations carry over from 2014. 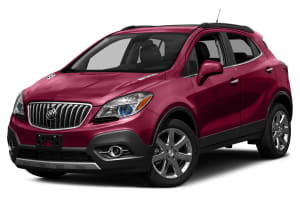