Lincoln has been treading water with the MKX. The crossover's sales were flat in 2014, and its appearance and mechanicals have been largely unchanged since its last redesign in 2011.

That changes this fall, when the redesigned 2016 MKX goes on sale in the United States with a more powerful EcoBoost engine, an upgraded cabin and a host of new comfort and safety features designed to make the crossover more competitive and increase its sales. The MKX debuts Tuesday at the Detroit Auto Show, though pictures leaked last weekend.

The new vehicle has at least 36 new features compared with the outgoing model, and perhaps the most significant is the addition of the optional twin-turbo 2.7-liter EcoBoost V6, which is expected to make more than 330 horsepower and 370 pound-feet of torque. That's a major jump from the naturally aspirated 3.7-liter V6, which is the only engine option available on the current vehicle. It continues as the standard engine for the 2016 model and is rated at 300 hp and 280 lb-ft.

The engines are paired with six-speed automatic transmissions. Front wheel-drive is standard, and all-wheel drive is an option.

Lincoln engineers focused on improving the driving character of the new MKX. The chassis is revised, and the rear suspension uses an integral link setup. It's also the first Lincoln to get adaptive steering. The body structure is updated and designed to keep more outside noise from the cabin.

The MKX was also redesigned with a focus on safety. The MKX is among the first Ford Motor Co. vehicles to get a new feature, called pre-collision assist. The technology will warn the driver if it senses a crash is imminent and apply the brakes. The technology is also launching this year on the European version of the Ford Fusion, the Mondeo.

Additionally, the MKX gets a 360-degree camera that aids with parking. The camera is mounted behind the Lincoln star badge in the middle of the split-wing grille. It extends to offer a view of up to seven feet around the perimeter of the crossover. Lincoln also added an auto hold feature, which keeps the vehicle from moving when it is sitting in traffic.

Lincoln underscored the MKX's new safety and technology with a more dramatic design for 2016. It has a swoopy appearance with fender flares similar to those on the MKC, and it's curvier and more creased than the outgoing MKX. Lincoln design director David Woodhouse said the new crossover was penned with a "strong, pragmatic" theme and moves away from the previous "wedgy" appearance.

"MKX is consistent with the recent Lincoln design language," he said.

That's punctuated with the familiar grille, though now it features horizontal blades and looks more like the one that fronts the MKC. The MKX is also the first Lincoln to offer full adaptive LED lights, which further punch up the design. 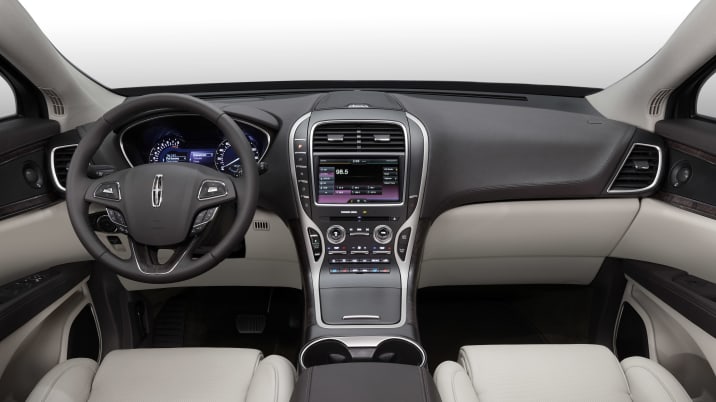 Inside, passengers get a considerably more upscale setting. Front seats that can be adjusted 22 ways are a new option; they also have four-way head restraints and adjustable thigh bolsters. The new lighting adds to the interior's luxurious feel, and it turns on in phases. The footwells light up first, followed in sequence by the cupholders, center pass-through and instrument panel.

Customers can further tailor their interiors with Lincoln's Black Label program, which adds greater levels of customization and service. Two new Black Label themes, which feature the romance of 1920s Paris and the excitement of horseracing, debut on the MKX.

The MKX is also the first Lincoln to offer Revel sound systems, which is Harman's top-of-the line setup designed for audiophiles. The agreement was announced in December, and the sound systems will be added to other Lincolns later.

"They've never been in autos before, and this is going to be an absolute point of differentiation for us," said Matt VanDyke, Lincoln's global director.

The refreshed MKX is Lincoln's third new product in three years, following the MKZ in 2013 and MKC in 2014. Though it hasn't had major changes in several years, the MKX was still the brand's second-best seller in 2014. Obviously, there's something to build on, and as the solid launch of the MKC has shown, consumers are willing to consider Lincoln's crossovers. In 2015, Lincoln hopes a few more will now consider the MKX.

DETROIT, Jan. 13, 2015 – The all-new Lincoln MKX, debuting today at the 2015 North American International Auto Show, is designed to attract a wide range of customers in the United States and beyond by offering more technology, engine choices and personalization options.

The all-new Lincoln MKX goes on sale first in the United States this fall, followed by other markets including China, Canada, the Middle East, Mexico and South Korea.

The Lincoln MKX further strengthens Lincoln's position in the global midsize premium utility segment, which represents 11 percent of the global automotive luxury market and is expected to grow to 12 percent by 2018. It is the one of the largest luxury segments in the United States, representing about one-quarter of the retail luxury automotive market.

More power, greater agility
Leading the engine choices for the new Lincoln MKX is the available advanced 2.7- liter twin-turbocharged Ti-VCT EcoBoost V6. It is projected to deliver more than 330 horsepower and more than 370 lb.-ft. of torque, based on preliminary test data.

The standard engine is a 3.7-liter V6, projected to deliver 300 horsepower and 280 lb.-ft. of torque, based on preliminary test data.

Both engines are mated to a six-speed automatic transmission with push-button shift and SelectShift®. Front-wheel drive is standard, with Intelligent All-Wheel Drive optional.

The Lincoln MKX has standard electric power-assisted steering and is the first Lincoln to offer adaptive steering.

"The new 2.7-liter EcoBoost adds a new level of performance to the all-new Lincoln MKX," said Chief Program Engineer Elaine Bannon. "The focus is on delivering a total personalized luxury experience for our client: performance, quiet ride, power and technologies that make life easier, all in an environment wrapped in rich materials."

The available front camera deploys from behind the Lincoln Star badging between the two front grilles. The camera system also offers a 180-degree split view, which can be helpful in looking out in cross-traffic situations. The 360-degree view shows up to 7 feet all around the vehicle.

Lincoln MKX has an ultrasonic sensing system with 12 sensors enabling the full range of available parking-assist features: front rear side sensing, perpendicular and parallel parking assist and park out assist.

Key driver assist and safety innovations added
The all-new Lincoln MKX adds pre-collision assist, which may help avoid or lessen the severity some frontal crashes with another vehicle or pedestrian in certain situations and conditions. If the system detects another vehicle or pedestrian, the system will first provide a collision warning and then the system will automatically apply braking if the driver has not taken any corrective action.

Also new is the Auto Hold feature, which relieves the driver from having to press the brake pedal continuously to keep the vehicle stationary in traffic. Auto Hold releases the brakes when the accelerator pedal is pressed.

First for Lincoln, to enhance driver visibility, available LED headlamps include a feature that adapts when accelerating from 0 to 35 mph by adding width to the low- beam pattern through the use of additional LED reflector elements.

Elegance in motion
The exterior design is dramatic, with a modern, contemporary silhouette and well- balanced proportions. Available adaptable full-LED front headlamps are subtly executed as blades, rather than projectors, aligned with the horizontal orientation of the split-wing grille.

The interior design language creates an open yet cocoon-like environment that is as quiet as it is beautiful. The push-button gear shift creates a dramatic open suspension bridge that flows from the instrument panel to the center console, providing two tiers of open space.

Further adjustments can be made through the four-way power head restraint and the power thigh extender. The thigh bolster deflates to make exit easier and reinflates after entry to the previous setting.

Always-on, built-in connectivity is provided through an available embedded modem. Via a smartphone app that communicates with the vehicle, the available MyLincoln Mobile app gives owners the ability to start, lock, unlock and locate their vehicle, as well as schedule a remote start.

The Revel Ultima system is standard on Lincoln Black Label editions and available on Reserve models. It features 19 speakers with point source architecture, positioning the tweeter and midrange speakers close together for superior audio quality.

A 13-speaker Revel system designed for the ultimate audio quality experience is available on the all-new Lincoln MKX Select and Reserve.

Two new Black Label themes
Lincoln Black Label will be available at launch with four designer themes – two of which are all-new. One is inspired by the fashion, lifestyle and art scene of 1920s Paris, while the excitement, passion and pageantry of high-stakes thoroughbred horse racing create the vision for the second new theme.
Modern Heritage and Indulgence also will be available on the new Lincoln MKX.

Upgraded Lincoln Experiences
When the driver with key fob is within approximately 9 feet, the lower LED daytime running lights gently brighten, while "welcome mat" is projected on the ground from the folded mirrors. Door handles are illuminated, too, tuned to the exterior color.

*In the United States, the midsize premium utility segment represents 14 percent of luxury automotive market and is positioned to be stable at this rate through 2018 (growth will come from the small premium utility segment). In China the midsize premium segment represents 17 percent of the luxury vehicle market and expected to remain stable through 2018. Source of data: IHS.
**MyLincoln Mobile App is available through a free download. The embedded modem is included and available on Reserve Equipment Group. Services included for four years. Text and data rates apply to usage.
***Driving while distracted can result in loss of vehicle control. Only use SYNC/MyLincoln Touch/other devices, even with voice commands, when it is safe to do so. Some features may be locked out while the vehicle is in gear. Not all features are compatible with all phones
## #