Within the next year, Ford will offer a brand-new adaptive steering system (unimaginatively dubbed " Ford Adaptive Steering"), and this week, the automaker invited us out to its proving grounds in Dearborn, MI to get a taste for how its new setup works. In function, Ford's system doesn't greatly differ from the majority of other adaptive steering units already on the market from companies like Audi or BMW, but consider this: Ford will be the first non-luxury automaker to offer this technology, and uniquely, the whole system fits inside the car's steering wheel.

Ford's engineers have worked hard to create a system that can be tacked on to the company's full lineup of cars, trucks and utility vehicles, and says that the adaptive steering will be uniquely tuned for each specific vehicle. The automaker will not confirm exactly which vehicle will launch with this technology, but for the purpose of our preview, we tested the technology in a 2014 Fusion – a vehicle with already-good behind-the-wheel feel, one that the company says best demonstrates its current steering efforts. 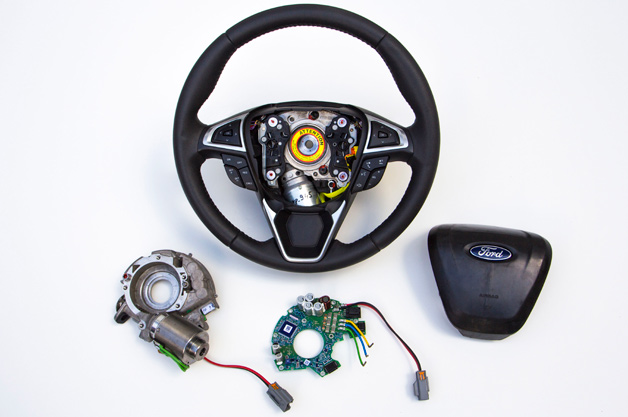 To be clear, this new adaptive technology is something that adds on to the existing steering system (electric, hydraulic, etc.) used in a vehicle. While electric systems like Ford's EPAS controls the torque being sent to the wheel – and being felt by the driver's hands – adaptive steering builds onto this technology by actually altering steering ratio and effort. This isn't a by-wire system like the one in the Infiniti Q50, and it's something that Ford could gradually expand across its entire lineup, from cars as small as the Fiesta to trucks as large as the Super Duty.


All the hardware fits right into the steering wheel, only adding about a pound or two to the car's overall weight.

It's an incredibly compact unit, too – as we said, all the hardware fits right into the steering wheel, only adding about a pound or two to the car's overall weight. It's a packaging masterstroke that should help make it easy to adapt it to all manner of the Blue Oval's vehicles without any significant engineering hurdles. How does it actually work? There's an actuator – an electric motor mated to a gearing system – housed inside the steering wheel. The actuator can add to or subtract from steering inputs, meaning adaptive steering actually adjusts the angle of the front wheels, it doesn't only vary the effort, or steering weight, that the driver feels.

Adaptive steering aids with both low– and high-speed maneuverability. At parking-lot speeds, you don't have to turn the wheel as much to execute turning into a tight spot, for instance, nor do you expend as much effort to do so. In fact, we sampled a Fusion that when stopped and in Park, only required one full turn of the wheel in either direction to explore its lock-to-lock range.

We then hit the test track, piloting the Fusion through a series of low-speed slalom exercises to test the differences with the system on and off. When activated, adaptive steering once again made it so there was far less effort to maneuver the car. When traveling at 10 to 15 miles per with the system off, steering effort was much greater and involved more shuffling of the wheel to properly negotiate the slalom. See a side-by-side example in the video below. 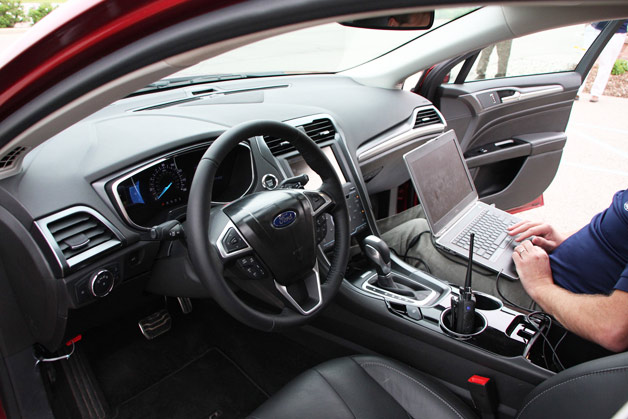 At higher speeds of about 50 mph, the system proved less noticeable, yet it still allowed for things like quicker inputs to the wheels and lane changes. The same could be said when we hit 80 mph on Ford's straightaway – changing lanes felt very similar with the adaptive steering both on and off, but with it activated, there was noticeably better overall feedback and stability, and the same could be said during more substantial turns. That vagueness that plagues many electric power steering systems – particularly just off-center – was gone with this adaptive unit.


Changing lanes felt very similar with the adaptive steering both on and off, but with it activated, there was noticeably better overall feedback and stability.

With the adaptive steering, there will be both normal and sport modes (the latter with a slightly quicker ratio), though we did note that the difference between the two, at least in our early test, was minimal. Again, the system is more pronounced at lower speeds, so there was some variation between normal and sport here – basically, the feeling of added weight to the steering. But at the 50- and 80-mph tests, sport didn't alter the feel too dramatically. That's probably fine, considering this system isn't designed for sports cars – it'll first be offered in a mainstream Ford vehicle.

In fact, it stands to reason that mainstream use is what Ford has in mind here, not precision steering for canyon carving in its sportier vehicles. That's a different tack than the Europeans using this technology, but it makes sense for the Blue Oval as a full-line manufacturer, particularly on its larger offerings. A system capable of making vehicles like an Expedition or Super Duty less of a burden to maneuver in parking lots and tight quarters figures to be far more beneficial to Joe Consumer.

As for the launch, there are still many aspects of Ford Adaptive Steering that are unclear at this time. First and foremost, pricing and packaging – Ford hasn't quite ironed out how much this technology will cost the consumer, and it's unknown if the steering system will be standard equipment, a standalone option or if the tech will be added in as part of a package. There's also the question about how to properly communicate how this system benefits consumers. Some folks could understandably be put off by it, but if it's lumped in with things like navigation/infotainment or optional safety systems, then buyers might be more apt to spec their vehicles with the system. It could even come standard on higher trim levels, Ford tells us.

That's all still being worked out, of course. But stay tuned for news in the coming months about where the system will show up first. Check it out at slow speed in the video below, and scroll beyond that for Ford's official release.

– New technology improves steering feel at all speeds, making any vehicle easier to maneuver and more enjoyable to drive

– Housed entirely within the steering wheel, Ford's newest steering technology is a smart solution that will benefit drivers in all driving conditions

DEARBORN, Mich., May 29, 2014 – Ford Motor Company is bringing to market a new generation of steering technology that will help make vehicles easier to maneuver at low speeds and in tight spaces. At higher speeds, the new technology will help make the vehicle more agile and fun to drive.

Adaptive steering changes the ratio between the driver's actions at the steering wheel – the number of turns – and how much the front wheels turn. In traditional vehicles, this is a fixed steering ratio. With Ford's new Adaptive Steering, the steering ratio continually changes with vehicle speed, optimizing the steering response in all conditions.

At lower speeds, such as when pulling into a parking space or maneuvering in tight quarters, the new system makes the vehicle more agile and easier to turn, as it dials more steering into the road wheel. Each low-speed maneuver requires less turning of the steering wheel.

Ford's system uses a precision-controlled actuator placed inside the steering wheel, and requires no change to a vehicle's traditional steering system. The actuator – an electric motor and gearing system – can essentially add to or subtract from a driver's steering inputs. The result is a better driving experience at all speeds, regardless of vehicle size or class.

Adaptive Steering will be available on select vehicles beginning next year. The system was developed for production by Ford in collaboration with Takata, a leading supplier of automotive steering and safety systems and a Ford Aligned Business Framework partner.