The word "iconic" gets thrown around a lot, but there are certain automotive designs that have endured the decades longer than most – and some of the best of them are SUVs: models like the Jeep Wrangler, Mercedes G-Wagen and, of course, the Land Rover Defender. The times, however, they are a-changing, so even these enduring off-road icons will soon be replaced. But Land Rover is not going to let its long-running core model ride off into the sunset unnoticed. 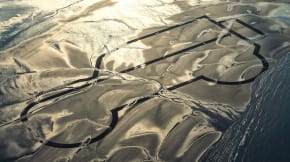 The current Defender will cease production (in the UK at least) at the end of this year, making room for an all-new model. So to pay it a fond farewell, Land Rover drew a giant outline of the legendary off-roader in the sand at Red Wharf Bay in Anglesey, Wales – the same place where the original Land Rover was first dreamt up some 68 years ago. To complete the endeavor, Land Rover pressed six Defenders into service, dragging chains across the sand to draw the vehicle's shape one kilometer (over 3,000 feet) across in the sand before the tide came in to wash it all away.

Fleeting though that endeavor may have been, Land Rover also announced three Celebration Series special editions of the Defender to mark its departure. There's a Heritage Edition in green with a white roof, an Adventure Edition with extra underbody cladding and off-road tires, and a top-of-the-line Autobiography Edition based on the closed-roof, short-wheelbase Defender 90 Station Wagon with two-tone paintjob, Windsor leather interior and an upgraded engine.

Although production of the current Defender, set to be replaced by a more modern model, will come to an end in December at the Solihull assembly plant in the UK, Land Rover says it's looking into continuing its production overseas for foreign consumption.