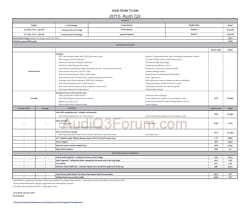 Audi only debuted the 2015 Q3 compact crossover for the US market at the 2014 Detroit Motor Show in January, yet that feels like a lifetime ago. However, the little luxury CUV is finally getting close to reaching these shores, and alleged pricing for it is leaking out.

According to leaked documents from Audi Q3 Forum (right), the premium compact crossover has a starting price of $32,500 (*plus an additional destination charge of $925), for an actual cost of $33,425. That covers the front-wheel drive model with a 200-horsepower 2.0 TFSI turbocharged four-cylinder engine and a six-speed automatic transmission. Upgrading to a version with Quattro that spins all four wheels brings the bill to $34,600 – $35,525 after destination charges. In case you wanted further proof, Audi's new Q3 teaser site confirms the starting price of $32,500.

German luxury cars often offer a mile-long list of options, but the Q3 appears to be surprisingly sparse, according to this leak. Premium Plus is available with MMI Navigation Plus for $1,900, a driver assistance package for $1,400 and power tailgate for $400. Both trims are offered with a sport package for $550, 19-inch wheels for $800, wood inlays for $350 and a black headliner is listed as a no-cost option.

It's the perfect time for the Q3's price leak too because the competing 2015 Mercedes-Benz GLA-Class with 208 horsepower is now confirmed with a price of $32,225 after its destination fee, while the all-wheel drive model goes for $34,225. Comparatively, the 240-hp BMW X1 sDrive28i asks $31,850 in rear-wheel drive spec or $33,650 to drive all four wheels, after their $950 destination charge. That makes the Q3 the most expensive of the German luxury CUVs by a surprising amount, though it looks like its standard equipment list will also be rather generous by comparison. Check out the gallery for all of the details.