Noah Joseph
Ford may have tied together much of its global lineup under the One Ford campaign, but one market where it still offers unique products is Australia. That will soon draw to a close as well, but before it does, the Blue Oval's Aussie operations are rolling out refreshed versions of its two unique products. For the moment, Ford isn't revealing much in the way of powertrain details, but it has shown off a couple of snaps of the revised products on its in-market Twitter feed.

First up is the new Territory. The SUV is neither based on a front-drive crossover platform nor on a truck frame, but shares its rear-drive underpinnings with the Falcon, taking it a step beyond the Falcon wagon alongside which it sits in Ford's Aussie range. Like the outgoing third-generation SZ Territory, the facelifted version is dominated by a narrow grille and larger front air dam, but further punctuates its big-chinned look with more rugged lower cladding and other metallic inserts that bring its look up to date.

And there's the Falcon, which Ford revealed in XR8 trim just last week and is now presenting in G6E 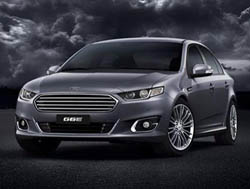 spec. If the XR8 is the performance model, the G6E is the luxury version, swapping in more refined trim like a chrome-slat grille (instead of a black honeycomb), chrome foglamp surrounds, less-aggressive multi-spoke wheels (instead of five-spokes) and a flatter hood (instead of a power bulge). Otherwise, it looks essentially the same as the one we saw last week, its facelift bringing it more in line with the smaller, front-drive Mondeo (which we know here as the Fusion) and other members of the Ford family.

These updates, expected to launch later this year, will have to keep the Territory and Falcon fresh until they're both discontinued with the closing of Ford's manufacturing operations Down Under, a move that will put a period on an 88-year history. After that, a version of the Mondeo/ Fusion will have to take the Falcon's role as Ford's large sedan while the Mustang assumes its role as performance flagship, and Territory buyers will have to look towards models like the Edge crossover and Everest SUV to meet their high-riding needs.
X