Erin Marquis
In the 1950s and early 60s, the dawn of nuclear power was supposed to lead to a limitless consumer culture, a world of flying cars and autonomous kitchens all powered by clean energy. In Europe, it offered the then-limping continent a cheap, inexhaustible supply of power after years of rationing and infrastructure damage brought on by two World Wars.

The development of nuclear-powered submarines and ships during the 1940s and 50s led car designers to begin conceptualizing atomic vehicles. Fueled by a consistent reaction, these cars would theoretically produce no harmful byproducts and rarely need to refuel. Combining these vehicles with the new interstate system presented amazing potential for American mobility.

But the fantasy soon faded. There were just too many problems with the realities of nuclear power. For starters, the powerplant would be too small to attain a reaction unless the car contained weapons-grade atomic materials. Doing so would mean every fender-bender could result in a minor nuclear holocaust. Additionally, many of the designers assumed a lightweight shielding material or even forcefields would eventually be invented (they still haven't) to protect passengers from harmful radiation. Analyses of the atomic car concept at the time determined that a 50-ton lead barrier would be necessary to prevent exposure.

Although hope is still alive for nuclear-powered cars – engines powered by lasers and Thorium salts have been suggested – it's amusing to think that there was a time when these cars were seriously considered the future of transportation. Our love affair with nuclear energy has waned considerably since the catastrophes at Chernobyl, Three Mile Island and, most recently, Fukushima.

Take a trip back in time to when creativity was out matched only by naïveté by checking out these nuclear-powered car concepts from automakers like Ford and Studebaker-Packard. Radiation suit not included.
1. 1958 Arbel Symétric 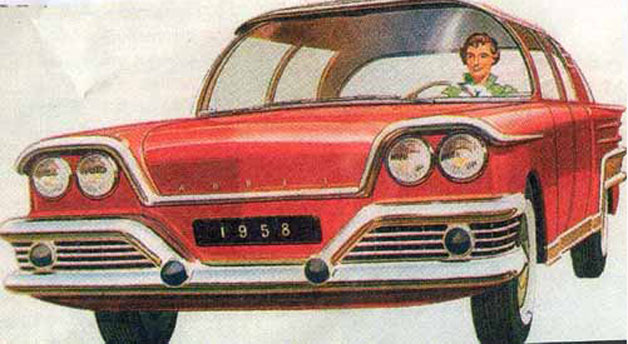 World War II was tough on Europe, and even long after the bombers were grounded, there was a push in Europe to do more with less. The Arbel Symétric came from a post-war research and development company interested in creative vehicles that saved on fuel.

A brochure from the era highlights the "Genestatom," a 40-kW nuclear generator that used a thermal-electric effect to drive a motor with radioactive waste. The nuclear fuel-heating source would only need to be switched out every five years. Among the space-age features on the Symétric were swiveling captains seats and glow-in-the-dark phosphorescent bumpers. Arbel never had the chance to develop their glowing car, the French government wasn't wild about the idea and the company quickly disappeared in 1959 under a mountain of debt. 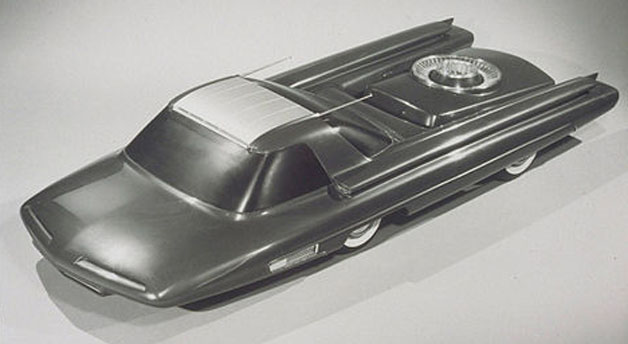 Despite looking like a futuristic muscle pickup with a superhero name, the Ford Nucleon never made it to a full-size concept. A model of the Nucleon was built by Ford designers in 1958 during the height of the atomic car craze. The Nucleon would have been powered by a small reactor in the rear, similar in design to how nuclear submarines work, employing what is basically a smaller version of a full-size nuclear reactor. Designers predicted that the Nucleon could travel 5,000 miles before refueling.

Their vision was to have a completely removable powerhouse inside the vehicle that drivers simply switched out once the nuclear fuel had been spent. The passenger compartment was pushed to the front of the car in order to provide maximum shielding from the nuclear pile in the back. Even so, the amount of lead and shielding needed to keep the DNA of the driver in good order would have made the car impossibility huge. Ford designers hoped someday the invention of some sort of lightweight shielding would allow the Nucleon to be fully realized, but such a material has yet to be realized. The Nucleon lives on however, as inspiration for the nuclear-powered cars in the Fallout video games. You can also find the original model at the Henry Ford Museum in Dearborn, MI. 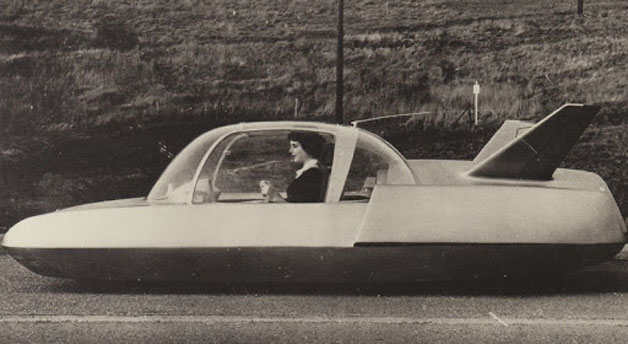 If any car could have inspired George Jetson's ride, it's the Simca Fulgur. Though it was never meant to fly, the plastic bubble top and hidden wheels make the Simca Fulgur feel like a space-age ride. It was yet another French design that was only meant as an exercise in design and never seriously considered for production. Officially unveiled at the 1959 Geneva Auto Show, this concept was meant to predict the cars of 2000. It was to be atomic powered, voice controlled and guided by radar. The Fulgur also use only two wheels and was balanced by another hot 50's technology - gyroscopes. 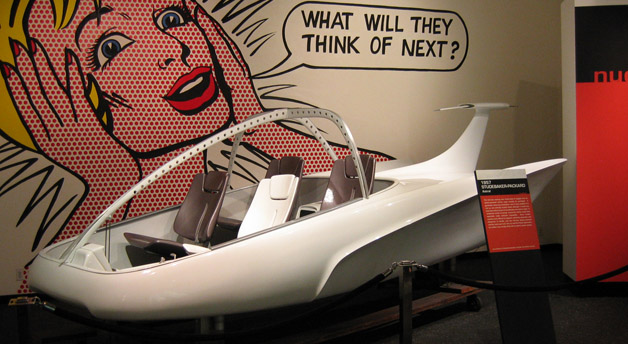 The Astral made its debut in 1957 at the South Bend Art Center, then was shown again at the Geneva Motor Show. This car went all out with its sci-fi styling. The entire car was balanced on one wheel using gyroscope technology and it was said to hover over water. To protect the driver and their passengers from radiation, the Astral would have been equipped with some kind of protective energy curtain, like a forcefield, that would make collisions impossible and certainly make the Astral's ionic nuclear engine seem a bit more reasonable. Studebaker-Packard didn't last long enough to see the wild future in which this car could be produced, as Packard itself disappeared a few years after the Astral was released, followed close behind by Studebaker. The concept car was shuttled from auto shows to dealership events before finally finding a home along with its more practical brothers at the Petersen Auto Museum in Los Angeles, CA. 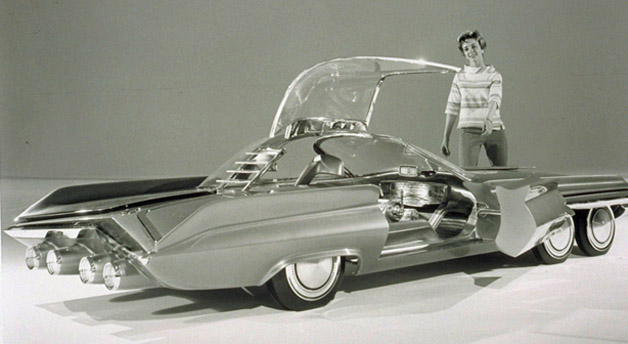 Ford's second atomic car entry was unveiled on April 20, 1962 at the Seattle World's Fair. The showcar contained a lot of pipe-dream technology that has become commonplace today, including interactive computer navigation, mapping and auto information systems, and it featured an interchangeable fuel cell and bodywork. One technology that didn't make it from concept to reality was its power source: a compact nuclear propulsion device. The car also featured six wheels for enhanced traction and fingertip steering, neither of which seem to be catching on today, either.

One of the most interesting things about this concept (besides its atomic power) was that it was a kind of modular car. The front of the car was meant to break away from the passenger compartment, transforming a large car into an economic capsule for running around town. Automakers and individual design houses have been fiddling with the idea of a modular car for decades – it remains a fascination to this day.
X