Recently, we took a vacation to Australia, because sometimes we have to get away from all of that other travel and good living that we withstand in order to bring you the latest car news. While there, we grabbed the keys to a Hyundai i40 Tourer, essentially the Sonata wagon we never got a chance to love here.

Even though it didn't have a manual transmission, it did have a diesel and, for reasons beyond that oil-burner, our enduring affections. No, this story will not include another plea for Hyundai to bring it to the US - it likely wouldn't stand a chance against our crossover- and size-crazed mania, but it's a brilliant fit for markets that appreciate tidy haulers. 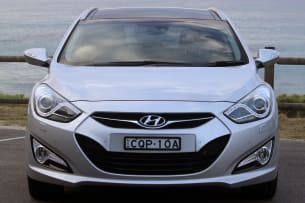 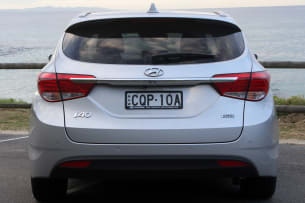 Having seen the conservative 2015 Sonata, we're already missing the days of Fluidic Sculpture 1.0.

Our first sight of the i40 Tourer, its Fluidic Sculpture snout and a dark-finish 18-inch wheel poking out from between two other cars in a Sydney airport parking lot, led to our first thought of it: "Hey, that's a good-looking car." It's a medium-sized runabout on Australian roads; compared to our 2014 Sonata, it's two inches shorter on a wheelbase that's 1.5 inches shorter, its width 0.7 inches narrower. It's the same height, but that number includes the roof rails on the i40, so it's actually about half an inch lower.

Those are tiny differences, but with that wagon cap giving the design language extra space to stretch out and a larger expanse of sheetmetal to counter the deep creases, it's got a balanced, long, low-to-the-ground vibe that scores excellent all-around marks without narcissistic extravagance. And the steep rake on the back glass underneath a prominent spoiler conveys a nice dose of flash. Frankly, having seen the conservative 2015 Sonata, we're already missing the chisel-heavy salad days of Fluidic Sculpture 1.0. 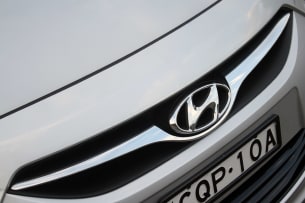 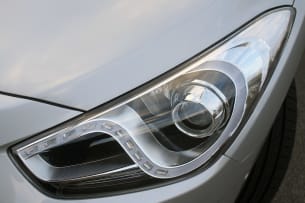 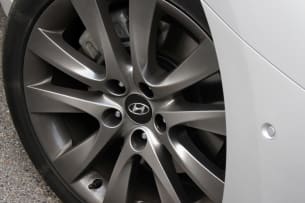 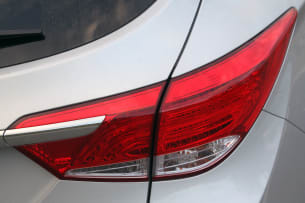 In 13 days with the i40 Tourer, we never found any cost-cutting soft spots.

All five doors open onto a grotto dark and cavernous, an architecture in black with a few whits of satin trim. Even with the shade on the panorama roof withdrawn, the smoked glass from front to rear will never let the ambiance get much beyond "Inviting Lair." Make no mistake, though, it is inviting: the steering wheel is thick and wrapped in leather, svelte seats are covered in soft hide, and materials look good while fitting together luxuriously.

Every fixture is solid, and real substance is communicated with every touch, push and pull. Nothing makes an unwelcome noise or squeak, and the blue lighting a nice touch that takes us back to the Volkswagen Golf from the Nineties, another built-beyond-its-price hatch. With the front seat set for our five-foot, eleven-inch frame, when we sat in the chair behind our knees didn't touch the seatbacks. The load bay comes with a cargo managing barrier (on all trims) and built-in areas behind the wheel wells – portioned off with plastic dividers – for small items. In 13 days with the i40 Tourer, we never found any cost-cutting soft spots.

We have to give a shout-out to the nav system for always getting us where we were going, even when we were told a destination was really hard to find. This is a rare experience of late, and we saw its opposite in another car we drove while in Oz. One example: when traveling under downtown Sydney through the Eastern Distributor tunnel, the Hyundai never forgot where it was; in the other car we drove, once we entered the Distributor, its amnesiac navigation would forget it had told us to do that and think we were on surface streets, so we spent the entire time underground listening to the system tell us to turn left or right in order to find an entrance to the tunnel we were already in. 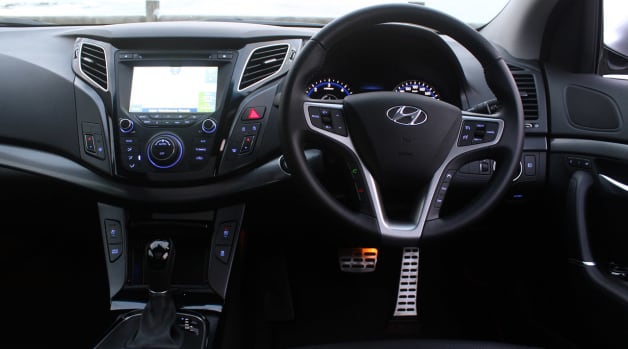 Pulling the 3,650-pound wagon was a 1.7-liter, common-rail direct-injected diesel with 134 horsepower and 236 pound-feet of torque. The good news was that the engine ran quietly and, tied to a six-speed automatic, it was unafraid to downshift and take advantage of its full torque load at 2,200 rpm. It was likewise perfectly fine to tug the wagon about in urban traffic or canter down the highway at 130 kilometers per hour. The less-good news is that it still doesn't provide a lot of power for a load-lugger on the plus side of 1.5 tons, so it needs hands-on attention to get up steeper inclines when running at highway speeds. You can find just such inclines at several places in the six-hour drive north from Sydney to Nambucca Heads on the central coast, a distinct deceleration cracking our highway meditation and triggering more right-foot boot.

The 2014 Sonata, for comparison, has 45 more hp and 47 fewer lb-ft, but at minimum weighs 220 pounds less than the i40 Tourer. The return to good news is that the shortcoming is a tiny and very specific price to pay for getting nearly 620 miles from seven-eighths of the 70-liter tank during each leg of our road trip. While we liked that math and it worked out to a shade over Hyundai's claimed 6.0 liters/100 kilometers (39 mpg on the US cycle) of combined driving - we got 38 mpg - our numbers include a lot of highway miles; we're not sure how the official numbers would hold up to sustained city driving. 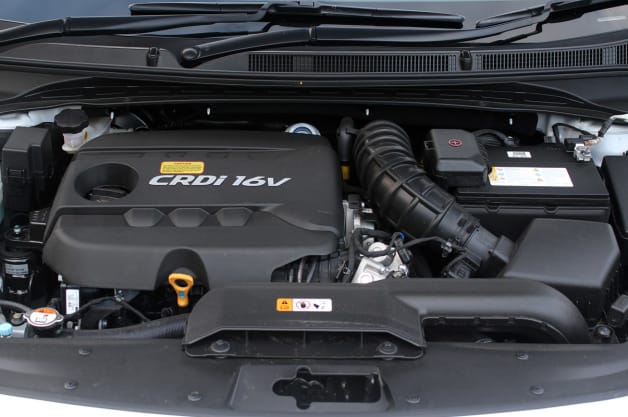 The ride delivered more good news, though, the little Hyundai holding onto its composure through gently curved rural Aussie back roads and over almost all surfaces. A well-engineered mix of resilience and absorption kept it easy to manage over nastily pockmarked stretches through construction zones and in industrial areas, such that our luggage, which included two hefty bottles of a high-proof, duty-free elixir, never came unglued. Only one particularly abrasive grade of concrete pushed its noise, vibration and harshness-mitigation measures past their limits, the i40 throwing its Fluidic hands up and telling us underneath the roar, "You're just going to have to deal with it." 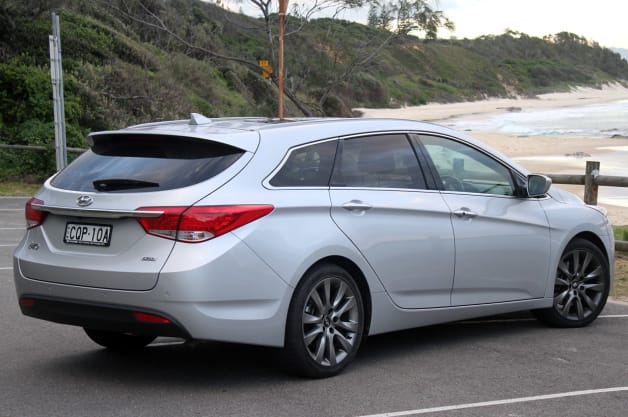 Even with the $3,200 price difference, it's an arguable tie, depending on what you want. You'll likely get similar gas mileage but undoubtedly get better handling in the Mazda – and less space – but the Hyundai is conspicuously nicer inside. Hyundai has been working its way up the sales ladder in Australia the same way it has in North America, usually in the top three or four after Toyota and Holden and swapping places with Mazda. It was the third-top-selling brand in Oz in May, and with offerings like the i40 Touring, it's not hard to see why, nor is it hard to imagine things getting even better for the South Korean brand.